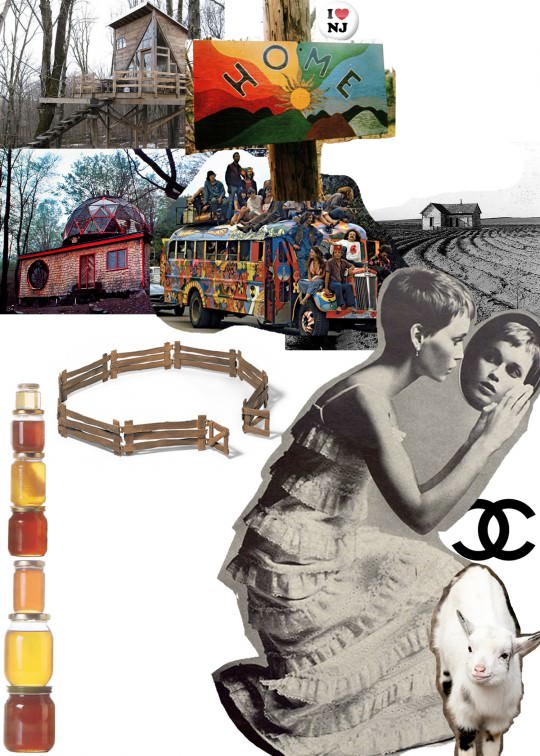 All names, hippie and given, commune and individual, have been changed to respect those soily dreamy kids and their soily dreamy mountaintop, save for the names of Nigh and me.

I. HARRISON AND THE MILK AND HIS BONG.

And then Harrison in his one shoe that is green and his one shoe that is purple and his hippie pullover that falls to his knees and is also green and purple, and with his pale red curly hair pulled back in a purple bandana, allowing us glimpses of his pale freckly face and his stoned blue eyes, he gets all angry and he comes stomping down to the Main House yelling, “CAN I HAVE MY BONG YET? CAN I HAVE MY BONG YET?” and Leap comes running down after him saying, “No no not yet” because in some act of girlfriendishness she has hidden away the bong. Harrison stomps around in angry circles all around the hilly green and he says to us, “Sorry, guys, I just have to deal with my anger, I had to take myself out of the circle because I told the guy to go fuck himself.” More stomping. When he is done, he walks towards us and says how he’s not normally like this here, it’s just that the situation with the guy—the guy who’d shown up with four guns, five kids, and a wife who never spoke, the guy who steals food from the commune and doesn’t do any work because, he says, he has to keep checking the internet to see if World War III has broken out yet—has gone berserk, and the energy of this place is really off right now, too high.

Normally this place is calm. Then Harrison starts talking about down there—how down there life was so hectic that he couldn’t handle it, none of it made sense to him; it all felt so senseless that he had to carry his bong around everywhere just to not totally lose it. But the catch was that they wouldn’t even let him carry his bong around. If he could have just taken the bong into the supermarket, just plopped the bong down in the shopping cart, wheeled it around, taking hits as he got shit done—well, maybe it’d have been OK. But they wouldn’t even let him do that. He is talking seriously and gesticulating gently. Leap is also looking serious from her cross-legged and huddled bowl-hitting position, looking up into his face and nodding in slow agreement as she pauses respectfully between hits.

One time, Harrison says, one time he went to the supermarket to get some milk and all he wanted was some fucking regular milk, and the supermarket had everything—lactose-free and two-percent and one-percent and skim, half-and-half and vitamin D-enriched and calcium-added—but all he wanted was milk, and he couldn’t find any. And he’s standing over there by the dairy aisle with his hands pulling at his hair, and he’s starting to freak—he wants to leave this place, but he can’t find the regular milk—and then this guy comes up to him, and stands there too, staring at all the dairy. The man turns to Harrison and says, in an Indian accent, “Excuse me, sir, I am sorry for bothering you, but where do I go if I just want cow’s milk?” and Harrison, Harrison was like, “I know, man. I know.”

(And I remembered how in college I’d go to Walgreens as a study break. I’d go there if I wanted to do something fun but still be productive. So I’d go to Walgreens to pick out new conditioner. I’d make a game out of it: reading the back of every bottle; putting my favorites aside and meticulously comparing each to each; slowly narrowing down my choices until I found The One. Anyhow, I was reminded of this but I decided to leave it unmentioned.)

I grew up in an elite, small-minded bubble in Manhattan, where I went to the fanciest schools. In college, I studied philosophy because I wanted to understand, What is a good life? I got no satisfactory answers, but I did fall for a pretentious boy-man who informed me that humans are born half-animal and half-god; it’s up to us to decide which side to indulge. “Most people become animals,” he said. “Just look at them.” I felt broken down by mindsets like his, which were concerned with swallowing more and more book knowledge in the egotistical hope of becoming godlike. My happiness and self-confidence plummeted.

While I was anxious about not being godlike enough, this anxiety was chased by a deeper fear: my world felt phony. We were all good at words—we could write very tricky papers on ethics—but when it came to real things, the objects and energy that we used every day, or being happy or being kind, we didn’t know how those things worked or where they came from.

After graduation, I worked a retail job in Manhattan to stave off having to choose a career that would drain me of the energy I needed to focus on what I loved: creative writing. I told my father that I hated cooking and cleaning, and I hated the thought of having a family, because I feared I would have no time to write. “It’s a good thing you’re relatively attractive,” he said. “Just make sure you marry a man rich enough so you don’t have to work and can hire a nanny, a cleaning lady, and even a cook.”

His solution sucked, so I went to my doctor and groveled for Adderall so I could have the energy to work and read and write without sleep. My doctor said no. I cried, bought stilettos, and found a dealer. With my new drugs, I could zone in on heavy-handed texts that I couldn’t stomach before, I could pound out words on the keyboard without emotions or anxiety slowing my flow, I lost my appetite and lost weight, and whenever that fear came back I’d just snort more.

One day I got a phone call from a friend. “My buddy Nigh is in New York,” she said. “He doesn’t have a place to stay. Can he stay with you?” Nigh came from the prairie. Unlike me, he had never been told that he could be anything he wanted: he’d been told that life’s expensive and he’d better quit dreaming. Nigh had had enough. He was tired of feeling complicit in the destruction of the earth simply by being an American consumer-citizen, tired of watching time be sucked away as he sat behind screens, tired of not being able to see the value of his labor except in the form of a paycheck. So armed with a little savings (and a credit card), Nigh quit his job and began bumming around the country in an attempt to live out his favorite word: free.

Nigh was gorgeous and grimy and had a flower tucked behind his ear. I showed him around, and grew irritated by how slowly he moved. He just grinned at the life around him, not asking anything of it, soaking it in. Occasionally he’d tag a wall: “DO WHAT YOU WANT TO DO.”