Telling the truth about lying. 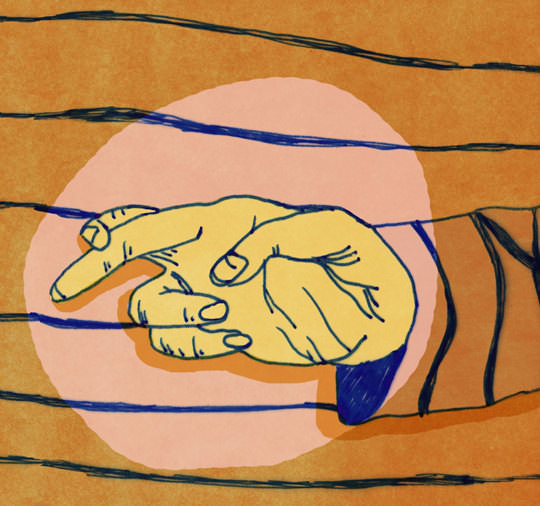 I started kindergarten in China without a parent at home. My mother and my father were in America, this place that the extended family I was staying with showed me on a map, and whose distance they tried to demonstrate by moving furniture around in the living room. When that didn’t work, they took me outside to our garden, where we grew sour, green grapes in the summer, and drew pictures for me in the dirt.

“We’re here,” my grandparents told me, pointing. “And your mommy and daddy are there.”

But the “there” they showed me was something I could see and touch; the “there” where my parents were I could only see in the photos they sent to us, accompanied by letters filled with promises big and small: that they would bring me to America one day to live with them, that I would get an electric keyboard the very day I arrived, that they would buy me a necklace made of real pearls, that I would one day go on a plane and fly through clouds.

Before my father left, he read me picture books in bed every night, hoisted me on his shoulders when I couldn’t sleep, and took me on long, wonderful walks at night through our neighborhood. One of the books he read me was about a young boy who goes on an adventure to India, where everything glitters with gold and princes ride through the streets on elephants. I was two and a half when he left. Three when my mother left.

It was soon after that that I started the Chinese equivalent of kindergarten. At home, my family spoke Mandarin—the country’s official language—so I had trouble keeping up with the other kids in my school in Shanghai, who spoke to one another in Shanghainese. I understood most of what they were saying, but whenever I tried to respond in their dialect, I sounded like someone with a speech impediment, stuttering and stammering and making weird O shapes with my mouth. I communicated in my own made-up patois that was one part mispronounced Shanghainese, three parts Mandarin.

“She’s probably just stupid,” I heard one kid say to another.

I wanted desperately for the other students to like me, to find me interesting, but nothing about me seemed interesting enough, even more me. So I came up with a new tactic.

“My parents live on a boat,” I told some kid during lunch. “They keep whales as pets. My dad knows how to fly a plane. That’s how he got to America. Once I touched lightning, but guess what? I didn’t die.”

It didn’t work. No one believed me, and I had exactly zero friends.

Meanwhile, I told my aunts and uncles and grandparents that I was having the time of my freaking life at school. I told them that I was friends with everyone, that my best friend was the daughter of a judge and she brought me orange juice every morning. I told them that we learned new songs every day and that the teacher praised me for my singing in front of the entire class and that she told everyone that they should learn from me. I told my family that the teacher took us on field trips almost every day, to the zoo or the movies. When my grandfather picked me up from school in the afternoons, I’d ride on the back of his bicycle and from the moment he started pedaling, I’d begin to tell him all sorts of outrageous lies, like how once, at the zoo, I had been chosen to ride on an elephant and I did it with such bravery that everyone clapped and the teacher had even cried because of how proud I had made her.

Eventually it got to the point where my auntie called up the teacher to thank her for all that she had done for me. She told my teacher that I had been going through some difficult times because my parents were living in America, and she had been worried that I might find it difficult to adjust to life without them on top of starting school, but that everyone at home was grateful to my teacher for filling my days with trips to the zoo and the movies.

“There was a pause,” my auntie told me years and years later. “And then your teacher goes, ‘Well, that does sound terrific. I wish I was that good of a teacher, but unfortunately, we’ve never done any of those things.’ At first, I was puzzled when I realized you were lying to us. I thought to myself, My niece isn’t the kind of child who lies. But then, I realized you were being extraordinarily strong. You were protecting us. You knew we were worried about you, so you tried to save us from worrying by lying to us and telling us that you were flourishing.”

“Mmn,” I said, embarrassed by her theory that my lies were heroic acts and by my theory that I was just a loser kid who wanted attention.

When I moved to New York to live with my parents, I was five years old and I had to learn a whole new language. Learning a language when you are not a baby turns you into a baby. A baby with the face and body of a non-baby. A baby who cannot articulate any of your feelings or needs or wants. A baby who cannot prove to the world that you are smart, that you are capable of complex thoughts, that you are more than the language you do not yet know. I pissed my pants the first time I needed to go to the bathroom, because even though my parents had taught me to raise my hand straight up in the air and say, “BATHROOM!” if I needed to pee, they hadn’t taught me what “Go ahead” meant, which was what my teacher said to me. Not knowing what to do, I remained in my seat, praying I could hold it in for another few hours, and then suddenly, the entire class was shouting at me while I sat there pissing myself.

In my first year in America, I went to my babysitter’s house every day after school. She watched over me and a few other children. When my mother picked me up, I told her that I was friends with every single kid at my babysitter’s house. That they saved their chips from lunch and gave them to me. That they hugged me every hour because I was so cute. If my mother noticed that every time she came to pick me up, I was always alone in a corner, and that the other kids didn’t wave goodbye to me like they did to one another—if she noticed, she never said a word. She was merciful that way.

When I learned English, I started to lie in two languages. In fourth grade, my best friend Hanzhi told me that there was a midget in his class who was like a foot smaller than everyone else, and I took that story and made it about me and told everyone in my class that I had a friend back in China who was so small that he could actually die from taking a dump unless someone held him up and prevented him from falling into the toilet and being flushed away. My father told me that he knew of some distant cousins who had eaten a cat, and so in seventh grade, when my biology teacher said, “You know, in some countries, people eat cats and dogs,” I had the idea to blurt out, “That’s true! I’ve eaten a cat! And it tastes like just chicken.”

For the next two years of my life, I didn’t go a day without hearing some kid say, “Break me off a piece of that kitty-cat bar!” or “Meow…yo, her mouth is watering because she thought she heard a cat!”