An open-ended conversation about cultural appropriation. 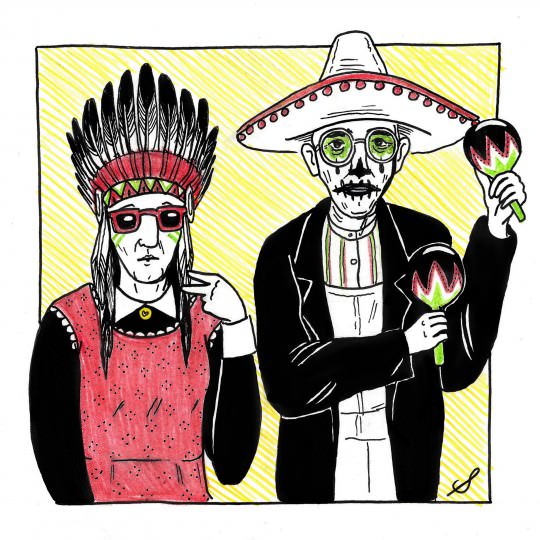 All of us here at Rookie have been thinking and talking about cultural appropriation for a while now. In case you’re not familiar with the term, it’s when someone from one culture borrows something from another culture, changing or removing the meaning of that thing in the process. It can be obviously disgusting and overtly racist, like the old tradition of blackface, or more subtle and ambiguous, like a non-black person wearing doorknocker earrings. Or somewhere in between, like wearing a feather headdress in your music video.

We’ve been trying to figure out a good way to address this topic on Rookie. Since there’s more than one valid way to feel about it, and since Rookie is large and contains multitudes, we thought the best way to cover multiple angles on the subject would be to throw a bunch of us together in a private Facebook group and talk it out.

The result is below. (And, a caveat: Since this is a conversation that we had, not a formal article that anyone wrote, no one is being super careful about their language or what they’re expressing. It’s best to read this as what it is, a conversation among friends/colleagues, rather than a treatise or a Statement of Rookie Beliefs.)

ANAHEED: Hey, everyone. I’ll start by saying that I’m gonna ask a lot of devil’s-advocate-type questions throughout this conversation. I am not TRYING to be an asshole—I’m trying to push the discussion into new areas. But also! I have some ignorant, asshole-y thoughts about this subject that maybe you will remove from my brain! For starters: I do understand, as anyone who is not terrible does, how wearing blackface or donning a “sexy Pocahontas” costume is a gross and racist thing to do. But there are so many gray areas for me (a person with a lot of white privilege). Like, when Gwen Stefani wore a bindi in the ’90s, I did not think twice about it, but (1) the ’90s were a different time, man; and (2) I was (a lot) younger and even more ignorant than I am today. But even today, I think it’s OK if Björk wears a kimono. Is that just ’cause I’m white?

JAMIA: I’m less bothered by things like Gwen Stefani’s bindi wearing (even though I honestly find it annoying) and more disturbed by her using Harajuku Girls as stereotype-affirming puppets to make money, branding an existing movement kind of like she discovered it, and capitalizing on what Margaret Cho described as a “minstrel show.”

I read this fascinating book a few years ago about blackface minstrelsy called Love and Theft. It talked about the problems that emerge when marginalized folk are dispossessed of their identities due to “cultural thievery.” I think Stefani’s case is an offshoot of the same sort of icky dynamic of cultural “celebration”/reappropriation/control/repurposing for personal privileged purposes. Gwen can play with a bindi all she wants, but she won’t be judged, taunted, hated, or unsafe in certain places for wearing one, because she exists in a body that aligns with the dominant paradigm.

ANAHEED: I’m glad you mentioned Gwen. I don’t actually find the No Doubt video fiasco particularly interesting, but do any of you have any thoughts about it?

SUZY: You know what’s funny? I used to think Gwen was Latina when I was a kid, because of her chola style back in the day. It made me admire her so much more. When I found out that she wasn’t, well, it was kind of a blow. I still love her as a musician and a songwriter—but every look she ever had was stolen. It’s kind of a bummer, but this video really didn’t surprise me given her track record for borrowing things.

ANAHEED: Didn’t shock me either! I do see it as sad evidence of how insulated you can be if you’re a rich person in America. But I also have a lukewarm respect for the fact that they owned up to their bullshit, which is more than most people do? I dunno. Like I said, I honestly barely care. Maybe I should care more.

LAIA: I never had a problem with her chola style (I wouldn’t call it a phase, because it is part of her style for sure) nor with her Indian stuff, because I understood where it came from.

MARIE: I grew up in Southern California, and in the cities where there was a large Latino population it was just natural to take in their traditions even if you weren’t Latino yourself. I never really thought too much about it until now, when cultural appropriation is such a hot issue. The environment I grew up in is a huge part of me. Ninety percent of my friends growing up were Mexican. I speak more Spanish than I do my mother’s native language, I love mariachi music and my lowrider jams, and my classmates and cousins were cholas. So because Gwen was from Anaheim, I totally got it. That style she had was pure ’90s SoCal. We all wore Dickies with tank tops, canvas belts with the initial belt buckles (usually of your boyfriend’s first name) and dark lipstick. It was the norm.

But when she had the four SILENT Harajuku Girls following her around everywhere it was strange. Like, OK, here’s four Japanese girls (I don’t even think they were all Japanese?!) following around this white woman and not saying a word. GWEN, DO YOU LET THEM SPEAK? And now I bet if you did some word-association about Harajuku with a random white American person they’d most likely respond, “Oh, you mean the line at Target?” first and not the area in Tokyo. So, shit like that feels weird and wrong.