There’s so much to look forward to.

Sunday Video: Ask a Grown Woman With Tegan and Sara

Hazel
Maddie of the blog Hexgrrrlfriend wrote this thought-provoking blog post about juggling her feminism with her desire for the male gaze. I think it’s a good example of how no feminist is perfect and a reminder that every feminist participates in/admires things that are traditionally “unfeminist.”

Danielle
While my feelings about Facebook are well documented, I might have found a tool to help make it a less invasive but still useful website for people who are reluctant to give it up entirely. Benjamin Grosser developed a tool called the Facebook Demetricator, a browser extension which removes all of those annoying little red boxes telling you how many messages and comments you have waiting for you, and just lets you do your thing. A lot of people resent the constant need to be on Facebook, particularly the way it encourages you to spend a lot of time replying to comments you would normally let slide; there’s a lot of pressure to be a part of the herd. When I resist by not commenting and “liking” updates constantly, I feel like I’m using the site wrong, or I start to get that nagging feeling that I could be doing more to be more a responsive friend, even though I’m doing nothing wrong. The Demetricator helps alleviate that pressure a little bit. I tried it out with a dummy account, and I think it’s a pretty stress-free way to use the site. If you took my advice and ditched Facebook, the Demetricator also works on removing the numbers from “likes” in other places on the internet; when you hop on Amazon, it just shows you that “people” like Harry Potter, not that 2,456,923 people like Harry Potter. It’s a good, free tool for removing a little bit of socially induced anxiety and pressure.

Anna
Collectors Weekly posted this fascinating interview with a photographer who collects and displays the suitcases owned by those who resided in mental institutions. In the past, people with mental illnesses were so stigmatized that often their humanity was stripped away; this photo series serves as a stark reminder of the rich private lives that were ignored when we dismissed asylum patients as “crazy.”

Tavi
This piece in the New York Times has lots of mantra-worthy quotations from a bunch of stylish and smart plus-size fashion bloggers. Inspiration of the aesthetic and life varieties awaits you.

Lately there have been rumors of a Boy Meets World spin-off. Like any fan of the show that brought us the greatest love affair of the past century (Principal Feeny and myself, in my dreams), I was all, TELL ME MORE TELL ME MORE LIKE DOES IT HAVE A CAR? And also, do its characters hop in said car and drive across a Farmville-esque plain as their lives flash before their eyes? Rembert Browne does some hard-hitting journalism at Grantland to bring us the facts.

I can’t stop listening to Tame Impala’s new album Lonerism. This week they released this awesomely psychedelic animation to accompany one of their best songs, the propulsive, hypnotic ballad, “Feels Like We Only Go Backwards Now.” Put it on and space out.

Petra
Mila Kunis is going to be an executive producer on a docu-drama about the Women’s Lib movement in the ’70s!!! Freaking out. It sounds totally awesome!

Pixie
In this beautifully written essay, a woman who grew up as a member of the Church of Scientology describes her family’s involvement, her mother’s job as an “auditor,” and her own experience being audited by her mother (the process is explained in great, and lovely, detail by the author). A unique insight into an organization that is somehow known for both its intense secrecy and its well-known secrets (thetans, Xenu, etc.), the piece is respectful and sympathetic, giving the reader an insight into how it feels to grow up inside of a bubble and how things that may seem strange to the outside world become completely normalized when your entire world is built around them: “I don’t remember thinking of myself as different from other kids,” Stella Forstner (a pseudonym) writes, “but then there was nothing visibly Scientologist about me—nothing I had to do or couldn’t do because of my parents’ religion. Like most children, I was well attuned to strangeness among my peers and not particularly sensitive about showing my curiosity or judgment: a neighbor had some Mormon friends, and I was baffled as to why they weren’t allowed to drink soda—never in their whole lives? And what could soda have to do with a religion anyway? I may have thought of Scientology like others see their own religious practices, but I never thought of it as a religion: if I could have phrased it as such I would have described it as something like a scientific philosophy.” The piece is the first in a series, and between the combination of gorgeous writing and the serious questions about faith, religion, and how we form our beliefs, I can’t wait to read Part Two. 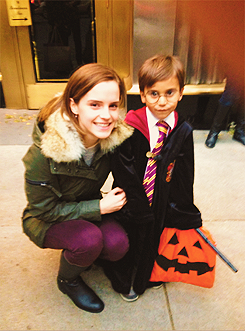 Hermione + a five-year-old boy dressed as Harry Potter for Halloween? Be still my heart.

Stephanie
People endured a lot to vote—long lines, bad weather, navigating superstorm Sandy damage—and my hat goes off to all of them. My favorite determined-to-vote story is the one about a 21-year-old woman in the Chicago suburbs who went into labor, but stopped to vote in her first presidential election on the way! She’s going to have a great story to tell her daughter one day. ♦