Thinking of everyone affected by the storm.

Sunday Comic: The Best Song Ever #2

Jenny
I was lucky—beyond lucky—to have been relatively unaffected by Hurricane Sandy. Where I live in New York, there are a few downed trees and mangled power lines. My Facebook newsfeed is a strange mix of people posting about how to volunteer and donate to communities devastated by Sandy and jokey posts about cabin fever and cheese/baked goods/alcohol consumption over the past few days. Natural disasters like hurricanes affect everyone equally, but recovering from a hurricane like this is not the same for everyone. Those with resources, those with money, those of us who are able-bodied, those of us who have cars and do not rely solely on public transportation, those of us who have salaried jobs and so can afford to miss a few days of work will undoubtedly have a much easier time recovering from Hurricane Sandy than those who are elderly and/or sick, those who cannot afford to miss work because they are paid by the hour, those who do not speak English and struggle to receive crucial information about how to get aid, those small-business owners who are barely staying afloat and cannot afford to lose business for a week or possibly more. Michelle Chen writes about this disparity that has been made gapingly obvious by Hurricane Sandy at In These Times. I love her. I love what she’s writing about. I love New York, and I want my city to get well. I want my city to take care of its most vulnerable residents.

Pulitizer Prize winner David Rodhe also writes movingly and smartly about some of the massive inequalities exposed by Hurricane Sandy.

If you live in New York and want to help out and get involved with community organizations—many of whom have been doing necessary and incredible work in underserved neighborhoods for years—I would suggest checking out Occupy Sandy over at Interoccupy.net. Lots of good up to date information on needed donations and volunteer opportunities with community organizations who are working with residents of areas that were hard hit by Sandy.

CAAAV, an amazing community organization that serves NYC’s low-income Asian immigrant and refugee population, has been doing amazing work in Chinatown, where many of the residents are low-income, non-English speakers, and/or seniors living in public housing. This update from CAAAV reveals some of the urgency and the need to pitch in, if you can, to help the city’s most vulnerable residents.

There’s a super cool bike initiative where folks are riding supplies over to Red Hook and distributing them to folks who live in public housing, mostly low-income Latino and African American residents.

And also, A LOT of media attention has been given to New York and New Jersey, but let’s not forget that the hurricane first swept through the Caribbean, taking hundreds of lives and destroying hundreds of thousands of homes in Jamaica and Haiti and Cuba, even if the news media has long moved on and lost interest in that part of the world. The hurricane has exacerbated an outbreak of cholera in Haiti, a country that is still recovering from the 2010 earthquake and has been dealt one hard blow after another. The United States is not the center of the world. I’m still waiting for the news media to acknowledge that, but until then, we have this wonderful post by Garry Pierre-Pierre on the Guardian’s blog.

On a final, non-Sandy note, the second issue of Illuminati Girl Gang is out! It’s the zine of my dreams, featuring art, photography, poetry, collage, and fiction from some very talented, weird, and funny ladies, including Rookie’s very own Emma Dajska!

Tavi
Remember that amazing hilarious Jesus restoration painting from a month or so ago? Someone made a cake of it. 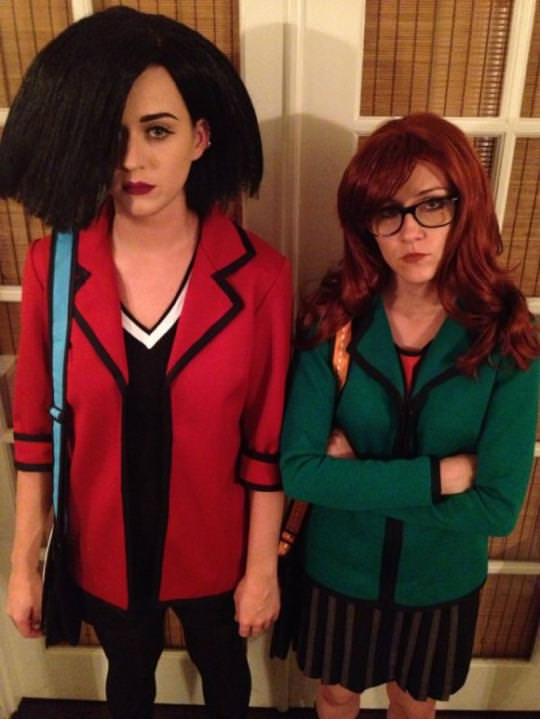 This photo’s been floating around online all week so I’m not sure where I saw it originally. All you need to know is that Katy Perry and Rookie pal Shannon Woodward were bitchfacin’ Daria and Jane for Halloween, right down to the cartoon outlines. A+++++++.

Anaheed
A 200-year-old skeleton was discovered beneath an old tree that was uprooted by Hurricane Sandy in New Haven, Connecticut. There are so many things that are perfect about this story: that it happened right before Halloween, that it was discovered by a man named SILAS FINCH who was “searching for old coins” in the tree’s root bulb, and that people in the surrounding area immediately turned the discovery into a local legend—one guy near the scene said, “You think it’s the hurricane? I think a dead man trying to tell a tale.”

Emma D.
I love happy endings. I really liked the idea that after Jedi knights had defeated the Emperor, the light side of Force filled the galaxy forever. But poor Luke Skywalker is certainly gonna suffer again—this week Disney bought the rights to the Star Wars saga. The company is releasing Episode VII in 2015 and they are going to produce the new one every two or three years. The internet blew up with memes of Disney Princess Leia, musical Stormtroopers or new design of the Death Star. Some people are psyched to share the new Star Wars with their kids, but the vision of Hannah Montana as the new Queen of Naboo scares me more than Darth Vader’s creepy wheezing. And Harrison Ford is just too old to save everyone’s asses again.

Rose
This simple website that tells you where you can go to vote on Tuesday (THIS TUESDAY!) is totally profane but so useful. ♦