Only in My Dreams

All of my experiences are as much imagined as they are lived.

Look at the Stars 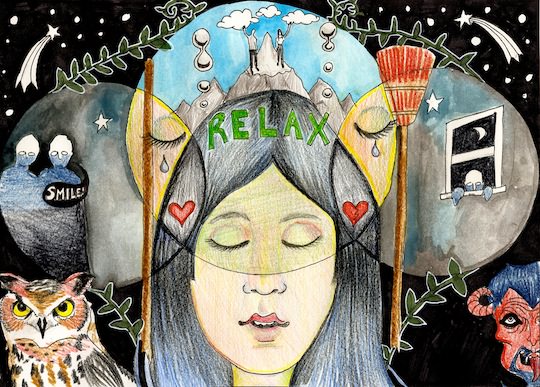 I have heard people talk of near-death experiences—that moment when they understand how precious their lives really are, and realize they aren’t ready to die—and how that moment, like all other heart-pounding, life-changing experiences, eventually deteriorates, fades into a distant memory, and loses its total claim on you as it morphs into just a thrilling story told in group settings.

I have never feared for my life. I have never been attacked by someone. I have never had a serious disease. I have never fought for my safety. I ask myself all the time if the amount of misery I have had in my life is unfairly small, and if I deserve more. And then I worry that something unthinkable will one day happen to me, that I will eventually be punished for having too much when other people have so little, for being lucky enough to say things like “I’m going to die if I have another slice of pizza.”

The closest I have come to knowing that I’m about to die is in my dreams, and saying that makes me feel even more guilty. But that’s how it’s always been. I access fear in this place where I cannot control my surroundings, where I cannot rely on my privilege, where I cannot plead my life back into existence. My dreams, which never announce themselves as dreams, have given me memories that have often felt more real than anything I have experienced in my so-called real life.

My father came to America with a broken broomstick in his suitcase, because my grandparents believed there were no broomsticks in America. “Tape it back together,” they said, “and then you can sweep with it.” My mother was president of her class in middle school, and she organized a penny drive for poor children in America. Then she went home and waited for my grandmother to return with whatever measly ration of rice they were allowed for the month. During the Cultural Revolution, all food was rationed, so even if you had the money to buy it, you could not get more than was allotted to each family. My mother told me that most children back then had visible ribs. When I told her I envied her perfectly hairless legs and arms, she explained that she, like millions of other children who lived through the Cultural Revolution, couldn’t grow hair on their legs and arms because they were badly malnourished growing up.

“It’s unreal to think about,” my parents would often say.

“Can you imagine that?” my parents asked me. “Children turning in their parents and then watching their mother or father begging for their life before being shot in public.”

I couldn’t. But in my wildest dreams, sometimes I could.

There were days when my parents started to tell me another harrowing story from their childhood, and I said, “I really need to study for my math test.” And they apologized for talking too much about the old times, for talking too much about this extraordinary experience they lived through. But I have had dreams where I have held a sobbing parent in my arms and said, “I’m sorry you suffered so much. I’m sorry I can never understand what it’s like to have suffered like you suffered.”

I went to Paris for the first time when I was 18. I made friends with some girls in my language program, and then ditched them two weeks later because they didn’t understand me. (I was 18!) They didn’t grow up listening to punk rock and wanting to revolt against everything. I wanted to sleep on bridges, but I was afraid of the cold. I wanted to move out of the dormitory I was living in and move into Shakespeare and Company, but I was afraid of the bedbugs.

The next summer, I went back to Paris and sublet a studio on a tiny street near Rue de la Roquette. Strange men followed me down the street wherever I went, day or night. They touched me without asking my permission. They asked me if I was from China or Japan. They told me to smile. They told me that I looked lonely. They asked me if I had a boyfriend, or a husband, or a lover.

At night I had dreams that strange men were crawling into my bedroom from my open window to rape and murder me, and no matter how fast I ran, no matter how cleverly I dodged them, they were always lurking around the next corner I cleared. I’d wake up in my bed shaking, but comforted to know that it was only a dream, and then I’d fall asleep without shutting my window and wake up in the middle of the night to find that the strange men had entered my bedroom again and that my dream had come true. I would have to spend my entire life running. Panic would set in, and then I’d wake up and realize that I had been dreaming within a dream. Must close my window, I’d think, but, drowsy from a fitful night of dreaming, I would fall asleep again only to realize I’d had a dream inside a dream inside a dream, and the whole thing would repeat until it didn’t seem possible that I could tunnel any further, and then suddenly, without warning, it was over.

When I went to grad school for fiction writing, I fell in love with a poet I’ll call Owen. The first night we met, he told me he wanted to read me Tristan Tzara under a tree. He wrote pornographic poems in the library. He dropped acid to induce visions. He once told me he wanted to “destroy” himself so that he could be born anew, which sent me into a spiraling panic. I loved him so much that I dreaded sleeping at night, because it meant a period of time when I could not be awake and consciously thinking and touching and experiencing him. How could I go on if he destroyed himself? What would be left for me, who was so pathetic and needy and dependent that I couldn’t go one single day without needing him to lift me up so that I did not have to lift myself?

Owen and I broke up the summer before I was supposed to move to the south of France.

“Is it beautiful over there?” my friends asked me after my first month in Avignon. “Do you feel like you are living a dream?”

But when I went on holiday to Morocco with a few friends, I started to have nightmares about watching Owen get beaten to death while I stood by helplessly, hysterically sobbing. I began to dread falling asleep at night.

“If you are alive just hit ‘reply,'” I wrote in an email to Owen. “You don’t even need to write anything in the subject line or anything in the body of the email. Just send me an empty email. I just need to know you aren’t dead.”

He never wrote back.

A few weeks ago I had a dream I met his current girlfriend. She was beautiful and wearing flowers, and I was wearing an ugly brown sack that smelled like raw sewage, but I didn’t care. “I’m just so happy to finally know you,” I said.

Once, when I was 10, my mother dropped an old thermometer she had brought from Shanghai, and it shattered on the ground, scattering little silver orbs across our linoleum floor. When I bent down to examine them, my father shouted at me, “Don’t touch it! These thermometers are filled with mercury.”

The element mercury? I wondered. The planet Mercury?

“It’s extremely dangerous. If you eat it or touch it, you can die of poisoning. Do you understand?”

“Yes,” I said. “I won’t touch mercury.” And as soon as those words came out of my mouth, I knew I had to touch mercury. For days, I lingered near the medicine cabinet and asked my mom incessantly, “Wait, those thermometers have mercury in them, right?”

One afternoon when I was alone in the house, I decided to take the thermometer out of the cabinet and made a whole show of pretending to measure my temperature. “I’m so sick,” I wailed to the walls. “I cannot live unless I measure my body temperature!”

I took the thermometer out of my mouth, smashed it on the ground, and watched the mercury spill out, slow and hypnotic, just as I had remembered it. I knelt down, pressed my belly to the ground, and crawled across my living room floor like a serpent, inching toward the mercury, daring myself to lick it.

“That’s adorable,” past boyfriends have said when I told them about trying to eat mercury. “Are you sure you didn’t dream this?”

In all of my dreams, the one thing I have never experienced is death.

“What does it feel like to die?” I asked my father one night when I was a child and I couldn’t fall asleep.

“No one knows,” he said. And in a moment of surprising candor, he told me not to worry. “You won’t remember being dead. It’s like when you’re asleep. You don’t remember what it’s like to be asleep. You just remember falling asleep and waking up. The only difference is that when you die, you don’t ever wake up.”

I want to be the first baby to remember what it was like to be born, I wrote in my middle school diary. But it’s already too late.

I guess something else I have never experienced in my dreams is being born.

Do I have to be accountable to my memory? Do I have to prove what I remember really happened? What would happen if we treated the things we did in our dreams as real memories? What would it be like if we understood memories in our dreams, if we could enter each new dream with memories of what we’ve already dreamed? Nightmares are nightmares because you never get wise to them.

Picasso said, “Everything you can imagine is real.”

Lorca wrote, “Nobody is asleep on earth.”

So I will be careful. I will not attempt to distinguish between what was real and what was dreamed. I know, in many ways, all of my experiences are as much imagined as they are lived, and knowing that has never made any of it less real. ♦