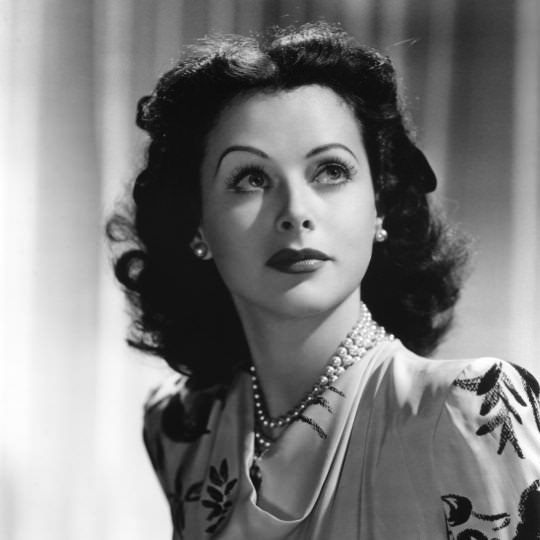 Once upon a time, long ago and far away, I was tasked with helping to clean out a boyfriend’s great-aunt’s attic. She had died a year or so before, which was very sad, because by all accounts she was an awesome woman. I know for a fact that she was an awesome woman because some of the things that my boyfriend and I got to take home were her Secret Trashy Books. Valley of the Dolls? Check. A 1960s, fresh-from-the-obscenity-trials edition of Lady Chatterley’s Lover? Check. And best of all: Ecstasy and Me: My Life As a Woman, the erotic memoir of the ’40s film star Hedy Lamarr.

I had no idea who Hedy Lamarr was when I read this book. I just figured her book was trashy! Which it was! (It was so trashy, in fact, that Hedy later went on to sue the publisher for printing too many made-up sex scenes.) But here are three things to know, for the beginner: She was frequently referred to as “the most beautiful woman in the world.” She more or less invented your internet connection. (I know, I know! More on that later.) And if her autobiography is at least a partially reliable indication, her life was devoted to the fine pursuits of sex, being a super-glamorous movie star, and DEFEATING HITLER.

Hedwig Kiesler was born in Austria on November 9, 1914. By the age of 18, she was busy breaking the rules for what ladies were allowed to do on film. In the 1933 Czech movie Ecstasy, she (a) appeared fully nude in a skinny-dipping scene, and (b) faked an onscreen orgasm. She was the first woman credited with doing either of these things in a feature film, and the rumor that she’d actually had sex for the scene that comprised both firsts dogged her for a long while afterwards. In fact, her onscreen “orgasm” was achieved by an employee of the studio’s poking her in the butt with a safety pin—she made an ow-face, it looked like an O-face, history was made, and everyone went home and had a nice lunch.

But Hedy (as she’d later be known) was not done making history. Unfortunately, as so many intelligent women do, she married a jerk. A Nazi jerk, to be precise. He was an arms dealer, and his idea of a good time was being a controlling weasel who forbade his wife to pursue acting. He reportedly bought multiple copies of Ecstasy to prevent people from seeing it, because nothing says “I love you” like attempting to destroy your partner’s career and chances of independence. Am I right, ladies? (No, I am not right, ladies.) When he was done being a possessive, jealous ass, he’d invite some of his Nazi scientist friends over for dinner, where they’d discuss which new technologies Hitler thought were super keen, like remote-controlled torpedoes. Meanwhile, Hedwig (as she was still known), the pretty Jewish lady who had appeared naked in movies and hence was obviously a total bimbo, was right there, listening. Listening closely.

What happened next is shrouded in legend, but I’m going to tell you the most awesome, probably partially made-up version of the story, which is: One night, Hedwig Kiesler told her Hitler-loving husband that she wanted to look really special at the party they were attending, so she was going to just wear all of her jewelry, OK? And then she left the party. Forever. Now, this is the part of her story we know to be true: she used whatever cash she had to escape to America on the Normandie, a luxury liner that the studio executive Louis B. Mayer happened to be on at the time. For reasons best described as totally sexist, he was reportedly skeptical about the possibility of relaunching Hedwig: “You’re lovely, but…I don’t like what people would think about a girl who flits bare-assed around the screen.” But she convinced him, and the story goes that by the time she got off the boat in America, she was ready to start her career as a movie star by the name of Hedy Lamarr.

Hedy Lamarr: movie star by day, Nazi-fighter by night. Because here’s the thing about Lamarr that no one realized at the time: she just so happened to be a scientific genius. Hedy didn’t drink, and rather than attend glitzy Hollywood parties, she stayed home, in a room that she’d outfitted with a drafting table, so that she could work on her inventions in her spare time. Understandably, her intellect was not terribly challenged by a Hollywood system in which her “dark, exotic” looks condemned her to deliver lines like “I am Tondelayo. I make tiffin for you?” (In 1940s Hollywood, an Austrian-Jewish woman with brown hair was about as close as many producers would get to casting a “woman of color,” and hence parts of Hedy’s movie career are, shall we say, less than admirable.) She later summed up her acting career thusly: “Any girl can be glamorous. All you have to do is stand still and look stupid.” And so, when she met the avant-garde composer George Antheil, Lamarr got to talking about her plan to metaphorically punch Hitler and her controlling ex-husband in the face. With science.

The problem with remote-controlled torpedoes, you see, was that they used only one frequency. This made it easy to jam that frequency, sending the torpedoes off target. What a successful torpedo would need, Hedy believed, was the ability to use several frequencies, depending on convenience—to detect which ones were open, and then hop onto those at random. So she worked with Antheil to create a secret communications system, somewhat informed by the mechanism in player-pianos, that allowed for such frequency-hopping. The system that Lamarr and Antheil created is today known as spread-spectrum technology. You may be familiar with this process from all of the many times that you complain that your cell phone or computer cannot “find a signal.” That’s right: you would not be able to read this website were it not for Hedy Lamarr.

So, Hedy Lamarr was a gorgeous genius who spent most of her days straight-up fightin’ Nazis—do you guys think she was actually Wonder Woman? I think she might actually have been Wonder Woman. I mean, come on.

But the end of Hedy’s life was a pretty sad one. At first the Navy disregarded Hedy’s invention and told her to stick to selling war bonds; and because she and Antheil gave the patent to the military for free, the inventors never made a penny off of their idea. By the time Hedy started winning awards for her invention, she was an embittered recluse who wouldn’t even leave her house to receive them. The world is like this sometimes—even brilliant people who always do their best work can wind up getting the short end of the stick.

Which is not the best takeaway from this story! Here is a better one: even though she could have coasted on her looks, Hedy took herself seriously, used her gigantic brain, and worked really hard to do the right thing, even in an era that couldn’t appreciate it. Which is something to remember the next time someone tells you pretty girls are stupid, or that girls aren’t good at science. Yes, the next time someone is a sexist dink, or people won’t listen to your genius idea because of a stereotype about what People Like You are capable of, just flash back to Hedy, who changed the world even when no one would listen. ♦