We Tell Ourselves Stories in Order to Live 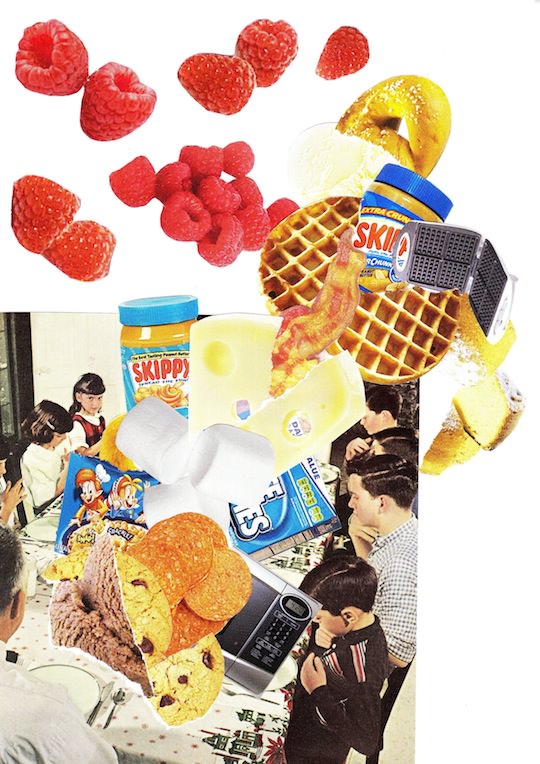 It’s been said that necessity is the mother of invention—we think weird cravings in the middle of the night are a way better motivator. Trying to come up with something resembling a meal using minimal effort and whatever is in the fridge leads to some inspired concoctions. Here’s a roundup of some of our more edible results.

Waffle Sandwiches
DILEMMA: You have peanut butter and jelly, but no bread on which to spread them. Do you forgo your lunch? Do you eat these condiments directly from the jar, the way the cavemen ate their peanut butter?! You’re kind of freaking out over here. SOLUTION: Enter toaster waffles, the greatest invention since sliced bread. Instead of smothering them with syrup, use them as the foundation for your sandwich. My favorite combination is peanut butter with peaches. Something tells me a waffle BLT won’t be quite as magically delicious, but who knows? —Anna F. 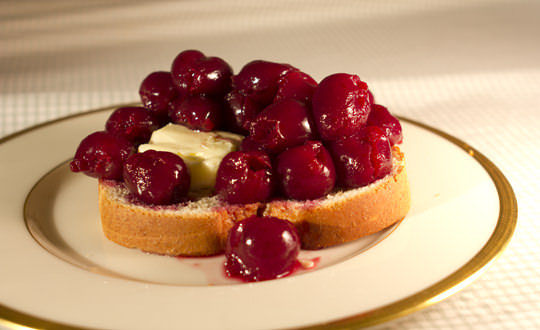 Fie (aka fake pie)
One of the worst things in the world to crave is pie, because (a) who has pie lying around unless Paula Deen is your mom, (b) good pie is rare and delicious, and (c) even if you go to the store to get a frozen pie, it’s still labor intensive and you’ll forget all about your craving while the dang thing heats up in the oven. UNLESS YOU KNOW HOW TO MAKE FIE. Now pie is what? Buttery, sugary pastry and some sort of gooey fruit filling. So toast a slice of bread, butter it till it’s dripping, put sugar and cinnamon all over it, and then open one of those cans of fruit in the back of your pantry: peaches, apples, pineapples, mangos, cherries, mandarin oranges—anything will work. Put several spoonfuls on your toast, put more sugar on top, and: FIE, Y’ALL. (In related news, if it’s specifically pumpkin pie you’re craving, you can make Pumpkin Pie in a Can: Open a can of pumpkin-pie mix, add milk and sugar, and stir.) —Krista

Breakfastghetti
One time, I really wanted to eat leftover pasta at 8 AM, but I felt like it wasn’t breakfast-y enough. So I put the pasta and some sauce in a frying pan, cracked an egg into it, and scrambled it all together to make a spaghetti scramble, and it was so good that I make it on purpose now. If I have convinced you, make sure you put olive oil in your frying pan so the spaghetti doesn’t stick. —Gabby 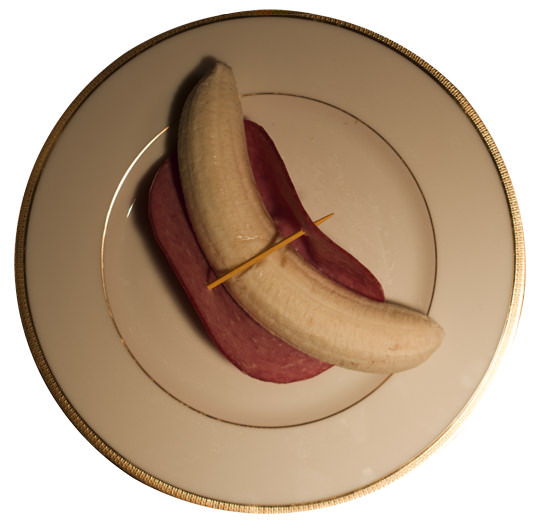 Meat Banana
The Meat Banana is my favorite snack. I don’t know if I came up with it, or if my mom did, but it’s pretty easy: You peel a banana, wrap a slice of bologna around it, and eat. Now that I’m “grown up” I don’t eat bologna anymore, because it was all I ate when I was little and I pretty much OD’d. So now I use a piece of ham instead. Still the best. —Laia

Raspberry Everything
The grocery store had bags of frozen raspberries on sale one week, and soon my freezer was overflowing. After getting sick of smoothies, I discovered that raspberries taste amazing in pretty much any dessert. Put them in brownie mix, cookie dough, pancake batter, or anything else you’re about to bake/cook. Then you can kid yourself that whatever you’re making is super healthy. It’s got fruit in it! —Anna F. 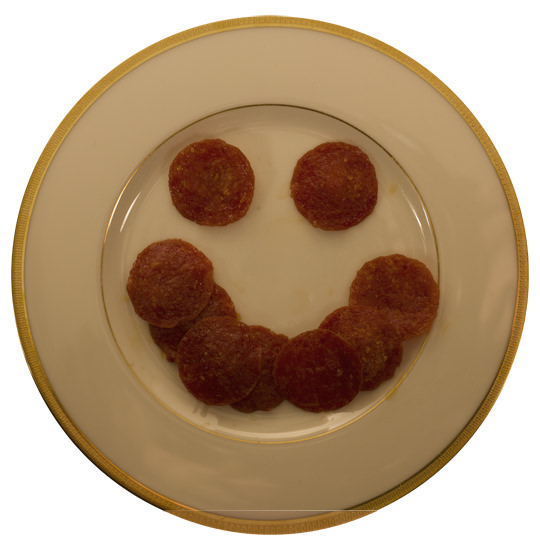 Pepperoni Chips
My friend and I invented this new childhood classic: Put pepperonis in the microwave until they turn into crispy chips. –Lauren P.

Cake Waffles
This is exactly what it sounds like. Put cake batter in a waffle iron and VOILÀ, YOU’RE DONE. It makes the task of cake-baking less daunting because you don’t have to use the oven, and it’s soooo much quicker. PLUS IT’S IN THE SHAPE OF A WAFFLE. I served these with ice cream and sundae toppings at my 16th birthday, and they truly made the night, convincing me that teen-movie moments can happen IRL. If there is one complaint I have about John Hughes (besides this), it’s that Molly Ringwald never ate any cake waffles. —Tavi 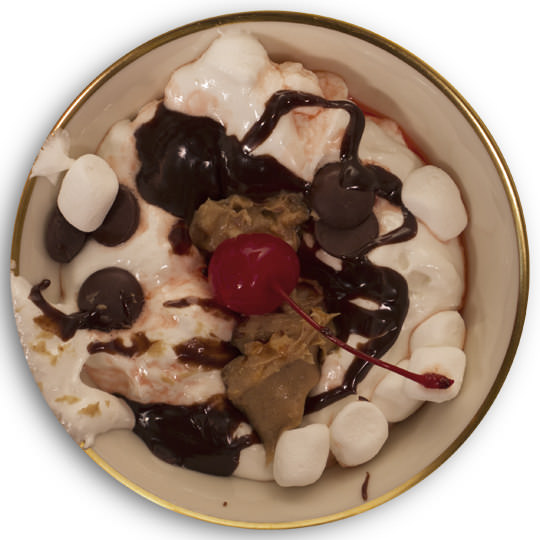 Marshmallow Soup
Yup. Stick a few marshmallows in a bowl and microwave them for about 30 seconds. They’ll get big and puffy and look like they’re about to explode, and then they’ll shrink back down as soon as you open the door. Stir them around with a spoon so they become a big, sticky, fluffy sludge. Add in Rice Krispies, Nutella, peanut butter, and anything else you might have lying around. Eat this one quickly, since marshmallows can harden as they dry out. Then make more. –Anna F.

Strawberries With Sour Cream and Brown Sugar
While I don’t know the true origin of this combo, it is a treat that has been in my family for as long as I can remember, and strongly associated with spring and picnics. Here’s how it’s done: take a strawberry, dip it in sour cream, dip it in brown sugar, take a bite, repeat! Because of sour cream’s standard partnership with savory foods like baked potatoes and burritos, people often ask me, “Don’t you mean whipped cream? Or cream cheese?” Folks, it’s sour cream all the way. The tart flavor balances perfectly with the sweetness of the strawberries and sugar, creating a whole new flavor experience! —Leanna

Super Babies
This is my name for one of my favorite late-night snacks, which consists of Morningstar Farms veggie-bacon strips, shredded cheddar cheese, and seasonings. Preparing the bacon can be tricky. I put four or five strips on what should be a microwave-safe plate, but never is, and place it in the microwave for 30 seconds to defrost the bacon. Then I pat the strips with a paper towel. It usually takes another two minutes of microwaving to get a crispy texture. If they’re still rubbery, I treat them like a slap bracelet and gently flick them against a plate. (I think this helps with the grease.) I shred some cheddar cheese on top—I prefer Tillamook Extra Sharp or Cabot Seriously Sharp—and add some freshly ground pepper and/or hot sauce, and it’s delicious. —Phoebe 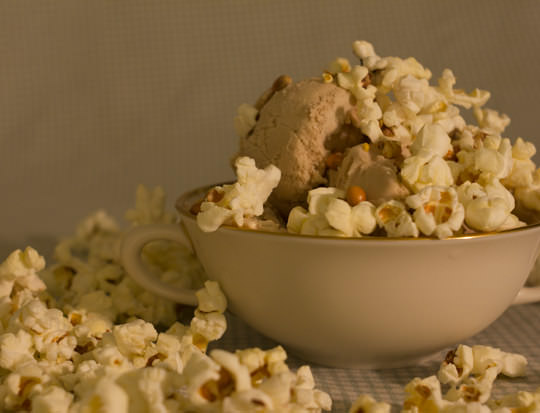 Popcorn and Ice Cream
In “Slumber Party,” my favorite episode of the original Beverly Hills, 90210, Donna Martin (Tori Spelling) revealed her deep, dark secret: she likes using popcorn as an ice cream topping. WHAT IN THE WHAT? When I first saw it, I was curiously hungry. So I had my own slumber party and totally made my friends try it—and it was delicious! It has that sweet-and-salty combo I really love. I used Orville Redenbacher and plain old vanilla, but really, the world is your oyster, but better than an oyster, because there’s ice cream. —Marie

Chocolate and Cheddar Cheese Popcorn
One time I was alone at my friend’s house, because I was feeding her cats while she was on vacation, and I was going through her pantry looking for snacks. She had nothing to eat. Literally nothing. What does Danielle eat? I wondered as I rooted through her cupboards. The only semi-edible things I found were some old “fun size” Hershey’s chocolate bars, which actually crumbled when I bit into them, and some very stale cheddar cheese popcorn in a holiday tin. (It was July.) But no one here is a quitter, so I melted the dusty, crumbly bars in a bowl and drizzled the chocolate over the popcorn. AND IT WAS DELICIOUS. Melted chocolate and cheddar cheese popcorn. Do it. —Krista

Whatever Ice Cream
I have a handy KitchenAid ice cream-maker attachment, so whenever I have milk and cream on hand, I can whip up fresh ice cream in 20 minutes. I throw in whatever other ingredients happen to be lying around, and have created a few masterpieces. Last week I treated my roommates to peanut butter and chocolate ice cream with chunks of chocolate-covered pretzels. –Dylan 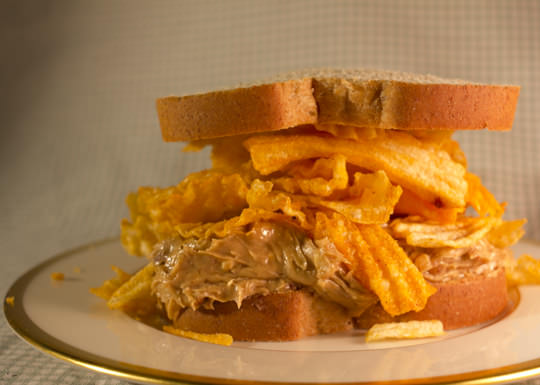 Peanut Butter and Cheddar & Sour Cream Ruffles Sandwich
In junior high I came up with a lot of weird after-school snacks on the random. One of my favorites was a peanut butter sandwich with Cheddar & Sour Cream Ruffles. The idea for this combination probably happened accidentally, like I was eating a peanut butter sandwich and the chips separately, then had a WILD URGE to put them together. My mom used to buy Jif, but I’m curious to try my modern-day favorite, Peanut Butter & Co.’s White Chocolate Wonderful. —Marie

Now go forth and experiment! ♦