Make Your Own Fragrance

Mad-scientist up a signature scent.

I met my friend Lindsay during our freshman year of college, and one of the first gifts she gave me was a bottle of Anna Riva oil that she’d gotten at a pagan store in her hometown. It was called Black Cat, supposedly brought good luck, and smelled ancient and mystical, like the clove cigarettes I used to smoke. So began my obsession with fragrance oils and weird perfumes that smell like a specific thing, like the ones made by Demeter. (Rain. Orchid. Rain and Orchid together, OMG.)

One day, when Lindsay and I were scouring pagan/New Age stores for incense and Anna Riva-type oils, a crafty idea was born. There was a money-drawing oil that we both loved the scent of (and who doesn’t want to draw more money?), and it sat next to a pamphlet that disclosed and explained all the ingredients—patchouli, cedar, cinnamon, ginger, a tiger’s eye gemstone (for wealth and abundance), and some shredded U.S. currency because “it takes money to make money.”

“I bet we could make something like this ourselves,” Lindsay said, and we went home, consulted the internet and my collection of Wiccan books, and did just that. And now I’m going to tell you how to do the same! 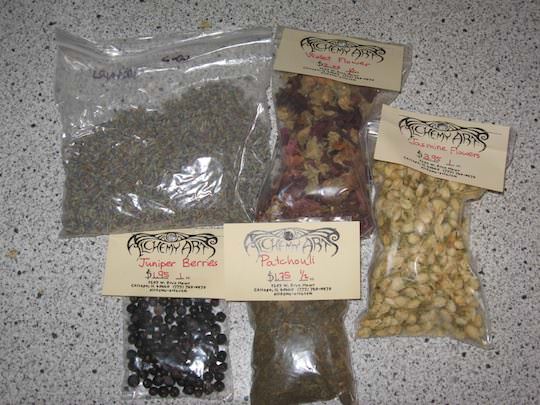 1. Pick out your herbs or other ingredients. If you are going the basic route, hit up a grocery store with a nice herb/spice section, like Whole Foods. Cloves, vanilla beans, cinnamon sticks, lavender, and orange peel are relatively easy to find, and they all smell great. Clove, cinnamon, and orange can be combined to create a perfect fall scent. Vanilla is great on its own, or combined with just about anything, and lavender is relaxing. I wear it by itself when I’m feeling stressed.

If you are interested in making oils that smell good and have properties like protection, luck, and romantic attraction, you will want to check out a book like Scott Cunningham’s Encyclopedia of Magical Herbs, or do a lot of Googling and cross-checking at pagan sites like Teen Witch to make sure you have a general consensus of what a particular plant or herb represents. If at all possible, you will want to smell things in person, though. Our greatest find was angelica root, an herb for protection, which has a gorgeous floral, vanilla scent to it, and mixes really well with just about everything. Even if you aren’t looking to make oils with specialized properties, it can be good to check out a shop with a large herb/plant selection, because that’s where you’ll be able to find things like jasmine and patchouli, which are both classic fragrances. 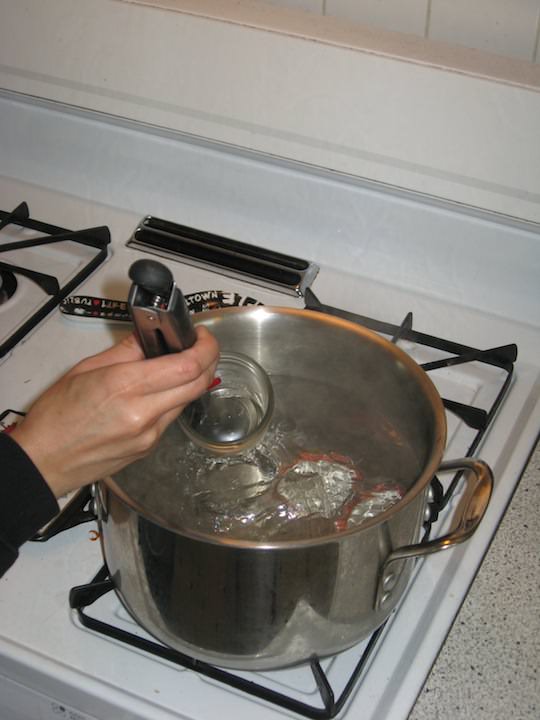 2. In a large pot, bring a lot of water to a boil—enough to submerge your jars. Immerse your glass jars and their lids in the boiling water for about five minutes to sanitize them. Use tongs to get the jars and lids in and out of the water.

3. Remove jars and let them cool. Boil the pot of water again. While it’s boiling, wash your hands thoroughly, so nothing on your fingers contaminates your jar or your oil. 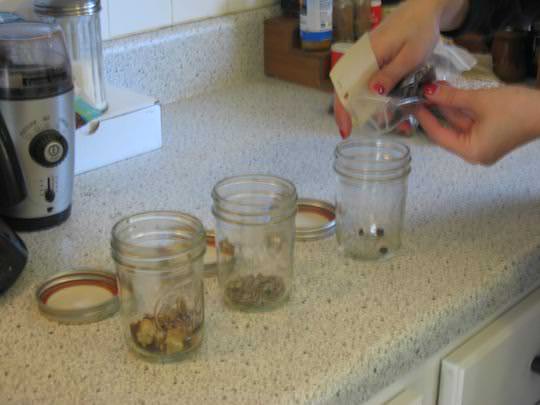 4. Once the jars are cool enough to safely touch, put your herbs in. I recommend doing one herb per jar, so you have a pure sense of each fragrance. 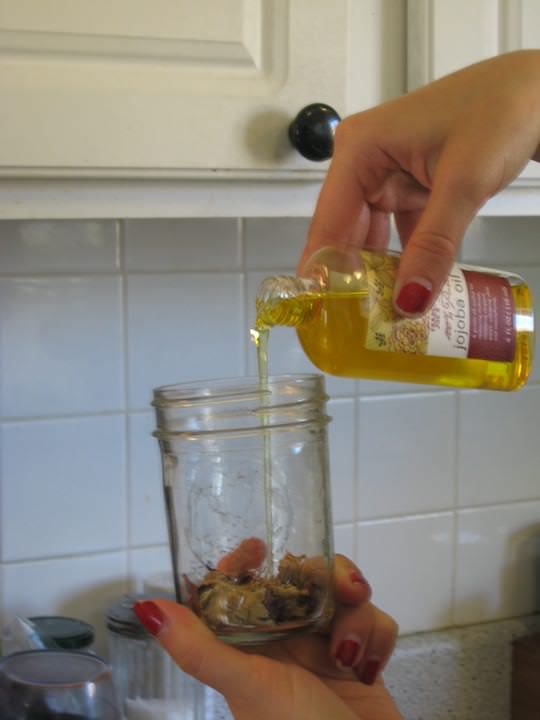 5. Cover the herb with the carrier oil. You’ll want to submerge the herbs completely, so the exact amount will vary. More-absorbent herbs might need a bit more oil. Be sure to label the jar’s lid so you won’t forget what’s in there. 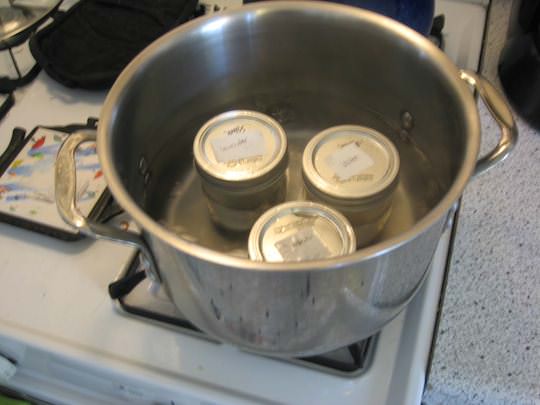 5. With the lids closed, place the jars back in boiling water for 10 minutes. Let them sit in the pan until the water cools.

6. Remove your jars from the water, and put them in a sunny space for three days. Lindsay and I did this in the summer, so we took them outside, but in other seasons, use the window that gets the most sun for the longest period of time. 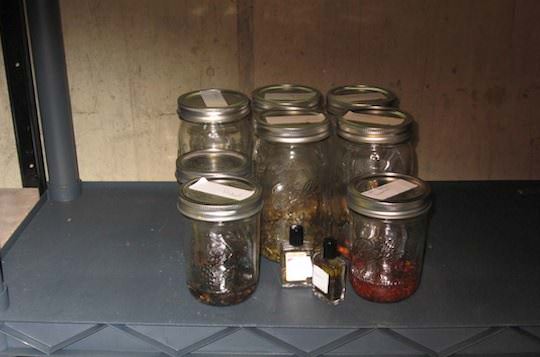 7. Store the jars somewhere cool and dark for two to three weeks. The more patient you are, the stronger the scents will be. 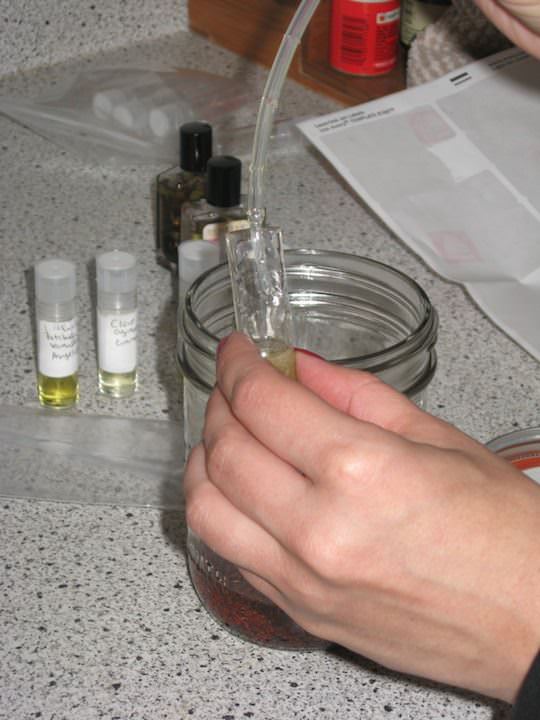 8. Bust open those jars and start sniffing! This is where you get to be a mad scientist and decide what goes with what. Using your eyedropper, extract the oils and combine them in your perfume bottle. Like that clove smell the most? Use twice as much of it as your cinnamon. I’ve combined up to six different herbs in a bottle. It’s totally up to you, because you are designing your own signature scent. You’ll want to use the dropper to stir up the oils once combined—I recommend using multiple eyedroppers, but if you have only one, rinse thoroughly between extractions.

Now, if you are super picky about not having herbal bits in your fragrance oils, you can use a cheesecloth to strain out the herbs. (Put the cheesecloth over the mouth of the jar and pour the oil into another jar.) Personally, I leave the herbs in, because I don’t use all of the oil in the mixing phase, and I keep the leftovers in my basement to get even stronger-smelling.

You can add gemstones and crystals for magical properties, or just to pretty up your bottle. Unless you are using large bottles, you’ll have to find gemstone chips, which might be available at your local New Age store, or an online bead store like this one. 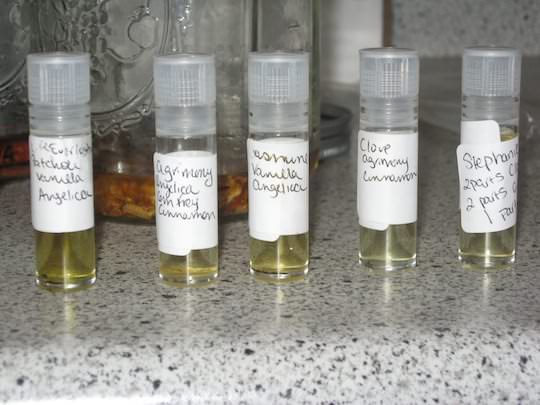 10. Label your bottles. You might want to take notes to remind you what each scent smells like. Feel free to give them cool names, too. After reading online that myrrh, cardamom, and cinnamon were herbs that the ancient Egyptians used in their musks, we combined those and called the resulting fragrance (drumroll please) Ancient Egypt. (I know you can do better.)

You should know that your oil is not going to be as strong or long-lasting as a store-bought perfume, but it’s yours and yours alone, so wear it with pride! ♦