Work Hard and Be Kind: An Interview With Chris Ware

We talk to the cartoonist about substance abuse, storytelling, and the reality of dreams. 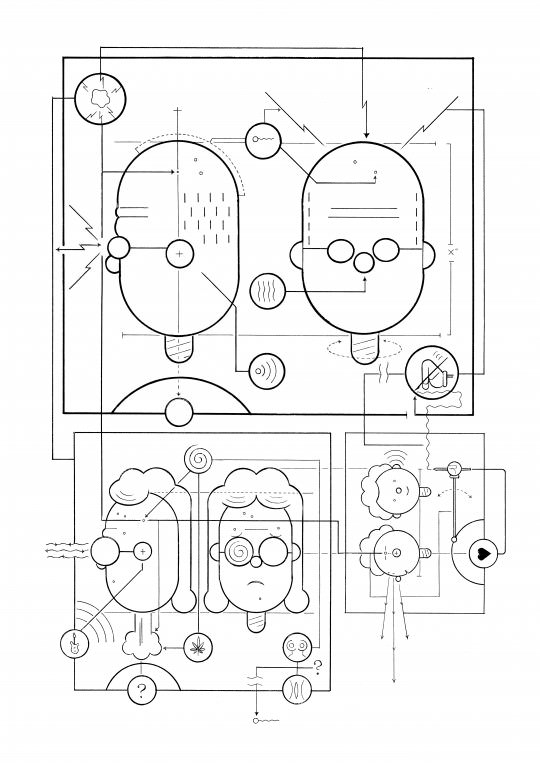 Self-portrait by Chris Ware, including his teenage, “version 2.0 ‘stoner’ self.”

Thanks to this wonderful piece a reader sent us that went up just the other day, I don’t really need to tell you who Chris Ware is. I will say, however, that if I could ask all humans to read just one thing, it would be any of his books. They’re not quite comic books or graphic novels; he’s almost created his own medium. Sometimes his books have pages of satirical advertisements drawn by him. Sometimes there’s no dialogue throughout an entire spread. Some panels look like complicated mazes but flow like streams of consciousness. The same characters pop up in different stories, the most overlooked details of everyday life get the most attention, and I always come away from it all feeling more connected to any person I may pass on the street and with a strong desire to create something of my own. That is, I believe, the best a person taking in a thing another person made can hope for.

Chris very generously answered, over email, my questions about his new book, being a teenager, and the reality of dreams.

CHRIS WARE: That’s a complicated question, since I think I mutated every three months or so, but a general string of adjectives might be: insufferable, desperate, scrawny, bad-skinned, triangulating, self-doubting, self-conscious, crude, and unappealing. I spent a lot of time watching television and following a program of musical taste that one of my friends unintentionally curated for me (i.e., I copied everything he liked), and I tried to make my naturally buoyant hair look longer by straightening it with a hairdryer. I attended private school until 10th grade in Omaha, Nebraska, where I wore a “formal uniform” which I modified to express my true self via footwear or digital watches that weren’t officially sanctioned by the Episcopalians. I was terminally unathletic and terrified at the thought that I might one day have to remove my shirt in public. To make up for this perceived deficiency, I stupidly got into various experimental substances, a period which ended in a moment of self-realization after buying said substances while driving my grandmother’s Oldsmobile Toronado—probably the dumbest, most shameful moment of my life—when I found myself thinking, What if I’d gotten arrested? What would that have said about me, about her, and about my mother, who tried to raise me right? Fortunately, I abandoned that particular path of inquiry.

What were your biggest influences at that time?

Because of this brief substances-experimenting I became “interested” in the idea of the 1960s (or whatever “the idea of the 1960s” meant to a Midwestern middle-class kid in the 1980s) and ended up buying a lot of so-called underground comics at head shops and out of the back room of the local comic book store from which I’d bought superhero comics as a middle-schooler. It was there, while hoping to find pornography, that I discovered RAW magazine, Robert Crumb, and Harvey Pekar, and somehow through the example of these and other artists like Gary Panter and Charles Burns came to the conclusion that the only thing I had any remote proclivity for—drawing—might possibly be employed in creating comics, which to me seemed like an untapped, slightly edgy world of expressive possibility and genuine honesty, and maybe even a way of meeting girls. (It wasn’t.) In the 1980s, popular culture was so mired in falseness and compromise that comics seemed (and still seem to me, actually) an unpretentious potential vessel for solitary authenticity. It was Robert Crumb who amazed me first artistically, Harvey Pekar who made me realize that regular life itself could be written about, and Art Spiegelman who provided the first (and still the finest) example of how it all might be synthesized into a thoughtful, readable artistic medium.

When I saw you speak last month at Unity Temple in Oak Park, someone asked you what the ACT of drawing FEELS like, and you said it was just horrible. I also read somewhere that you can’t look at any of your books because you’d notice only what’s wrong with them. There’s a page in The Acme Novelty Library with tips about being a cartoonist that make it sound miserable. If neither the process nor the product are satisfying to you, what drives you?

I don’t know. I guess I’m motivated by actually finishing something—something that I know I’ve tried my absolute hardest at and have put every bit of myself into—while the tolerability of the actual creative experience remains a distant concern. There are also those rare moments while writing and drawing where something comes up completely unexpectedly on the page—like a gesture or a facial expression on a character—which suddenly reveals something about the story or the person I simply never would have thought of just sitting around thinking. In the best of these instances, I might also realize I’ve been lying to myself about some part of my own personality for years, and that consequently there’s something I need to change.

What advice would you give to someone who is in the early stages of that and possibly struggling?

To work as hard as possible, and then, when you think you’re done, to work just a little bit harder. To know that if it feels “right” it may actually be completely wrong, and that if it feels “wrong” it may be completely right. There’s no governing principle to any of this except that strange instinct and feeling within yourself that you simply have to learn to trust, but which is always unreliably changing. To create something for people who have not been born yet. To pay attention to how it actually feels to be alive, to the lies you tell yourself and others. Not to overreach—but also not to get too comfortable with your own work. To avoid giving in to either self-doubt or self-confidence, depending on your leaning, and especially to resist giving over your opinion of yourself to others—which means not to seek fame or recognition, which can restrain rather than open your possibility for artistic development. With all this in mind, not to expect anything and to be grateful for any true, non-exploitative opportunity that presents itself, however modest. And to understand that being able to say “I don’t know what to do with my life” is an incredible privilege that 99% of the rest of the world will never enjoy.