A Very Very Basic Guide to Taking a Better Photo

Tips & tricks stolen from the pros. 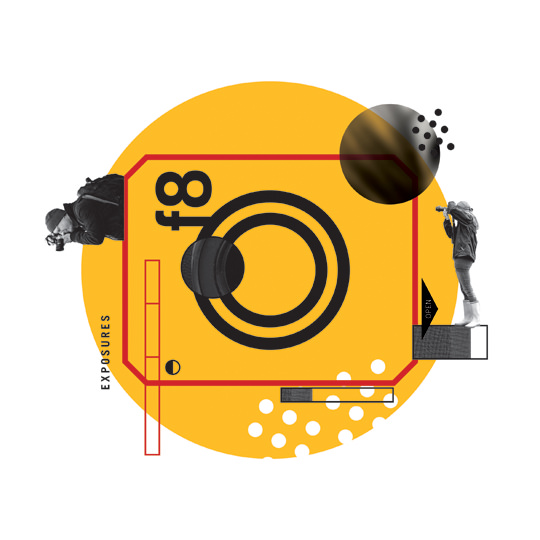 Under pretty much every Eye Candy post here on Rookie you will find at least one commenter asking, “HOW DID YOU TAKE THESE PICTURES WHY CAN’T I HAVE YOUR SKILLLLLLZ?” Now, it’s true that all of our photographers have mountains of skillllllz—and were probably born with a gift for expressing themselves visually—but they too had to learn the basics before they could take great pictures.

Another question we get on a lot of our photography posts is “What camera did you use?” Unless you’re doing 3D photos like these, getting a specific make or model of camera isn’t as important as you might think. Neither is having a really expensive camera—a fancy machine isn’t better at teaching you how to be a good photographer, and you’d be surprised to learn how many professionals use cheap ones.

For example: Petra uses a Canon AE-1, which you can find for under $100 on eBay, Craigslist, or a used-camera store, on all her shoots, and gets the film developed at the drugstore. Eleanor often uses a disposable camera, a cheap old film camera called the Yashica T3, or a 35-millimeter analog SLR (the Canon EOS 300) that can be had for about $25 on eBay. A ton of Tara’s work is done with cheap cameras: these two were taken with the webcam on her HP laptop; this one was taken with a disposable camera; this with a waterproof disposable. Also, she says, “all my photography pre-October 2009 was shot with a cheap point-and-shoot.” Lauren Poor used a disposable camera for this shoot; for this one she used “the cheapest digital point-and-shoot [she] could find,” took videos of her friends, then took screenshots of those videos. “The tools you use are important when they’re used thoughtfully and for specific purposes,” Lauren says, “rather than mindlessly selecting the most expensive camera.”

Whatever camera you’re using, take some time to get to know it. Become friends with it. Just like friends, every camera is different, and each one has its own habits and quirks. Learn what all the parts of your camera can do.

But some of the most basic things you can do to take better photos apply to all cameras, always. Here are a few of those, to get you started.

(A huge caveat: Obviously, rules are made to be broken. But you’ll be better at breaking rules in interesting ways if you know what those rules are in the first place, and why they exist.) 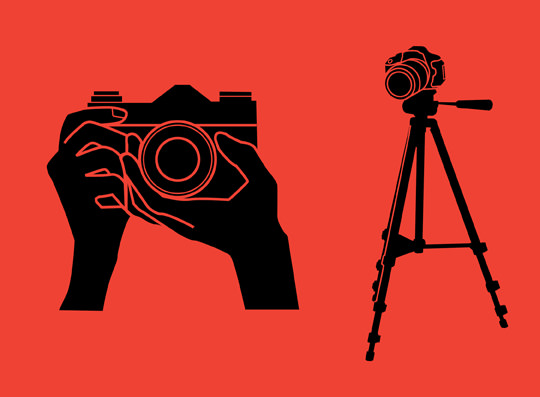 One of the most common problems that beginning photographers encounter when they’re using a hand-held camera is “camera shake,” which results in slightly blurry pictures. A good way to avoid this is to place one hand under the camera, and brace that arm’s elbow against your ribs. This will give you more stability. You could also kneel on one knee, with the other knee forward so you can rest your camera-supporting arm on it, or lean against a wall or something for extra support.

Apart from your own body parts, the most common form of camera support is a tripod. Using a tripod is a sure way to achieve a sharper image, and will give you room to concentrate more on light and composition. Tripods are best for situations where you know you’re going to be in the same position for a long period of time—say, when taking portraits or still lifes. They’re also good for taking photos in low light, because you can slow down your shutter speed (to give the photo a longer exposure, or more time for the inkling of light to have an effect on your film or your digital camera’s image sensor). When you’re shopping for a tripod, look for one that’s sturdy, with extendable legs that can easily be raised and lowered. Look around on Craiglist and eBay or at your local used-camera store for deals. Sometimes a good one will show up at the thrift store, so keep an eye out there too.

One of the most important things you can do to improve your photography is to learn to see like your camera. Maybe you’ve noticed that some of your photos don’t draw a viewer’s attention to the thing you wanted to spotlight, or don’t capture what looked super compelling to you in person, or just aren’t that fun to look at. There are a lot of possible reasons for these problems, but a big one is composition—literally where all of your image’s elements are within the frame, and in relation to one another.

In a well-composed photo, all the elements of composition—color, line, tone, pattern, space, and perspective—are working together to make the image compelling. If you train yourself to visualize a photo’s composition before you press the shutter, you’ll be able to say more with your photographs. Take note of what’s in the foreground and the background, and how things look from different angles. Notice details. Notice shadows.

Henri Cartier-Bresson, who basically invented modern photojournalism, was a master of composition. He captured thousands of spontaneous moments that looked too perfect to be real by recognizing what he called the “decisive moment,” which has everything to do with being at the right place at the right time. Some examples: 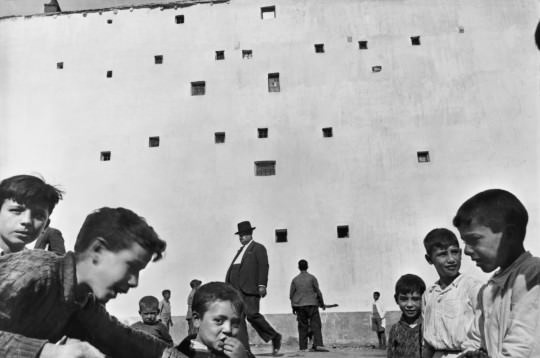 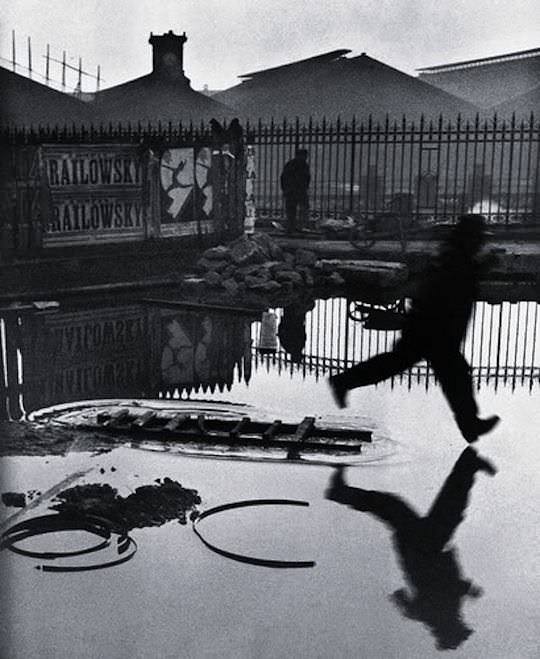 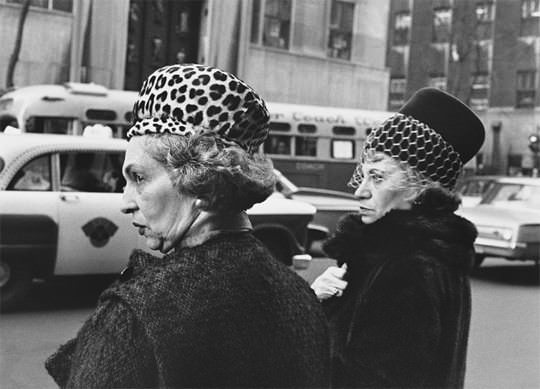 Cartier-Bresson was known to stake out a location and wait patiently, like a hunter, until flawless composition appeared naturally before his eyes, in order to capture the perfect image.

To incorporate Cartier-Bresson’s method in your own practice, be alert to your surroundings, keeping a keen eye out for those “decisive” moments.

3a. The Rule of Thirds

An easy way to achieve good composition is to use what many artists call the “rule of thirds.” This divides the frame area into nine segments, like so: 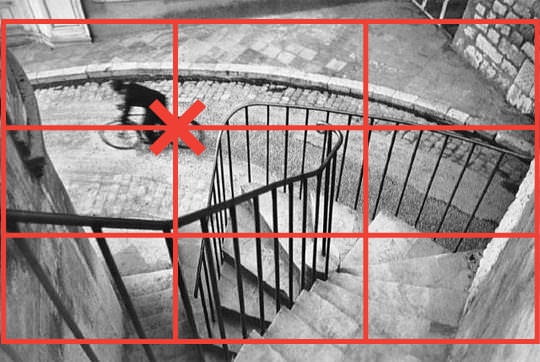 You place the main thing you want people to look at (in the case of the Cartier-Bresson photo above, the boy on the bike) on one of the four points where the lines intersect. Now, you might assume that if you want someone to look at something you should place it dead center—but for some magical reason, people’s eyes seem to be drawn to those four points, and the other three-quarters of the image counterbalance that point nicely. Look at that photo without the grid, and imagine how different it would look if the boy on the bike were in the center: 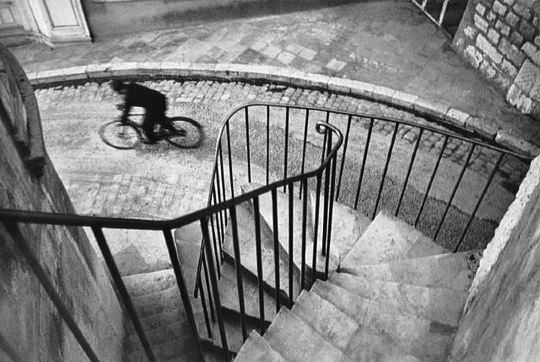 If those points are empty, your photo may lack focus. If you center your subject, your image might feel a little boring or static.

If you are photographing something with a really defined horizontal line, such as the horizon on a landscape, try placing that line in one of the “thirds” instead of in the middle of the frame. The image might be more interesting that way: 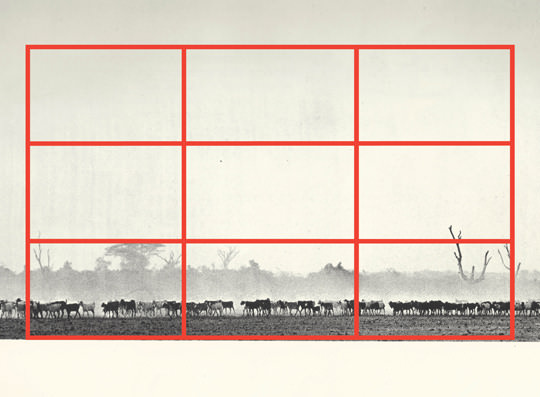 The rule of thirds isn’t a steadfast commandment (none of the things I’m saying here is!). Study the way photos and paintings that you like are composed, to get an idea of what works.