There’s a difference between humor and bullying. It just took me a while to realize it. 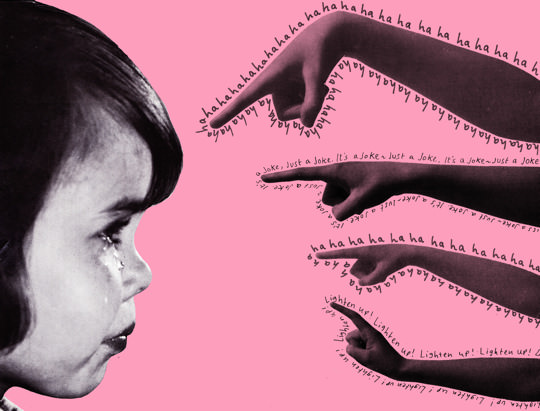 In fifth grade there was this girl, Paulette,* who was short and round, like a kickball, and really blonde and pale—practically albino. Like me, she was quiet, unathletic, and at the mercy of Liza, Brooke, and Cassie, the most popular girls at our suburban school. Sometimes during recess, they made Paulette run around the baseball diamond that was painted on our asphalt playground.

“Go, Paulette, go!” they mock-cheered, struggling to breathe because they were laughing so hard.

Paulette was struggling to breathe, too. And there were tears in her eyes, but she kept running for as long as they told her to. When they let her stop, she forced herself to laugh with them. With us. Because I laughed, even though I knew it wasn’t funny.

In junior high, I realized these jokes were really just bullying, and I stopped tolerating Liza, Brooke, and Cassie. But during sophomore year, when I started dating Greg, “joking” got confusing again.

By then I’d developed a dark, sarcastic sense of humor—very Winona Ryder in Heathers. Sometimes you have to poke fun at the fucked-up things in the world—including the reasons people are mean to one another in the first place—or you just get depressed. It was a coping mechanism, and one of my only healthy ones.

I hung out with a crowd that had a similar sense of humor, and we pulled a lot of pranks—mostly doing harmless stuff to one another. Like this one time during Christmas, when people were decorating their walkways with those little paper bags with candles inside. We swiped a bunch (OK, so this wasn’t a totally victimless crime) and piled them on top of another friend’s car. This guy was annoyed, and not at all amused, but he generally took things too seriously. We all thought he was someone who needed to “lighten up” anyway.

Greg and I started going out not long after that. Then I became the person who was told she needed to “lighten up.” Greg would say those words to me a lot.

The first time was about three weeks into our already intense relationship. He’d dated my friend Acacia before he was with me, and she’d left this stuffed animal, a pink duck, at his house. She asked me to ask him to give it back, and when he brought it to school, it was horribly vandalized. He’d burned off its fur in some places and had written all over it in Sharpie. Things like “Skunkhead,” which poked fun at Acacia for having recently bleached half of her naturally black hair blonde.

“It’s a joke, and she actually deserves it for copying you,” he said (I’d dyed a blonde streak in my hair three months earlier). Then he made me give the duck to her, laughing as he watched the expressions on our faces—hers sorrowful, and mine apologetic and fearful. “God, you need to lighten up!” he insisted when I walked back to him with my chin quivering, about to cry.

He said it again a couple of months later. Greg and I were walking down a busy street when two frat-boy types pulled up in a convertible and started hollering at me, “HEY, BAYYY-BEEE!” I attempted to kick their car as they drove off. I expected Greg to do the same thing. Instead, he threw me over his shoulder and intentionally flipped up my skirt, flashing my panties to them—and the entire block.

When he put me down, I had tears in my eyes. “Why the hell did you do that?” I yelped.

“Because it was funny. Lighten up.”

So I laughed like Paulette did when Liza, Brooke, and Cassie harassed her in grade school. Like I used to do. I laughed because I felt so sick inside that if I didn’t, I might have thrown up instead.

Over the course of our six-month relationship, there were a lot of these kinds of “jokes.” Things that were supposed to be funny made me feel totally horrible about myself. I made excuses for him—he’s insecure or doing it to cope—but eventually the ribbing got to me. And every time I got upset when he was “kidding around”—whether he was exposing my underwear to strangers or making fun of my diary after begging to read it—Greg said I was overreacting. I was crazy, or something was wrong with my sense of humor.

I’d swallow back tears, thinking—fearing—he was right. As far back as first grade, my teachers told my parents how “sensitive” I could be, and I’d been struggling with depression since junior high. Maybe there really was something wrong with me.

At the end of sophomore year, after Greg and I broke up, I began to understand that his jokes really weren’t funny. In fact, just like the many other mind games he played—like trying to control whom I hung out with and what I wore—they were abusive.

Around this time, I officially lost my sense of humor. I even started to hate the word funny. In a zine I published junior year about that relationship, I wrote about how an acquaintance, Ray, told me he thought it was “funny” that Greg—the person I then hated most—was someone I used to loved very much. I wrote that I’d told Ray it wasn’t funny at all—I hated Greg because he hurt me. Then I wrote in big, bold letters: “I’M STARTING TO THINK THE WORD ‘FUNNY’ IS MISUSED.”

Sometimes it is. Sometimes we use “funny” in place of “fucked up.” Sometimes we tease other people to compensate for our own insecurities—like Liza, Brooke, and Cassie seemed to do in grade school—and sometimes we make fun of ourselves for the same reason. Sometimes we push it too far—like Greg did—and it becomes abuse or bullying.

There also are times we laugh because we’re trying not to cry. We’re afraid we’ll be the butt of the next “joke” if we don’t, or we feel humiliated or scared. If you completely refuse to let yourself laugh at anything, though, you can fall into a debilitating depression or spiral out of control trying to have “fun” in other ways.

I had to learn about humor all over again. I watched comedies I’d always loved, like The Simpsons. I hung out with my delightfully immature friends Jack and Rob. Sometimes they made fun of things I cared about—like being vegan—and sometimes I flipped out. The difference was they never got mad or defensive about it like Greg had.

Gradually, I learned to assess when I was being super sensitive versus when people were being mean (and when it was a combination of the two). I found that, as with most things in life, the best way to judge whether something is or isn’t funny is by the feeling in your gut. I had forced myself to laugh at things that had not actually been funny when, deep down, I’d known it.

We’d been broken up for about nine months when I heard that Greg had pantsed a kid—completely yanked down his jeans—on a busy street corner. I decided to stand up to him in a way that I was never brave enough to before. I wrote him a letter calling out his messed-up, unfunny behavior. After reading it, he called me to defend himself—and once again he repeatedly insisted I just couldn’t take a joke. “The rest of the world,” he informed me, found things like pantsings and humiliating other people to be “hilarious.”

This time, I didn’t back down like I did when we were dating. I knew what was hurtful, and even if he wasn’t going to acknowledge it, I was. It was hard, not to mention frustrating, but confronting Greg with that letter—and making the zine—really helped me figure out where his “jokes” crossed the line. Once I acknowledged what wasn’t funny—and, even more important, that I wasn’t “crazy”—I started to reclaim my sense of humor.

I also eventually realized, through friends like Jack and Rob, that there were times I had to laugh at myself. Now I can look back and giggle at my freshman-year poetry. Or when I first went vegan and got really preachy. Living with ridicule isn’t fun, but neither is taking yourself too seriously. Figuring out what I was comfortable with laughing about made my instincts for what wasn’t funny even clearer. Slowly but surely, I taught myself to laugh again. ♦

* All names have been changed.