That’s right, we love ORGANIZED SPORTS. What, we can’t have layers? 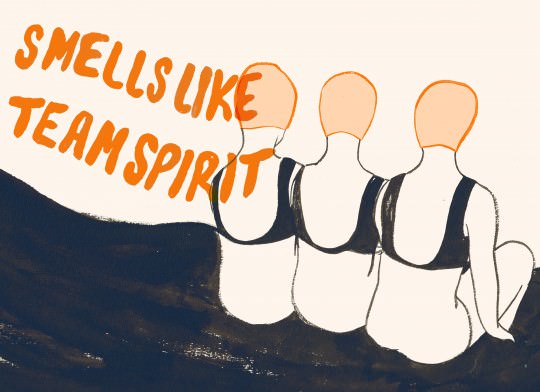 One of the greatest parts of any Olympics—and London 2012 certainly was no exception—is the Opening Ceremony, where athletes from all over the world march into the stadium together, waving flags from their respective countries and soaking in what must feel like the love and admiration of the entire planet. For a brief time, it feels like everyone is connected through the spirit of sportsmanship and peace, and though most of the athletes walking through the stadium are aware that they have little to no chance of taking home a medal, they’re simply honored and thrilled to be there.

At home, those of us who also have a vanishingly small chance of medaling watch as the athletes enter the stadium; we get excited whenever our favorites hit the stage, waving hands and flags and representing the athletic dreams of the rest of us. We love them and support them because they’re “our team.” When they excel, we celebrate. When they lose, we mourn with them. And when they take home the gold medal, we say things like, “Did you hear? WE won the gold!” Being a fan of the Olympics, whether people realize it or not, is an exaggerated version of how it feels to be an actual team member. You don’t have to be the star athlete to gain something positive from the experience.

Some of my best high school memories come from my time as a member of the swim and softball teams, and not just because our swim coach brought doughnuts to Saturday practices. Organized sports can introduce a great deal of goodness into your life, perhaps in ways you’ve never even considered. So consider these, won’t you?

Though high school isn’t the clique-driven nightmare that Hollywood films like to say it is (it’s still 1987 in many onscreen schools, apparently), basic logistics make it difficult to know everyone that you share the halls with. Sports are a great way to meet new people—people you might not have classes with, or people in different grades, or people you’ve just never had a chance to hang out with, for whatever reason. A team spends a decent amount of time together, between practices, games, bus rides (to and from away games), and fun stuff like pre-game dinners, fundraisers, and post-game ice cream runs, so there will be plenty of opportunities to interact with everyone. You may be surprised by what you learn about your teammates—preconceived notions based on shallow judgments made in the hallways can flip as soon as you start getting to know someone.

You and your teammates are bound by one common goal, which makes the process of getting to know everyone a little easier—even if there are clashing personalities on the team (and there are always a few). When it comes down to it, you’re all trying to beat the other team, and the bonding that comes along with that shared objective has a way of overcoming social hierarchies. And if you find after playing for a while that you genuinely don’t like anyone on the team, and that the experience is kind of a bummer? You can quit! It’s that easy. But don’t give up on the idea entirely, OK? There’s another sport, and another crew, out there waiting for you, I promise.

Realizing You Are More Bad-Ass Than You Previously Thought

99% of the universe sucks at everything until they start practicing. I’m sure Michael Phelps was doing expert kick turns in his mother’s womb, but the rest of us are mortals and were not blessed by Poseidon or whatever. The trick is to remember that it’s a game, and games are supposed to be fun. (Think of Coach Bombay in The Mighty Ducks yelling, “More fun! More fun!”)

It also helps to stop comparing yourself with your teammates and focus on your personal goals. That way, you can cheer on your teammate Suzy Full-Scholarship as she kicks serious ass in the pool, and your teammates will do the same for you, even if you come in last place, so long as you’re putting forth your best effort. Maybe you want to take a few seconds off your best time by the end of the season, or maybe you want to score at least one goal, or improve your passing skills, or your technique, or your stamina. And at the end of the season, you can look back and think, Hey! I did that! which is pretty great. Pushing yourself to the limit, knowing that you put in all you could (and having the results to prove it) is a confidence builder that is hard to deny. The only competition you really have out there is yourself—and no trophy in the world feels as good as knowing that you beat your own self-doubt and inhibitions.

Yeah, this is totally shallow, but I mean. You could go out and snag a fake varsity jacket, sure. But the real deal, with your name embroidered on the front, Pink Ladies style? Even better.

If you have a tendency (like I do) to waste a lot of time, sports are an excellent way to keep your days (and your life) structured. Practices and games/meets/matches are always on a set schedule, so you’ll need to adjust your body, and your life, to meet the needs of the team. That might sound horrendous, but it’s actually a bit of a blessing, because it forces you to fight procrastination and prioritize. The discipline, drive, and focus that team sports offer can be applied to every aspect of your life: you need to be on time, you need to try hard, and you need take care of yourself so that you’ll always do your best. And since you need to keep your grades up in order to participate, you can’t slack off on your homework, either, which pushes you to continue working hard and putting in the necessary effort. It’s great practice for post–high school life, whether you’re going to college, entering the work force, or both, because it teaches you how you use your time wisely and to work around a schedule a productive way.

Swimming was therapeutic for me—even as my muscles became sore during practice and I swore that my skin was about to turn Kryptonite green from the chlorine. There’s something freeing about being in the water, and I used my practice sessions to physically work out some of the anxiety that I’d been carrying around throughout the day. The endorphin rush that comes with a great workout can be a massive help when you’re dealing with less-than-stellar moods; and because I was doing something I loved, it made exercise (which I usually find super boring) a great release. There were plenty of girls on my team who knew that they’d never win a race, but they came to practice every day anyway, because they felt good doing it and took something positive away from it. It’s not about losing weight or getting ripped or any of those nonsense things that people try to sell exercise with; it’s about connecting with your body and your brain and ultimately feeling more comfortable with—and proud of—yourself as a result.

Beyond all else, being on a team can be super fun. My friend and I used to spend hours during softball games making up dumb cheers (one of them started off being something about bats, and ended up as a song about lactose intolerance—so, you never know), and our team racked up about 8,000 personal jokes before the season ended. We sang songs on the bus, had poster-painting parties, wore matching (ridiculous) outfits for spirit days, broke into hysterical laughter at nearly every team dinner, and developed a kind of sisterhood that lasted, even after the season had ended. A team can be a family (complete with certain members who fight—it happens), and the bond you make sticks with you. And if you’re a swimmer, you automatically have at least 15 girls in the school who understand why you smell like a chemistry experiment at all times. That’s love.

Finding Your Own Thing

Depending on the size of your school vs. the number of people they can allow on a team roster, it may be hard to actually make a high school squad. That doesn’t mean that you have to give up on the idea of joining a team. There are intramural or city teams that are always looking for members: kickball, dodgeball, and Ultimate Frisbee, to name a few.

You can also start your own squad; when I was in high school, a dance team, a capoeira crew, and a step team all started up, and since I’ve graduated, one of my alma maters has become a proud member of the International Quiddich Association. If you can’t find the team you’re looking for, create it! You just might be opening a door that many fellow students were looking for, and you’ll meet people who share your passion, as well as leave a legacy for those who follow in your footsteps. Who knows? You might discover that you’re a world-class Quiddich player, and you can say you were there at the beginning, when Team USA, brooms in hand, enters the arena at the Opening Ceremonies. ♦