Hazel
Lena Dunham read some pages from her “Millennium Book” at the Rookie Yearbook One reading last month at McNally Jackson and they were, of course, hilarious. The whole document, which is basically a long-form questionnaire about life on the cusp of the millennium, was just published on the blog for the movie Teenage. My favorite is her answer to the question “What new invention would make your life easier in the new Millennium?” Her response: “A shower where you can lie down and sleep while your hair is washed for you. Also a dream recorder so you could watch your dreams on tape.”

Full disclosure: I was part of the bunch who pulled this PSA together, but obviously it is with thanks to many submissions by many people that the end product is, AT THE VERY LEAST, a strong display of karaoke dedication.

John Francis Daley has appeared in Bones, Freaks and Geeks, and, most famously, a Rookie Q&A this past summer. He’s also now appeared in this music video he co-directed of his band, Dayplayer, and it’s delightful and strange and has babies and gold spandex (but not babies IN gold spandex).

Anaheed
This week Vagenda Magazine published an article, republished on The New Statesman, defending the writer Caitlin Moran (whose book, admittedly, I haven’t read, but which was included in our list of Beginnings books). The article basically argues that it’s all right to ignore “issues of race, class, religion, sexuality, politics, and privilege” when you’re trying to appeal to a “mainstream” audience. This response, by the blogger stavvers, is the best introduction to the idea of intersectional feminism—which recognizes racial, ethnic, sexual, class, and other injustices as well as those based on gender—that I’ve ever read.

What, you haven’t gotten enough baby animals from us yet? Let’s fix that with this trifecta: baby kangaroo, wombat, and wallaby. Three orphaned marsupials, all best friends. Awwww. 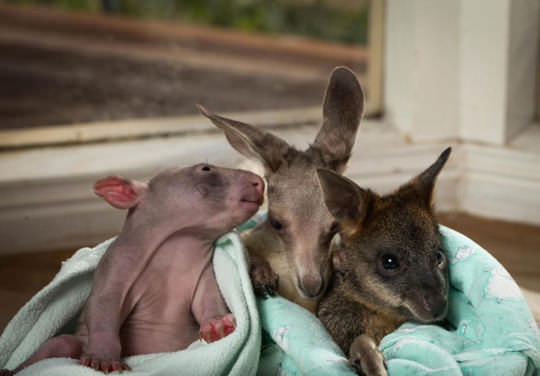 If you haven’t passed out from cute overload, take a look at this:

It’s a baby echidna, also called a puggle, lapping milk out of a zookeeper’s hand and LIVING IN A BOX! Australia, why are you SO ADORABLE?

Rose
OK, scientists have known for a while that birds are descended from DINOSAURS. But this week the journal Science announced that they had found proof that the first dinosaurs to have feathery wings didn’t use them for flying. Instead, researchers hypothesize, plumage evolved in order to help attract mates. As the Ornithomimus sexually matured, its downy fluff transformed into long, luxurious quills. So it follows that there would be a reproductive function to all that fancy. Now we know dinosaurs liked pretty things, too.

Gabrielle
Have you ever been so excited to bite into a piece of gooey, freshly delivered pizza only to end up burning your the roof of mouth? And then your mouth hurts for a couple of days, totally inhibiting your ability to enjoy more pizza?! Well those days are over, my eager eating friends, because apparently some guy has invented dissolvable mouth strips to soothe the pain from hot molten cheese. I don’t really keep up with medical news, but my dad recommended this to me because he knows that we Rookies take our pizza-eating pursuits seriously.

I usually feel like we (as a culture) toss the term brave around too much, and as a result it’s hard to see when things are truly brave. This speech by Lana Wachowski (co-director, with her brother, of The Matrix movies, V for Vendetta and the upcoming Cloud Atlas) about coming out as a transgender woman is fun, heartbreaking, uplifting, and BRAVE. She talks about feeling out of place at school, how her struggle led her to a suicide attempt, and the effect of having a supportive family, and it’s all intertwined with beautiful stories about her partner, her creativity, and how much she acknowledges the importance of telling her story in order to be the hope for others who may feel the same way. If your heart is made of blood and muscle you’re going to cry, but I swear you’ll also be cheering throughout.

Emma
I loved this piece in the New York Times about a painting of Picasso’s. He painted Ironing Woman on a canvas he’d already used, and the Guggenheim Museum recently cleaned and restored the work, and so now we’re able to see BOTH of Picasso’s paintings, one on top of the other. The Times gets major points from me for this interactive feature, which makes you feel like you’re erasing a 100-year-old work of art. ♦