Sometimes you just need to surround yourself with big cats.

Commercials for feminine hygiene products are ridiculous, with their blue liquids and white pants and twirling women. But when one man pointed this out on Bodyform’s Facebook page, the British company responded with THE BEST VIDEO OF THE WEEK. Thumbs up to them, for realizing that they are ridiculous, and then rolling with it.

A lot of people view modest clothing like the hijab as a form of oppression. I absolutely love this alternate view from a Muslim woman, who says that, when worn by choice, the hijab can be a way to step outside of our appearance-based culture and communicate “that a woman is more than her looks and body.”

How do you get a baby elephant out of a well? With a rope and a Land Rover! This rescue, and the ultimate reunion between Mom and baby, is sure to be the most heartwarming thing you’ve seen all day.

Anna
Mahtab Laghaei wrote a rant about shows that are 19+ (the equivalent of 21+ for you Americans reading this) at Other Zine. She includes a list of really clever tips for seeing the band anyway.

Ohio University’s Students Teaching About Racism in Society (STARS) is relaunching its simple but powerful “We’re a Culture, Not a Costume” poster campaign in time for Halloween. There exist so many good costume ideas that don’t rip off people’s cultures.

Caitlin
I’m clutching at any little bit of Tim Burton news, so I was excited to see this article, which is just more proof of just how brilliant he is. “I think a lot of kids feel like they’re just sort of loners, but you also get along, you go to school. In fact, I always felt like the other kids were much stranger than I was.” Has he been reading my journal? And while neither Johnny Depp nor Helena Bonham Carter are involved with the character voicing in this movie (SHOCK, HORROR!), Burton has brought back WINONA!! I can’t wait to watch Frankenweenie now.

Tavi
This tumblr started in August, but got a second life making rounds online this week, also I am behind on everything, so I BRING YOU: Kanye Wes. That is, Kanye West lyrics set to Wes Anderson stills. It combines two major interests of mine and maybe yours too. Fantastic Mr. Fox toasting to the douchebags is really all I’ve ever wanted. 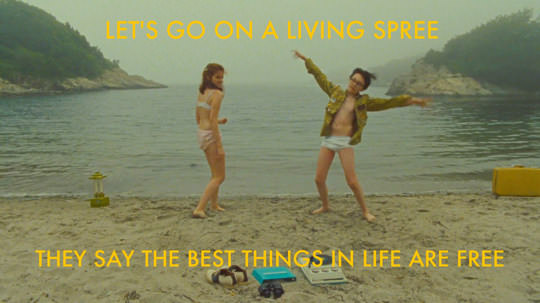 Sady
By now you probably know about Mitt Romney’s super-weird “binders full of women” story in the debates. You probably even know about bindersfullofwomen.tumblr.com. But I would like to highlight something even more special: the few, brave souls who are entering binder reviews on Staples and other office-supply sites, ranking binders in terms of how well you can stuff them full of women. 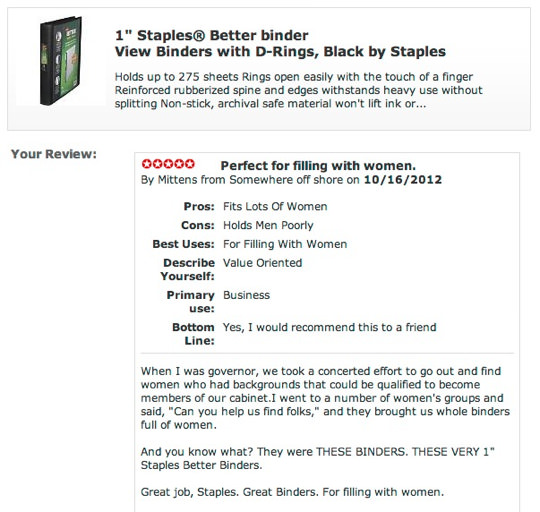 This is an example. But how well do YOUR binders contain all your many women? I think the fine people of Amazon and Staples Dot Com would like to know!

Rose
I love this examination of Tippi Hedren’s lifelong association with predatory cats. The actress and activist has been in the news lately because a movie based on her abusive relationship with director Alfred Hitchcock comes out this weekend. The essay draws out the parallels between Hedren’s professional life and her personal devotion to lions and tigers (but not bears): “A lion’s displays of covetousness, Hedren notes, can occur over the most random items—backpacks, trees—but also over people. When a lion is being possessive over a person, it won’t allow anyone else near. Nor will it let the person go.” Woah.

Anaheed
Remember the baby walrus that Sady linked to last weekend? The New York Times is soliciting children’s drawings of Mitik, that 240-pound bowl of adorable, on their City Room blog. It’s part of their series called Kids Draw the News, which I didn’t know about till now, and which is frustratingly hard to navigate, but is still so so cute.

Sarah Silverman’s dad is giving Arabelle’s dad a run for his money in the Best Dad category at the Parenting Awards.

Jenny
Snarky gossip website-type stuff SUCKS, but Kristen Wiig is GREAT. I talk about pooping, or the troubling lack thereof constantly. Kristen—if you are reading this and are in need of a POOP CONFIDANTE, at least consider me?

Happy October 19th-ish? This message comes to you a day late, yeah, but October 19th is a state of mind!

I love Grimes. Her description in this piece, of her research process as “an overwhelming craft,” was so great.

And finally, because there’s no such thing as too many links about baby animals, here’s Moses, an orphaned baby elephant. Your weekend internet activity will be NOTHING without the addition of this ridiculously cute pachyderm. Prepare for a melty heart. ♦