On the Outside Looking Out

Being unpopular wasn’t enough to make me cool.

Reconciling Something We Shouldn't Have to Reconcile in the First Place 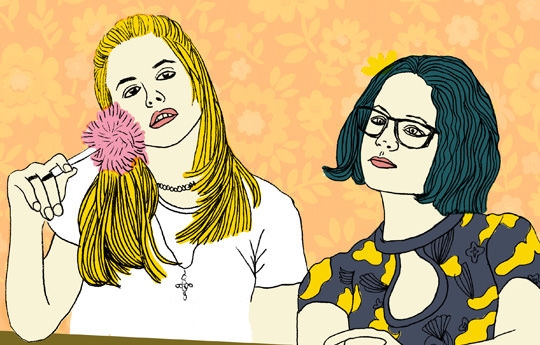 I did my most serious studying in high school in the weeks before my freshman year had even begun. The morning after Labor Day, my bedroom floor was littered with the most recent issues of every teen magazine imaginable. I had mined them for tips on the clothes I was supposed to wear (miniskirts, Uggs) and the music I was supposed to listen to (Justin Timberlake). They promised me that all I had to do was consume the right products, and I would fit in. Hell, if I played my cards right, I could even be popular.

For middle school I went to a super academic school in Ottawa. I spent every spare minute doing a lot of homework. There was very little time left for socializing, so I didn’t. As a result, my idea of what kids my age were into reminds me now of this 30 Rock bit.

During the second period of my first day of high school, I had math class. I was ready for this—math was my subject. At my middle school, academics were held in high regard, and the classes were competitive. Surely, the best way to earn the respect of my peers at this new place would be to sit as close to the front as possible, raise my hand for every question, and build a friendly rapport with my math teacher, right? I mean, who doesn’t like an overachieving math nerd?

Everybody. Everybody dislikes an overachieving math nerd. I was not a hit with the popular kids. I was not a hit with anyone. The girls with matching blond highlights and denim miniskirts rolled their eyes at me as they passed out of the classroom. The next day, I moved to the other side of the room, near a girl with a flannel shirt and band patches on her backpack. I imagined the contempt she had for the girls with the highlights and figured I could seek refuge with her.

“Ugh, she’s the worst,” she whispered to her friend as I sat down behind them. It took me a second to realize that she meant me. This caught me off guard—I was expecting some bitchiness from the popular kids (I’d seen The Breakfast Club), but weren’t all the outcasts supposed to band together? Couldn’t we unite over our shared rejection and become best friends? The answer was clearly no. She was disliked by the popular kids because she listened to the Stooges and wore thrifted clothing. I was disliked by the popular kids and her because I was an eager student and a teacher’s pet.

After a few months of eating lunch on my own, I eventually, totally by accident, fell in with a different crowd of “misfits,” none of whom were in my math class. Some of them had gone to my elementary school. We got along really well, I finally learned to be myself, and everything ended up all right.

Ha ha ha, no, just kidding. While the “misfits”—alternative kids, outcasts, whatever you want to call them—didn’t care if you straightened your hair or wore Abercrombie & Fitch, they still had their own unspoken code of conduct. And there were no magazines to consult for insight; they seemed to thrive on obscurity. They all instinctively knew what bands to listen to: Radiohead was cool, except for their first album, which was clearly super lame; Sonic Youth was cool, except for their latest album, which was even lamer than Radiohead’s first one. They knew what clothes to wear: they all mocked the expensive Ugg boots of choice while shelling out for Chuck Taylors.

Having people to hang out with after months of lonerdom made me so excited, I didn’t care if we didn’t have much in common. My new friends were never mean or cruel, but I started to intentionally distance myself from the things I liked, just so I could better blend in with them. Hanging out in my room once, a friend spotted a copy of YM with Hilary Duff on the cover. “Ugh, I can’t believe people actually like her music,” she said. I laughed in agreement, while secretly praying that she didn’t go anywhere near my CD collection.

This became a pattern. I hid the fact that I was a Junior Achiever and made excuses for why I couldn’t hang out on nights that I had meetings. I never mentioned that I tried out for the cheerleading squad, and that despite not making it, I still had massive respect for the sport. I hid or downplayed most of my own obsessions, like math and old Simpsons episodes. I never told them that most of the music they listened to just sounded like noise to me. (How could a band with a name as cute as Pixies make music that angsty?)

Our hangouts turned into me smiling and nodding silently during the conversations they had amongst themselves. I was terrified of what would happen the second they realized I wasn’t a “badass” like them. They smoked cigarettes and got high. They hung out in parking lots at night and swore in front of adults. My dream Friday consisted of renting new releases from Blockbuster and staying up past my bedtime, eating pizza and maybe even having two sodas. I soon started faking stomachaches when I went out, finding reasons why I needed my parents to pick me up from whatever party we were at so I could just go home and watch TV.

Pop culture led me to believe there is a dichotomy between the cool kids and the outcasts. Shows like Gossip Girl treat popularity as aspirational; Daria tells us it’s something to be reviled. My freshman year I was a neurotic mess, feeling like a freak no matter whom I was with, happiest when I was alone. I was neither a Cher Horowitz nor an Enid Coleslaw—both of whom seemed to be OK blowing off homework, which I could not wrap my head around.

Sometimes I wonder what would happen if all my favorite pop-culture misfits were put in the same high school. Would any of them even get along? Daria would probably moralize about Enid’s pranks, Enid would find Willow Rosenberg’s nerdiness dull, and all of them would roll their eyes at Lindsay’s friends in Freaks and Geeks.

I ended up going to several different high schools for a variety of reasons. Each one had a different idea of what was and wasn’t cool. When I started the 10th grade, I signed up for every extracurricular I could, whether they were considered dorky or not, both to meet new people and to challenge my perceptions of what I liked. I made the cheerleading squad this time around, and played rugby the following semester. (Neither were for me—turns out I hate sports.) I joined the improv team and learned there were people who thought my jokes were funny. I also tried to give the things I once dismissed another try: I ended up re-listening to the “noisy” music my ninth grade friends had liked, and now it’s most of what I listen to. (My 14-year-old self would scold me for risking hearing loss to see the Pixies when I was 19).

There’s a lot to be said for owning your interests and not trying to fit in with any one group in particular. It is fun and exciting to share obsessions with your friends, but that doesn’t mean you’re required to like all of the same things. It’s OK to not like One Direction OR Grimes, just like it’s OK to love both of them. Life is not a high school movie with clearly defined aesthetic boundaries, especially since most of the teenagers in high school movies—outcasts or otherwise—are played by conventionally beautiful, aggressively styled 20-somethings with problems that never seem to relate to your own. Really, there’s just no point in trying to force yourself into someone else’s definition of cool. It just makes high school suck more than it needs to. ♦