Notes From a Revolution: An Interview With Roula Seghaier

A teenage activist talks to us about her role in the Arab Spring and everything after.

Attention, Internet: Dogs Are the Best 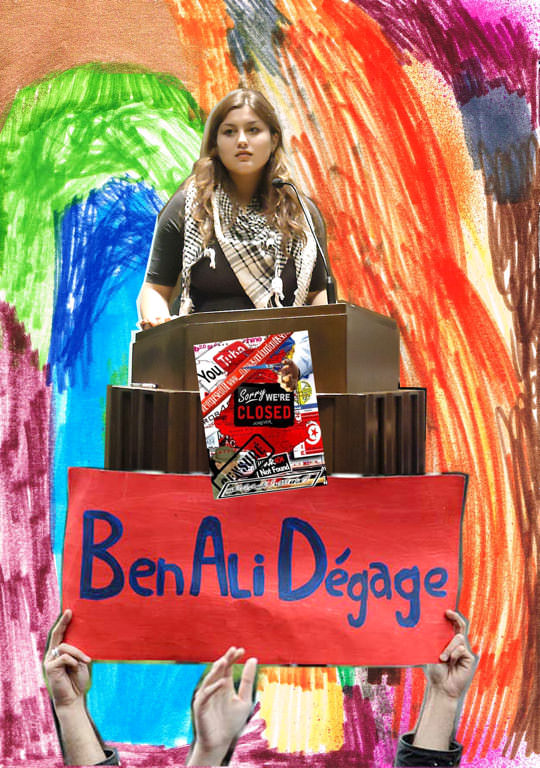 On December 17, 2010, an extreme act of desperation and frustration literally changed the world: when Mohamed Bouazizi, a fruit vendor from the Tunisian city of Sidi Bouzid, had his produce confiscated by a police officer—and this after reportedly enduring years of harassment at the hands of corrupt local officials—he stood in front of a local government building, poured a can of paint thinner on himself, and set himself on fire. He died in the hospital a few weeks later. In the wake of his self-immolation, Tunisians, including thousands of young people, took to the street in protest, demanding jobs, dignity, and justice, and calling for President Zine el-Abidine Ben Ali, who had ruled the country since 1987, to step down. Less than one month later, on January 14th of 2011, Ben Ali boarded a plane and fled to Saudi Arabia.

I was living in the south of France at the time and watching news coverage of what was happening in Tunisia. I remember crying when I saw footage of people out on the streets, protesting for change. But it wasn’t over. Inspired by Tunisia, the people of Egypt and Libya ousted their own corrupt leaders, and demonstrators challenged authority throughout Arab countries all over the Middle East and North Africa. There was energy in the air, like anything was possible, and like things that should always be possible—like the right to a life lived with dignity and humanity—were being fought for fiercely, bravely, and loudly.

That summer, I left France and began teaching at a creative writing summer camp for high school students in Iowa City. My camp had partnered with another program, Between the Lines (BTL), which invites teenagers from Arabic-speaking countries to take workshops alongside American teenagers. One evening, I attended a round-table discussion with BTL students about their experience and involvement in the Arab Spring—the term for the wave of revolutionary activity that started after Bouazizi’s self-immolation. One student, Roula Seghaier, talked about a demonstration she organized in her hometown in Tunisia. She was irreverent and serious and beautiful and hilarious about her experience.

Roula was born in St. Petersburg, Russia, and lived there for eight years with her grandmother before moving to Tunisia to be with her parents. She was a skeptic from an early age, seeing through Ben Ali’s secular government to its repressive and anti-democratic core, and she was thrown in jail at the age of 17 for protesting his regime. I caught up with her via Skype in September, just nine days before her 19th birthday. She lives in Beirut now, but is spending a semester abroad in Washington, D.C., where she’s studying political science at American University. She was four days into a six-day hunger strike when we spoke.

Hi Roula! So tell me more about the hunger strike?

The Students for Justice in Palestine are protesting Israel’s detention of Palestians without cause. We’re standing in solidarity with the Palestinian detainees. It’s almost our fifth day, and we are dying. We were supposed to do it until they are released, but it’s just not realistic. It sounds ridiculous, like, “Oh, it was too hard.”

It doesn’t sound ridiculous at all! I’m impressed and moved by what you are doing. Have you ever gone on a hunger strike before?

No, this is my first.

Were you raised to be religious?

Yeah. My mom is Russian orthodox, and my father tried to raise me Muslim. I had 13 years of Islamic education. I used to get straight As, and everyone used to laugh, because I was the only atheist in the class, and the only person scoring As. My father used to hang pictures of Allah in my room, and I would cry. He would ask me, “Why are you crying?” And I would tell him: “It’s not pretty!” So he bought me a pink frame to make it pretty. I didn’t come out to him as an atheist until last year.

Well, he called me during Ramadan this year, and for the first time, he didn’t ask me if I was fasting.

When did you first become aware of oppressive elements in the Tunisian government?

Very early. In my primary school years, I knew there was something wrong. We had a civics class that taught us that Tunisia is a democratic country. That was the only sentence you had to write in order to get your A. You could do a weather report for two pages and then say, “Tunisia is a democratic country.” I realized that wasn’t true. My father was banned from working as a journalist because of his Islamic tendencies.

Another example: in Tunisia, if you are a hairdresser, that carries a social stigma, because the girls who become hairdressers are usually dropouts. The wife of our ex-president [Ben Ali] was a hairdresser. So for 23 years, we did not have a single commercial for hair products. Not on TV, not on a billboard, not anywhere, because the president was so afraid that people would see shampoo and be like, “Oh, his wife is a hairdresser!” We’ve always had censored books and media. In May 2010, we organized a flash mob in protest.

It’s hard to track it back to one person. Mainly students, and some famous bloggers, like Slim Amamou and Lina Ben Mhenni. I was just one of the local organizers in my city, getting volunteers to attend. People were supposed to show up in T-shirts that said something in Tunisian, like “John Doe 404,” because when you went to a website that was censored, it said “error 404.” When we went to get the T-shirts printed at a factory, the guy refused to print them. So we changed the sentence, but he still refused, and so we changed it a third time, and he said OK. When we went back to get the T-shirts, the police arrested us. That time, I was released, because I had my Russian passport.