Literally the Best Thing Ever: Shows Within Shows

When I was growing up, my parents discouraged me from watching TV. They dismissed it as shallow and vapid—a total waste of time. But I’ve always disagreed. Some of the best fiction writing is happening on television—when writers have multiple episodes each season across which to build characters and a story arc, their worlds can get pretty elaborate. (This is a much more coherent version of the argument I presented to my parents when I was a kid to try to persuade them that I needed to stay up to watch The Fresh Prince of Bel-Air.)

Some of my favorite TV moments are when the characters within these fictional universes are themselves obsessed with TV shows. It’s super meta, but also super relatable to anyone watching—OMG, my TV friends have their own TV friends! Sometimes they watch programs that have actually existed, like when the characters on Mad Men talk about catching up on Peyton Place. But the best are those instances when writers go the extra mile to create an entirely new TV show inside their main show, like a mirror reflecting a mirror, an inner inner world, an Inception for the small screen.

Some of these shows-within-shows comment on the first-level show, like The Valley, the teen soap that Summer Roberts was obsessed with, and which mirrored the action going on in her own teen soap, The O.C. 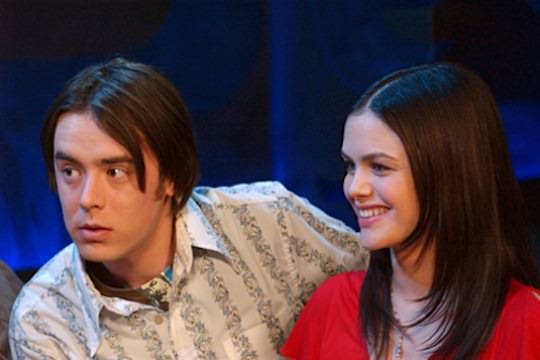 (And, just like The O.C. inspired the reality show Laguna Beach: The Real Orange County, The Valley has its own reality-show counterpart, Sherman Oaks: The Real Valley. Are you dizzy yet?)

Other shows-within-shows are obvious parodies of other real-life shows. Fictional programs will sometimes be mentioned in passing on a 30 Rock episode (like when Liz Lemon’s date Wesley compares their relationship to “Russ and Rebecca on Chums”); but sometimes we get to see substantial clips.

I like to imagine that the characters within these shows-within-shows have their own programs they obsess over, creating a never-ending chain of increasingly ridiculous premises. Here are just a few in-universe shows that I secretly wish were real.

Cynical, eye-rolling best friends Daria Morgendorffer and Jane Lane don’t like most things. But one thing they’re both really into, and not ironically, is Sick Sad World, a “news” program that focused on only the most surreal, twisted stories that lend themselves to punny headlines: “Thomas Jefferson: Philosopher. Inventor. President…and keeper of one saucy journal! The declaration of in my pants, tonight on Sick, Sad World.”

Sadly, you never got to see much of the show beyond the vehemence of its announcer, but really the headlines were all you needed. Sick Sad World was a snappier, more surreal Jerry Springer with a killer logo. It also humanized Daria; as much as I admired the character, she could be frustratingly judgmental of her classmates’ lowbrow interests, while she preferred to take in art films and literatooooor. Her love of Sick, Sad World reminded us that she wasn’t DEEP 24 hours a day, and that she was still a teenager.

The Itchy & Scratchy Show (from The Simpsons)

This Tom and Jerry-type show brought cartoon violence to a whole new, stomach-churning level, as every episode has Itchy (that’s the mouse) finding creatively sadistic ways to off a cat named Scratchy. There was never any punch line to Scratchy’s cataclysmic deaths (don’t worry, he would regenerate unscathed by the next episode), yet every segment would have Bart and Lisa Simpson in hysterics.

Itchy & Scratchy was used as a forum to comment on both the ridiculousness of cartoon violence and The Simpsons’s own cult following (while proving that, yup, there is more than one way to skin a cat). In one Simpsons episode about censorship, Marge is horrified by the brutality on the cartoon that her kids are watching, so she starts a protest against television violence. Her campaign is successful, but the children of Springfield won’t watch the sanitized version of I&S—turns out, kids don’t like cartoons unless there are guts and ridiculous explosions.

Like The Simpsons itself, Itchy & Scratchy attracted a bunch of celebrity guests, including Quentin Tarantino and Oliver Stone. The in-show show made its share of creative mistakes—in a desperate attempt to boost ratings (and a way for the Simpsons writers to satirize the kinds of notes TV creators get from network executives), I&S introduces a new character in Poochie, an obnoxious rapping surfer dog. When everyone in Springfield (except Homer) hates the new addition, he’s yanked back to his home planet—and dies on the journey.

Queen of Jordan (from 30 Rock)

One in-universe show, though, got extra screen time. Two full episodes of 30 Rock, in fact, were “replaced” by episodes of a fake reality show called Queen of Jordan, a Real Housewives-type program starring Tracy Jordan’s wife, Angie, and her entourage. Queen of Jordan introduced an entirely new cast of characters and new stories, while also contributing to the plot of 30 Rock. When Tracy disappears, Liz, in a desperate attempt to find him and save her own show, appears on Queen of Jordan to implore Angie to help her. (Angie, meanwhile, is getting ready to drop her new single, “My Single Is Dropping.” Liz confronts her at the release party. Will this tangled web of chaos lead to an entertaining showdown? Spoiler: yes.)

When his beloved Cougar Town goes on hiatus, TV fanatic Abed Nadir discovers its British predecessor, Cougarton Abbey. When that show is cancelled after only six episodes, he moves on to Inspector Spacetime, a Doctor Who homage, and is immediately obsessed. He starts using the show to heighten his real-life experiences: planning his holidays around viewing sessions with his friends, character role-playing at fancy events, and converting the spare room in his apartment into a “dreamatorium” in which he literally lives out his own fan fiction. Inspector Spacetime becomes a huge presence in Abed’s life, and his relationship to the show is one of the most accurate portrayals I’ve seen of contemporary fandom. Not that I’d know from personal experience or anything. ♦