Anthropomorphic animals offering life lessons. What more could I want? 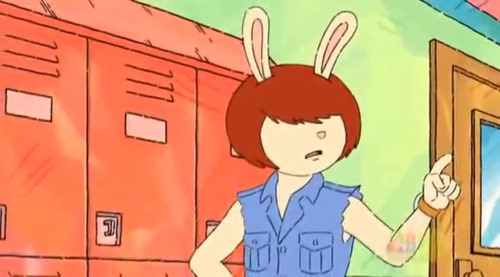 For a number of years now, I have kept a secret: I love the PBS Kids Go! cartoons that aired on weekday afternoons from 3 to 4:30 PM in New York City in the mid-2000s (and which continue to air today). I know that I am not the target audience for such programming, but ever since the fateful summer of 2004, when I moved out of the college dorms and into my own apartment, with no money (and maybe no desire) for cable, PBS was my only friend. It was the only channel I could watch (I had rabbit ears on the TV and everything!), and those being pre-Netflix days, the only one I did watch. During those first three or four months, when I had a lot of free time between summer courses and a part-time job, I developed a fondness for those cartoon characters, like Snook, the super rad sloth from It’s a Big Big World; Cleo, Clifford the Big Red Dog’s poodle friend; and, of course, Arthur.

Throughout the years, even as I moved to apartments with nice televisions and too many available channels, I would inevitably end up watching Arthur on my lazy afternoons. The moment I heard the opening chords of the series’ super-happy theme song by Ziggy Marley & the Melody Makers, my worries drifted away. Arthur Read is an eight-year-old aardvark living in fictional Elwood City with his parents, sisters D.W. and Kate, and a dog named Pal. This is classic educational storytelling, so there’s always an array of diverse characters teaching us—and by “us” I mean me and some actual kids—literally everything about living so that we become decent human creatures. Although the show centers on Arthur, it’s his friends and Elwood City’s other inhabitants that really make the series for me. After watching 16 years’ worth of episodes, I’ve gotten to know their idiosyncrasies quite well! Arthur’s classmate George is a moose who suffers from nosebleeds and carries around a giraffe puppet named Wally, which is a little bit creepy. The Tibble Twins terrorize D.W., but they bring all the fun to the episodes. And my absolute favorite character is Molly—she goes to the same school as Arthur and is a member of the Tough Customers, the best-named gang of bullies ever. She wears a denim vest and ripped jeans and has thick bangs that cover half of her face—plus, she skateboards AND plays the guitar! She’s usually in the background of playground scenes, but I love her because she is a total badass.

The story lines are just as lively. The best episode in recent history is “Muffy and the Big Bad Blog.” I recommend you watch it as soon as humanly possible, because it is the most exquisite reflection of modern times ever captured on television. Basically, Muffy becomes obsessed with blogging to the point where she can’t enjoy real life anymore, because she’s too busy trying to write everything down in The Muffington Post (for cryin’ out loud!). She even gets in a fight with her best friend, Francine, after she publishes some of Francine’s personal emails. IT IS RIPPED FROM THE HEADLINES!

Another time, an entire episode was devoted to architecture (bonus Frank Gehry cameo!), and Arthur’s friend Buster, who is obsessed with food, designed a tree house made out of pizza, which is exactly what I wish the Rookie offices looked like in real life.

Next up is Martha Speaks, a cartoon about a yellow dog that can talk, thanks to an alphabet-soup malfunction—on the way to her stomach, the noodle letters got lost and traveled to her brain instead (of course!). This theme song might actually be my most favorite. The guy that sings it has a super-soothing voice, the kind that really only exists in children’s programming. Second, Martha does this great little dance while she’s singing, one that I can imagine a real dog doing, and then she sings, “HYPERVENTILATE!” after running out of breath. She sounds like Friends’ Phoebe Buffay on too much Red Bull, and it is really, really cute. Martha’s held a few jobs: she’s been a telemarketer, a substitute teacher, and a translator for the local veterinarian. But the best thing about her is that she has a dark past—she used to work with thieves! Which is kinda twisted for PBS, but I LOVE IT! I’ve always thought the reasoning for Martha’s ability was totally creative, and my favorite episodes are the ones that explore/exploit this phenomenon, like when the soup company decides to cut costs by taking some of the letters out of the soup, and as a result, Martha can’t speak properly! The whole thing is so ridiculous, and yet it makes perfect sense in a world imagined from a child’s perspective, or if you bend the rules of reality just a tad.

Then it’s time for WordGirl. In case you haven’t noticed, the theme songs are important to me, and this one is outrageously dramatic, like the the Batman theme meets VH1 Divas. WordGirl is an alien from the planet Lexicon (get it?) who was adopted by the Botsford family and goes by Becky. Her pet monkey, Captain Huggy Face, is a former pilot whom the family renames Bob. The series is a classic superhero tale that also takes care to teach some new words in preparation for a lifetime of standardized tests! There’s a Powerpuff Girls vibe to the crisp, bold animation, but the thing that really made me stop and pay attention was the realization that SNL’s Chris Parnell contributes a number of voices to the show, including that of the narrator. (Kristen Schaal, whom we adore from 30 Rock AND Bob’s Burgers, and Kevin McDonald, one of my favorite funny dudes ever, from the awesome ’90s sketch comedy The Kids in the Hall, voice other characters.) I love how the writers have created such an ODD world for WordGirl, filled with bonkers food references. There are delightfully ridiculous villains like the Butcher, who can make meat materialize out of thin air, and then literally bury WorldGirl in heaps of pastrami. Other villains include the Baker, Kid Potato, Chuck the Evil Sandwich-Making Guy, and the Masked Meat Marauder, who tries to defeat the Butcher with FANCIER meat, hurling filet mignon in a cognac sauce at his enemies. That took my love for this show to another level, because holy moly! A meat battle!

My favorite villain, however, is not named after food. Lady Redundant Woman, an ex-copy-shop employee who breaks bad after an on-site accident allows her to copy herself, uses the copies as her minions—which is totally punk rock. I don’t know, I just kinda want her to win sometimes. I basically want all my shows to be a perfect mix of nonsense and food references.

But once the Cyberchase theme song came on, I knew it was time to leave the house or take a nap Cyberchase is about math, but in an obvious way, AND it features the voice of Gilbert Gottfried, so it’s just not my cup of tea.

Even though I did get Netflix a few years ago, I continue to watch these cartoons. It’s a break from all the X-Files and intense crime dramas I rent. And sometimes I just miss being a kid. These cartoons are my sanity. They fill my brain with positive vibez and make me hate the world just a little less. ♦