Literally the Best Thing Ever: M.I.A.

Let me count the reasons. 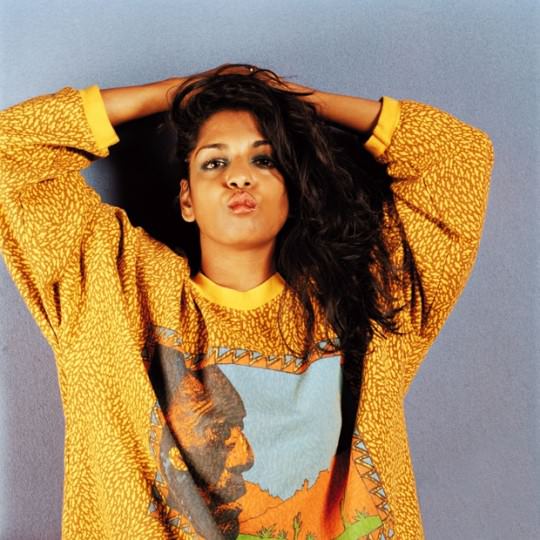 Over the past two weeks, I have tried and tried and tried to write this article. I have been trying to write this article since before I even knew I would be writing this article. I started to write about how when I was in college, I had one group of friends who were ARTISTS and another group who were ACTIVISTS, and the two didn’t mix at all. If you loved art, then you were frivolous and wild and funny and irreverent and provocative but in a way that was solely about the making and creating and consuming of art; and if you were an activist, you were serious and angry and you liked reading boring, constipated, jargon-y academic books about ISSUES like RACISM and SEXISM and QUEERNESS and OPPRESSION, and there was no time for the frivolous, superficial world of art; even though in my heart, I knew that the two had to go together, that it’s impossible to make meaningful art without being interested in the world beyond the one you know, and part of wanting more humanity in the world is deciding that art is meaningful and that all people should have the right to access and create it.

I tried to write about when I first heard of M.I.A.’s music. How I was in my last semester of college and reading about Operation Babylift, and I learned that many of the 4,000 children and infants who were “rescued” from Vietnam during the final days of the Vietnam War, were not, in fact, orphans at all, and that that meant entire families were separated under the guise of “humanitarian aid,” and that most of those families were very poor and lacked the resources to later track down their children who were now living as adoptees in America. How in the middle of reading about all that and feeling sick to my stomach because it was another example in a long history of white folks trying to “save” brown and yellow and black folks, my boyfriend at the time barged into my dorm room with a copy of M.I.A.’s first album, Arular, and he was like, “You’re gonna love her. She raps like a demented middle-school delinquent, and her father was a Tamil Tiger,” referring to the Liberation Tigers of Tamil Eelam, a militant separatist group that has fought for an independent state for the Tamil minority in Sri Lanka. That assertion turned out not to be true, although it was true that her father, Arular, left the family when M.I.A., or Maya Arulpragasam, was two months old to train with the Palestinian Liberation Organization and to later form the Eelam Revolutionary Organisation of Students, a group that also fought for Tamil independence.

I tried to write about how it felt the time I had a dance party in my dorm room and I was playing Arular on my computer and at one point, I looked around and realized that most of my friends were people of color, and we were dancing to music by a radical woman of color. We were dancing to songs with lyrics like “Pull up the people, pull up the poor” and “Blindfolds under homemade lanterns / Somewhere in the Amazon / They’re holding me ransom.” And the sad truth was that M.I.A. was the first brown woman I had ever seen on television NOT in the context of some PBS documentary about global poverty or village life in war-torn Southeast Asia. When she started appearing on the cover of magazines like Rolling Stone and Spin, I realized that I had never seen a Southeast Asian woman on the cover of a major magazine that wasn’t National Geographic, that it was the first time I had seen a brown woman looking so PUNK and so FLY, like the kind of badass who flips you the middle finger just to say hi before embarrassing you in a dance-off. I can’t even tell you what it meant to me to FINALLY see a photo of a brown woman who wasn’t dressed in “native” or “indigenous” garb, talking about being a Tamil refugee from Sri Lanka and the brutal, systematic, state-sponsored violence waged against her people—in a mainstream magazine read by people like you and me who knew next to nothing about the struggle of the Tamil people because major news outlets were barely reporting about it. I can’t begin to explain how moved I was to see a refugee being the protagonist of her own story, refusing to be the object of a white, Western gaze, who insisted on being her own subject, whose visibility signaled a refusal to be mere background scenery, who sang catchy, weird, danceable songs about bombs and tanks and guerilla warfare and poverty and refugee camps and racial profiling and police and military brutality.

I have started and stopped and gone back and erased everything and started again because I want to get this right.

Because when I was growing up, I never thought that there would come a day when a radical woman of color would be making music that people loved, while advocating for the right of her people to take up an armed struggle for independence and self-determination. Because M.I.A. has always made it clear that she cares about politics, and not just politics, but the people who are impacted by politics, those whose lives are most affected by policies made by people who have the power to tell or silence the lives and histories of entire groups of people.

Because women and people of color have always been shamed for being too “emotional,” for daring to bring the personal into the political. Because the political is the personal. Because when you are a refugee who cannot go home because your own country is no longer safe to live in, how can you be any other way but emotional? When civil war has torn your country apart, when civilians in your country are taken hostage and killed in the crossfire, when you are the target of police brutality and racial profiling, when your very existence is criminalized and threatened because of your race or ethnicity or gender or sexuality, how can you take it any other way except personally?

Because I don’t think I was the only teenage girl or am the only adult woman who was and is afraid to speak out about my beliefs because people tell you that if you even try to do that, you’d better be prepared to spend all of your time fighting injustice and being the most educated, informed, serious person in the entire world, and you can NEVER EVER EVER care about superficial things. Because only people who are politically apathetic can get away with being superficial. We reward people for their political apathy or silence by not holding them up to the same impossibly high standards to which we hold people who might care about politics, even those who are just learning about them.

Because M.I.A. has always rejected all of that nonsense. Because she once said in an interview for Clash magazine, “Sometimes I repeat my story again and again because it’s interesting to see how many times it gets edited, and how much the right to tell your story doesn’t exist. People reckon that I need a political degree in order to go, ‘My school got bombed and I remember it ’cause I was 10 years old’… I think removing individual voices and not letting Tamil people just go ‘This happened to me’ is really dangerous.”

1 2
Next →
activism art literally the best thing ever m.i.a. politics