It Takes a Lot to Laugh

Using humor to deal with racism. 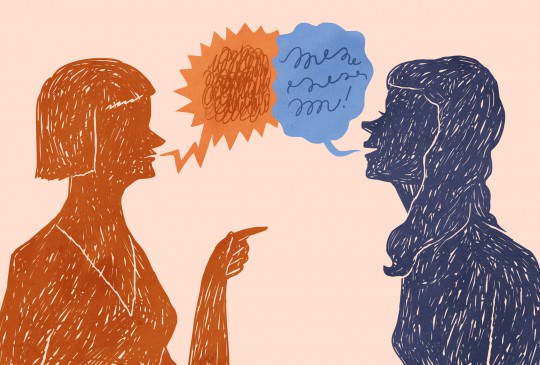 Three years ago, when I was going to grad school in Iowa City, I went to see Melt-Banana, a Japanese noise rock band, and while we were waiting for the band to set up, this drunk girl grabbed my arm and asked me, “So, are you with the band?” Maybe she didn’t mean anything by it. Maybe it was just a harmless, drunk question. Maybe I didn’t need to read anything into it. And maybe the time when my friend E., who is Taiwanese-American, visited me in Iowa City, and we started to get this really creepy feeling like everyone who saw us walking down the street together thought we were either foreign exchange students or related to each other—maybe that time I was just being paranoid as well. And maybe the time when I took a shuttle van to the Cedar Rapids airport and was subjected to 30 minutes of questioning by my driver on what it was like to have grown up in “Communist China,” those were innocent questions, even though I had explained to him that I actually grew up in Queens, and that I left China when I was four and a half. And maybe when he insisted that I was “in America now and shouldn’t be afraid of speaking freely,” he was honestly trying to help. And maybe all the times that I walked into a store and, apropos of nothing, was asked by someone, “So where are you originally from—China or Japan?” those were just sincere inquiries with regards to my heritage.

Or maybe other people didn’t have to put up with this stuff, and maybe I didn’t want to, either. Maybe it wasn’t an innocent coincidence that at a concert where a Japanese band was headlining, some drunk girl decided to come up to me, the only Asian person she saw at the show, single me out, and ask me if I was in the band.

She looked at me askance and said, “C’mon, what instrument do you play? Are you the singer?”

And maybe at that point, it was OK that I started to feel like shit and turned to my boyfriend and said, “That girl just asked me what instrument I play in the band because I’m Asian.”

In middle school, I had a classmate whose mom would sometimes drive me home from school; once, when we were stuck in traffic, she yelled out, “Move!” to the car in front of us, and then muttered, “Chinks,” to her daughter, who started giggling. When I lived in France, every single day, random strangers would pretend to karate-chop their way to me on the street. Whenever I went outside, men would shout out all the Asian-language words they knew, which were usually some combination of ni hao, arigato, and konichiwa.

And those are just the obvious, easy examples. There were less-obvious ones, too. I have known plenty of people who considered themselves properly socialized, tolerant, good people, who would never tell me that Chinese people have slits for eyes, or that our names sound like pots banging, but those same people still hurt me when they confessed that they honestly could not tell the difference between Chinese, Korean, and Japanese people. They still hurt me when they told me that the zongzi I brought for lunch every day smelled weird and grossed them out. They still hurt me when they laughed during the parts of movies when the broken-English-speaking Asian character showed up for comic relief.

This should go without saying, but I’ll say it anyway: no one deserves to be hurt by racism. This seems like an easy statement to abide by, until you realize that racism is not always intentional, and it’s not always obvious, and sometimes people don’t agree what constitutes racism or even acknowledge that it exists. And for those reasons, sometimes, it sucks to talk about it, it sucks to think about it, and it sucks to have to deal with it at all. But if you are a person of color, chances are at some point you are gonna have to deal with it, and for me, when I was first confronted with it, I went from feeling hurt to feeling active self-loathing to feeling full-on apeshit angry. All of it sucked.

That said: at some point, when dealing with racism—especially casual, genteel racism that can be easily dismissed by others—being angry all the time is only going to deplete you completely. And very few people—whether they are high school kids, teeny tiny kids, grown-ass adults, or your friend’s grandparent who still freely speaks in outmoded, endearingly antiquated racist phrases—are gonna stick around and listen to you explain why what they said was hurtful and wrong. Anyway, it’s exhausting to always have to be the one to “teach” others how to recognize racism when it ain’t something as obvious as calling someone by a racial slur or doing physical violence to someone because of their race or ethnicity.

As a person of color, I believe racism is a serious matter. But just because it has affected me in serious ways doesn’t mean I can’t or don’t want to have joy and humor and play in my life. In fact, I want more of those things to balance out the moments when racism leaves me feeling joyless. Sometimes humor is one’s best defense—even if it means the only person laughing at the punch line is you. Stephen Colbert once said in an interview, “Not living in fear is a great gift, because certainly these days we do it so much. And do you know what I like about comedy? You can’t laugh and be afraid at the same time—of anything. If you’re laughing, I defy you to be afraid.”

Racism is scary. Being the target of racism, having to exist in a racist world, is scary. Feeling like you have no power to stop it is scary. Here’s what you can try to do when you just want to laugh and not have to feel afraid:

Use humor to call people out on their racism.

The always brilliant Wanda Sykes has this bit in her stand-up where she talks about her thoughts on white folks who claim that they are the targets of “reverse racism.”

Her shutdown is simple and to the point. She says, “Isn’t reverse racism—isn’t that when a racist is nice to somebody else? That’s reverse racism.” And then she says, “What you afraid of is called karma.” BOOM. ROASTED.