In Spite of the Easy-Bake Oven

I was not going to let this stupid piece of plastic spell the end of my culinary career.

The Things We Leave Behind 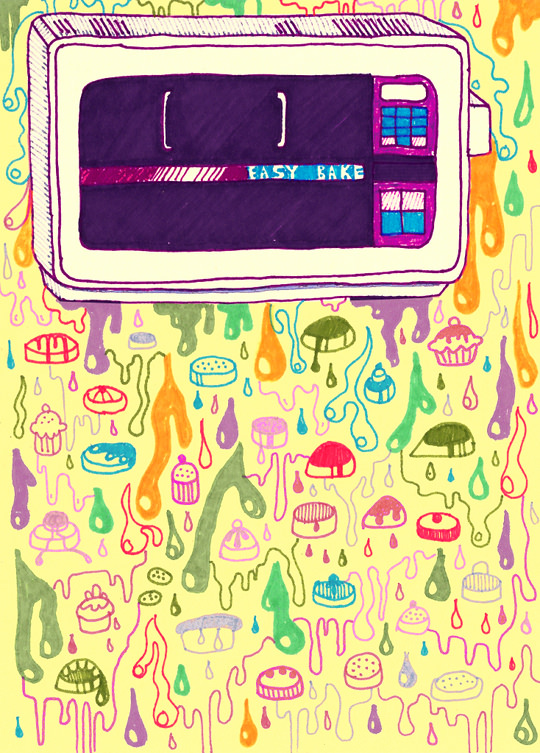 One day, I was flipping through the channels when I caught a part of a segment on “women in the workplace.” As I recall, a young woman in a beige pantsuit yelled something along the lines of “DO NOT BAKE FOR YOUR CO-WORKERS! NICE GIRLS DO NOT GET THE CORNER OFFICE!” This warning struck a chord with me. See, for most of my teenage years, I’ve been categorized as a Nice Girl Who Bakes Things. During high school, I was even president of the baking club, where we made chocolate chip cookies and sold them to raise money for a food bank. I know that bake sales aren’t a solution to the world’s problems, but there was something so satisfying about seeing stone-faced administrators break down and buy multiple Rice Krispies Treats or lick Funfetti frosting off of their fingers in the name of charity.

But I don’t just bake things in a sugar-coated attempt to help the world. I do it to help myself. Some people turn to meditation or kickboxing to relieve their stress, but I prefer to violently whisk batter. Yes, I am aware that this makes me sound like the protagonist in a film targeted toward women between the ages of 35 and 60, but methodically measuring and mixing brownie ingredients is how I reassure myself that there is order amidst chaos.

Baking was a skill I had to lobby to learn. Before I had access to “grown-up” appliances, my parents bought me an Easy-Bake Oven—and this was after many Christmases of begging and pleading for one. I pictured myself unwinding after school with my friends over dozens of perfectly frosted cupcakes, like a bunch of prepubescent Marie Antoinettes. My parents, on the other hand, pictured my room infested with roaches as the crumb-covered oven sat neglected under my bed. If you’re unfamiliar with the toy, it works like this: you open a tiny package of cake mix, add some water, stir gently, and pour it into a tiny pan. Then, you slide it into the “oven,” which is a hot-pink, stove-shaped plastic box with a light bulb in the center that provides the heat. (There is a reason why you have never seen actual appliances that use light bulbs to cook food: THEY DON’T WORK. Later versions introduced a genuine heating element.) The toy’s commercials made the whole process look like a piece of cake, but I could never get it right. My treats always turned out tasting like baking soda and took FOREVER (or at least “forever” from a seven-year-old’s perspective) to bake. Seriously, I have a distinct memory of my mom roasting a chicken while I attempted to make a vanilla cake, and the chicken was ready first. Upon offering the concoctions to my dad, he always suggested we top them with some chocolate syrup before eating. My dad will find any excuse to put chocolate syrup on something, but now I realize that he would not have been able to swallow the cake without it.

Besides causing indigestion for kindhearted parents everywhere, the Easy-Bake Oven suggested, with its pink-and-purple color scheme, that only girls—girls who presumably didn’t want the corner office—should play with it. I suspect this wasn’t the case. In 2002, Hasbro introduced a boy-version of the toy called the “Queasy Bake Cookerator,” presumably to appease all of the insecure parents who panicked when their sons wanted to play with their sister’s Easy-Bake. Boys should never be seen playing with an oven! But a “cookerator?” That sounded decidedly scientific. Hasbro took out all of the “girly” aspects of the toy and replaced them with brains and slime. In the commercials, a villainous chef encourages these little men to rebel against the fine-dining establishment by throwing sugar worms on their food. (I like to imagine Chef Queasy as a down-and-out chef whose restaurant was closed due to health code violations, and thus he found his calling as a mediocre toy maker.) Instead of simply making cupcakes and cookies, the oven pumped out Chocolate Crud, Mucky Mud, and Delicious Dirt cakes that turned your mouth green. The Easy-Bake Oven taught girls how to pipe delicate frosting flowers, while its evil twin brother let boys pour candy-flavored blood and guts on their creations. I don’t know about other girls, but I wanted my mouth to turn green!

Finally, my parents saw my simultaneous frustration and determination with the Easy-Bake and agreed to let me use the real oven under what turned out to be not-so-strict supervision. My mom knew little about baking beyond following the directions on the back of the Betty Crocker box, so she took me to the library to find multiple books on the subject. She taught me how to measure ingredients, but I mostly learned to bake by myself, trying out techniques as I went along. By the time I was nine, I had immersed myself in the dangerous world of pastry! At last, I could crack eggs and pull hot pans out of the oven. Knowing that I had the power to spread salmonella to my entire household was completely terrifying and prompted me to wash my hands about six times after handling yolks, but it still felt totally thrilling. I’m pretty sure this is why I tackled lemon bars for my first grown-up baking project (the recipe required a half-dozen eggs).

Tasting my first successful experiment was incredibly satisfying, not just because food that isn’t cooked under a light bulb tastes better than food cooked under a light bulb approximately 100 percent of the time, but because I’d created something on my own. Teaching myself to bake opened up entirely new dimensions of the snack world that I previously thought unreachable. Banana doughnuts topped with peanut butter frosting were no longer just a dream, but a snack-time reality! And if I wanted to crush some potato chips into my brownie batter, no one could stop me, because I was the master of my own dessert universe.