A tribute to one of the greatest fictional teenagers—animated or otherwise—of all time. 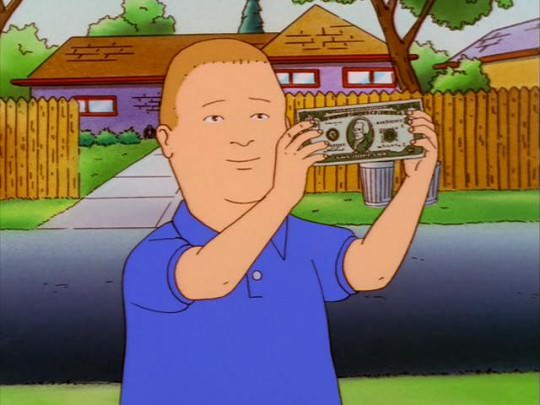 “Readers are generally sympathetic toward a lead character who is rather gentle, sometimes put upon, and not always the brightest person. Perhaps this is the kind of person who is easiest to love. I really don’t know.” —Charles M. Schulz, My Life With Charlie Brown

There is nothing outwardly extraordinary about Bobby Hill, the kid King of the Hill, a half-hour TV cartoon that ran from 1997 to 2010 on various channels. In his standard blue T-shirt, long shorts, crew cut, high socks, and tennis shoes, he looks a bit like a bored, doughy toddler crossed with an 85-year-old man. But Bobby Hill is one of the greatest fictional teenagers—animated or otherwise—of all time. He’s a hero to me; here are a few reasons why.

Though he’s often misunderstood by his football-loving father and control freak mother, Bobby makes an effort to extend understanding and empathy to others. He’s constantly helping his awkward best friend, Joseph, deal with the horrors of puberty—even before he’s gone through it himself, and even when Joseph’s hormones lead him straight to Bobby’s girlfriend, Connie—and he provides Connie with an open-hearted escape from her overbearing parents, bringing her out of her highly competitive world and into his dreamy ADD orbit, where there’s far less academic pressure and more of an emphasis on romantic ideas and the potential for adventure. Even though his desire to be accepted and adored can lead him down the wrong path—like, say, pretending he has a kidney problem and that his girlfriend has a tail so that the high school kids will them to attend the prom out of sympathy—he always circles back around to the right thing, remembering that the people who love him for who he is will always be more important than the people who love him for who he desperately pretends to be.

2. He challenges his father’s ideas of what a son should be.

The men of the Hill family don’t deal that well with different takes on masculinity. Bobby’s grandfather, the supremely temperamental WW2 veteran Cotton, is constantly going on about what a disappointment his son (Bobby’s dad) Hank is, and though Hank isn’t that harsh with Bobby, you get the sense that Bobby isn’t exactly the son he dreamed of having. Cotton proves his manhood by buying hookers and drinking and generally being a dick to everyone, while Hank, a former high school football star, prides himself on being an upstanding propane salesman who always does the morally proper thing. Bobby, meanwhile, is the type of kid who gets gout in his toe from secretly eating deli foods, and couldn’t be more delighted when he’s presented with a cane by the doctor, asking, “Does it come with a hat?!” in front of his mortified parents.

The misunderstandings between Bobby and his father are usually about intentions. In the episode “I Remember Mono,” Hank is horrified to find that Bobby has created a valentine for his friend Joseph that includes a candy heart that reads “Hot Stuff.” When Hank tells him not to give the card to his friend, Bobby replies: “Why not? He is hot stuff! You should see him skateboard!”

And while Hank constantly worries that Bobby isn’t “normal,” Bobby always seems to make his dad weirdly proud, like when he creates “The Propaniacs,” a comedy troupe that tells propane-based jokes that Hank adores, or when he outshines his mother in home-economics skills, subverting Hank’s notion of what “women’s work” is.

Yes, Bobby weirds his father out, asking questions like “What does a razor smell like? I bet it smells good! Like metal!” while his father shaves, but all Hank wants is for Bobby to become a man, and as the show progresses, it becomes clear that he’s well on his way—it’s just that Bobby’s definition of “man” is a little different from his dad’s. (A similar dynamic is currently taking place on Modern Family, between Rico Rodriguez and Ed O’Neill.)

To prepare for his first boy-girl party, Bobby practices his “moves” on a dummy head that his cousin, Luanne, has brought home from beauty school. It’s a brilliant move—suddenly he’s more confident with girls at school, able to use his newly found skill set on the real deal. When he gets stuck in a cave with Joseph and Connie, he offers them his body to eat, should it come to that, and instantly wins Connie’s heart for his bravery (though, as his friends point out, he could have avoided the whole “you’ll have to eat me” thing by not binging on their supply of chips due to his tendency to eat when he gets “upset”). He scores his own bachelor pad by pretending to have horrendous allergies that require him to live in the doghouse. He’s even able to convince everyone at Tom Landry Middle School that his secret admirer may, in fact, be Olympic gymnast Kerri Strug (turns out to be his grandma, but a boy can dream). He makes his way onto the academic team by displaying his expertise in pop culture. He finds a way to ingratiate himself into several social groups, just by playing to his natural strengths as a charming, open person.

Unlike his stubborn mother and his stoic father, Bobby is open to new and different ways of thinking. He flirts with witchcraft (“Wow, cool lair!” is how he greets the Coven of Artemis), Buddhism (he has a brief run as a lama), Judaism (he promises to celebrate Hanukkah if it means he can get a pen-and-pencil set and obtain manhood by having a Bar Mitzvah), Evangelicalism (through his born-again skate punk crew, who shout “Praise Him!” after every trick), and vegetarianism (for the benefit of Marie, a beautiful girl he has a fling with, before she breaks his heart and he exacts his revenge by eating a 72-ounce steak right before her eyes). He is constantly trying to figure out his place in the world by following every path that arrives at his feet, forming an identity the way most of us do—by trial and error, dipping in and scurrying away, looking for the versions of ourselves that we know await us outside of our childhood homes.

That’s his purse, and he doesn’t know you.

Nearly everything Bobby Hill says is a gem, thanks to Pamela Segall Adlon’s perfect voice work and the consistently excellent (and always underrated) efforts of the KOTH writers. There are a million examples I could give you—the show had 259 episodes—but here are a few of my favorites:

“Even in my dreams, I could never dream that a place like the Showbiz Deli could exist. It’s food with a punch line!”

“I don’t think I can ever go back to cocoa!”

“Something romantic and frilly, like the wife of a magician would wear.” —on the lingerie he wants to buy for Kerri Strug

Connie, on puberty: “You don’t understand. You’re not there yet.”
Bobby: “You better check the map, honey, because I am living in downtown there!”

And basically everything you can find here, on the Bobby Hill Soundboard.

There are so many layers to Bobby Hill’s character—goofy, weird, adorable, annoying, corny, naïve, moody—that even at his most ridiculous, there’s something relatable and true about him. Who hasn’t practice-kissed something? Who hasn’t turned to cookies or chips once in a while when their nerves kicked in? Who hasn’t been misunderstood by their parents, or felt like they were falling behind their peers, or wanted desperately to appear older, or cooler, or like they belong? Who hasn’t wavered between being a kid and being a teenager, unsure of how to proceed? Who hasn’t written a history report on President Martin Sheen?

7. Oh, and he has a Mrs. Doubtfire lunchbox. 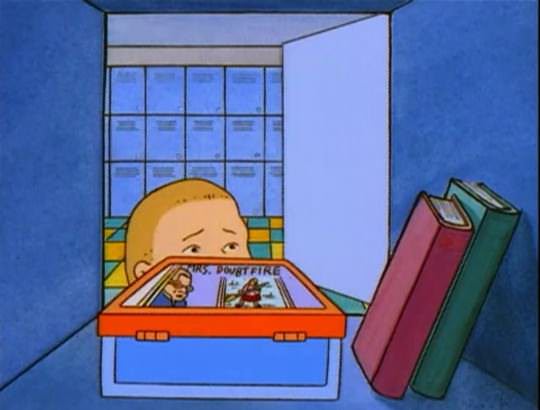 He has a Mrs. Doubtfire lunchbox. The end, wrap it up, give this boy a blue ribbon. He’s not just good, he’s Branson good. ♦