The joy of being a huge cliché. 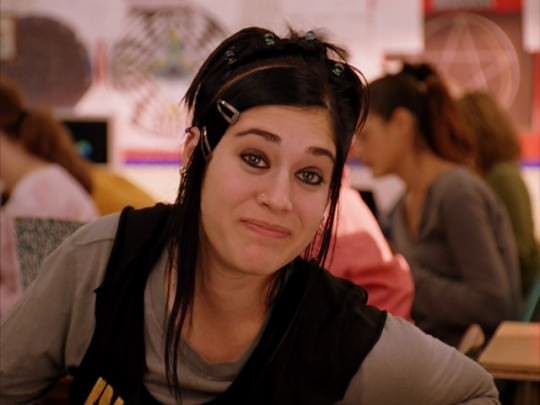 Friends: the life of a feminist is a hard one. I—perhaps like you!—am constantly overthrowing the patriarchy (otherwise known as “the reason dudes are in charge of all the things, and also tend to think dudes are better than ladies, which is stupid”) and whatnot, primarily by complaining about TV commercials and song lyrics and movies. Oh, sure, the commercials/songs/movies are already written, and millions of dollars have already been poured into making them culturally ubiquitous, but what will happen to society if I DO NOT POINT OUT THAT THEY ARE SEXIST, preferably in the course of perfectly normal conversations with people who’ve worked all day and just want to relax a little? Anarchy, most likely. Or more patriarchy. I can’t decide, but I’m betting the patriarchy thing is right. Indeed, I cannot relax for even a moment.

And I especially cannot relax when I sit down to watch a movie or a TV show all by myself. What if there’s patriarchy in it! Just sitting there, dominating women’s lives and narrowing our options in life, waiting to be exposed! I need strong, admirable, fully rounded female characters with which to identify, or else my whole leisure time is going to go straight down the male-dominated drain.

But guess what. I found one! I found a female character in a mainstream film who actually speaks to my feminist soul, the real me, someone I can identify with, and who will save me from male domination. That character is Janis Ian, from Mean Girls.

OK, sure. Janis Ian is a joke—a parody of angry, alienated arty girls who are identified by their rage against the machine and their heavy hand with eyeliner. Janis’s attempts to better the female gender mostly involve being mean as hell to other girls. Even her name is an in-joke on Tina Fey’s part; she’s an unpopular teenage girl named after the songwriter who wrote the world’s most depressing song about being an unpopular teenage girl. (Liz Lemon, who is basically a grown-up and nerdier Janis, performs this song at karaoke in an episode of “30 Rock”—Fey has a lot to work through with regard to this song, apparently.)

But these grotesque exaggerations are exactly what make Janis real to me. I love Janis for the same reason I love the permanently, awkwardly self-righteous Britta Perry, or the sugar-high perma-optimist Leslie Knope. There are real Strong Female Characters that I’ve taken into my heart: no one can say no to Buffy Summers, or Kara Thrace from Battlestar Galactica. Although just naming Kara as a Strong Female Character forces me to acknowledge that my idea of “strong” is a surly alcoholic who gets yelled at all the time by her bosses, colossally screws up all her relationships with men, goes intermittently bonkers, and occasionally crashes her space plane on purpose. (JUST LIKE A MAN WOULD BE ABLE TO CRASH HIS SPACE PLANE WITHOUT HAVING TO EXPLAIN WHY HE IS SO “ANGRY”AND “COMPLICATED.”) My feelings about Kara are apparently very complicated, and I should probably deal with those at another time. But, as with Britta and Leslie and Janis, I love Kara Thrace for one reason: she’s flawed.

As a feminist, my job is to argue that women are people. And here’s the thing about people: in my experience, when you get to know them, they’re all pretty screwed up. At the very least, they’re imperfect. And I think our feminist characters ought to reflect that.

At its best, feminism argues against the impossible standards created by the patriarchy for women, standards none of us can ever live up to, and which keep all of us in a state of permanent insecurity. But at its worst, feminism can create impossibly high standards, which make us even more guilty when we fail them. We have to be strong and independent! But also sensitive and empathetic to the needs of others! And also in touch with our sexualities! But not dependent on our sex appeal and/or male approval! We must own and reclaim our vulnerabilities and femininities! But also, we must not be emotional or personal or frivolous or soft, you know, like girls are! We must love our bodies, even in a culture that works nonstop to make us hate them! We must also love other women, even in a culture where women are raised to compete with and distrust one another! And we must love feminism! All the time! Even though we are exhausted now! From trying to live up to it! And, most important: we can never, ever, ever be wrong.

Which is why it’s a comfort to me that Community’s Britta Perry, who is genuinely interested in being the best she can be and making the world better as the result of her actions, is wrong about everything, to the point that her friends use the verb “to Britta” to mean “screw something up.” Or that Parks and Recreation’s Leslie Knope—who is actually much more successful and effective than Britta—is driven by her sheer manic enthusiasm into humiliating situation after humiliating situation. If she’s not successfully running a campaign for city council, she’s trying to take down a park-TP’ing 14-year-old whom she views as a dangerous terrorist. Or that Janis’s righteous fury is based mostly on the fact that Regina George was her best friend, until she got popular. All of these people are imperfect. And they’re wrong a lot of the time. But they’re still right a lot of the time, too, and we can still like them, because that’s how humans work.

There are a lot of obnoxious, reductive, wrong straw feminists in pop culture, too. Even Veronica Mars, which had a perfectly feminist title character—smart, self-possessed, funny, not about to get pushed around, spending much of the first two seasons specifically fighting class prejudice and sexual assault—felt the need to introduce a tribe of hairy-armpitted man-haters in its final season. (Maybe just so we knew that Veronica was a strong woman, but not one of those, you know? Smart, principled, strong women should be imaginary and not actually devoted to a real-life cause that might actually make things better in the real world, nudge, hint, et cetera?) But the good-hearted parodies and jokes, the women who are drawn with a broad brush and a generous spirit, are just great.

At least, they are to me. I spend my entire day doing serious work for the benefit of all womanity. I am a serious person. I take myself seriously. I need to be able to laugh at myself—I think all people do—for at least 30 minutes at a time. Men have been laughing at portrayals of other men, without feeling inherently bad about What This Says About Dudes, for centuries. If I don’t get to do the same, the patriarchy wins—no joke. ♦