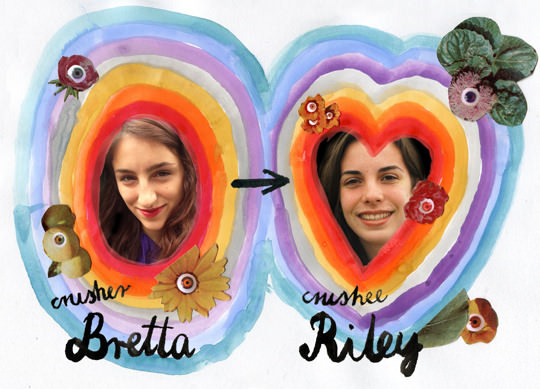 They started out as rivals, but Bretta and Riley, both 15, are now BFFs who run around Seattle together eating grass and talking about pooping.

Riley and I met in third grade. At first, we hated each other. We had to make a bar graph to show how much we loved different things. I looked over at hers, and I decided to do what she did. When we presented them, she got really mad at me for copying. Somehow we became best friends.

Riley has always been really adventurous, and she’s a great friend, because she’s incredibly accepting, but at the same time she encourages people to be better than they are. We recently got in a huge fight, and we didn’t speak for almost two months. But we wrote really long letters to each other explaining all of our feelings, and our friendship has a much better foundation now. We go to art classes together and watch weird ’80s cartoons. I’m generally crazy emotional, and I obsess over things, but Riley helps me relax and realize that things will be OK.

ROOKIE: Tell me more about the controversy over the graph?

BRETTA [crusher]: We had to make a graph to chart how much we loved certain things, like school and activities and stuff, and there was a top line that represented the most you could love a particular thing, and Riley had drawn up to and over it for “animals.” I thought that was a really good idea, so I did it too, but I just played it off like it was my own idea.

So how did you become friends from there?

I think we kind of realized that we were too similar not to be friends. We were both really big tomboys. We loved running around, and eating grass, and getting into leaf fights. I remember one time, we had this substitute teacher, and I held the door open for her, and she was just like, “Thank you, young man.” I was devastated. I ran to Riley and said, “The teacher thinks I’m a boy!” And she was like, “Don’t worry, it happens to me too.”

I know copying is supposed to be a sign of flattery, but it can also be really annoying when you’re trying to establish your individuality. Do either of you tend to be possessive about your interests?

No. We’re definitely proud of what we’re into, and we love sharing it with people. Once one of us gets into something, it floats off to the other one. I used to be really into drawing, and then Riley started doing it. Now she’s an amazing artist.

Are you ever competitive with each other?

We’ve definitely had moments where we’ve gotten really competitive. Art used to be the thing that came naturally to me, and when she started getting way better than me, I was really, really jealous. I was like, “Oh my god, I’m never going to paint again.” But over time, she helped me realize that it doesn’t matter, and I’m glad for how successful she’s been. Now, we spend whole days painting together and it’s great.

Did you find something else that you enjoy more?

Yeah, it’s kind of nerdy, but I really like studying psychology, and that was something that Riley had been into. She knew that I was feeling bad about her art skills, and she had this gigantic psychology textbook, the DSM-IV, and she gave it to me as a peace offering. It really meant a lot to me.

What’s the most interesting psychological thing you’ve learned so far?

Probably the Stanford Prison Experiment conducted by Philip Zimbardo. He told these guys they were going to be put in a fake prison, and they knew it was fake, but after a couple of days, the guys who were assigned to be guards started acting really cruel and the prisoners started riots, and some of them had to be reminded that it was an experiment. That freaked me out.

You said that you and Riley had a big fight. Can you say what it was about?

It was last April, right after my first big breakup. I couldn’t really get over it, but I also didn’t want to talk about it. I was being really self-centered, and she kind of felt like I was pushing her emotions to the side. So she confronted me about it, and I was so hurt. I was like, “How could you think I don’t care about you?” And we didn’t talk for a really long time. We sat at the same science table with another one of our friends, so it was really awkward.

That sounds stressful. I always find that past gets dredged up in these type of arguments.

Yeah, all the problems that we had boiled over. I think we kind of needed a break from each other. We did, and do, spend all of our time together, which isn’t a bad thing. But when we weren’t saying things that we felt, it kind of got out of control.

How did you get over it?

After two months, I went up to her after school and was just like “Riley, can we talk?” And we instantly fell into each other’s arms and started crying. It was such a great moment. It was one of the best things that happened to me in the past couple of years. We wrote each other these letters expressing every feeling we’ve ever felt for each other. And we talked about it, and we both decided that maybe it would be awkward after the fight, but we wanted to be best friends again.

Do you guys have any inside jokes?

I’m, like, six feet tall, and she’s really short, so we always do this thing where I carry her around like a baby. But it’s weird, because she’s almost like a mother figure to me. 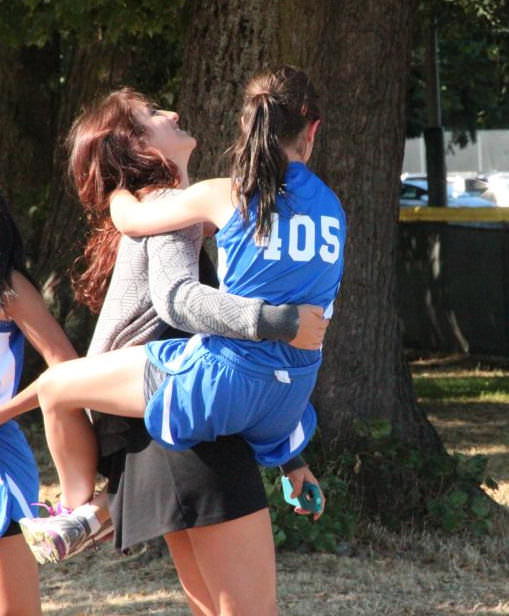 She has a lot of really weird things about her. Either the fact that she has an intense love of spandex, or that dancing is her favorite mode of transportation in my house. Or maybe her love of Tuvan throat-singing. You should ask her about Huun-Huur-Tu.

ROOKIE: So how angry were you that Bretta had copied you?

Riley [crushee]: I was like, “I’m never talking to this girl again. She’s awful.” But then I remember thinking one day: I don’t know why we’re not friends.

Bretta says that you consoled her once when a teacher mistook her for a boy, and that you told her the same thing happened to you. Was that true, or were you just trying to be nice?

I have never heard this story before, which is crazy! It is very, very possible that it happened, but I have no distinct memory of it.

So did Bretta inspire you to take up art?

Yeah, actually, because suddenly I had this other person who was doing art, and I had something to compare myself against. It’s not like I wanted to be better than her. I wanted to participate and somehow build our friendship through doing art.

She says that you’re much better than she is now, and that she used to be jealous of your talent. Did it make you self-conscious to pursue something when you knew that it bothered her?

Definitely. It worried me, because we’d be hanging out and somebody would praise me, and I’d be like, “Stop talking! You’re going to make her feel bad.” Bretta’s a really great artist. I don’t think she gives herself enough credit. But we have a lot of history like this. In fourth grade, she said she was going to learn guitar, and I thought, Oh, that sounds like a good idea, and then I learned guitar. She said it, I did it, but now she does it too, and she’s much better than I am.

From your perspective, what led to your big fight?

Well, she probably blamed herself, but it was definitely all my fault. I felt like she was really self-involved, but I was also going through my own stuff. I’m trying to figure out how to explain this…I usually try to take care with other people, and try to help them with their problems, and since we’re really close, I was probably feeling the brunt of her issues, but I was not in a good place to deal with that. And I completely exploded.

What was it like to go to school every day for two months and not speak to her?

Honestly, it was one of the worst experiences of my life. There was a lot of going into bathrooms to cry.

It sounds like you guys really cleared the air. Are you glad that the fight happened, in retrospect?

I regret it, but at the same time, it’s a good thing that it happened. I feel like we understand more things about each other, and with us getting older and our lives getting more complicated, that’s definitely a good thing.

I was told to ask about your favorite throat-singing group?

I honestly know of only one. So my mom—she’s not a hippie, but she has a lot of hippie remnants left over in her life. So this is something that I listened to when I was younger, and I only recently rediscovered it. And it was so weird, I couldn’t sing the songs, but I remembered the tune. I got into it. The throat-singing tends to mimic sounds from nature, so they’ll have songs that sound like horse footsteps or songs that mimic wind going over the plains. I definitely connect to the ones that are more wind-based, or sound like storms.

What’s the weirdest thing about Bretta?

There’s a lot of weird stuff about Bretta. She’s very OK with nudity, and also pooping and peeing. She loves to talk about that. ♦

To nominate your most wonderful friend for a future Friend Crush, please send ONE email with both of your names, ages, and pictures, and a paragraph or two explaining what makes her so special, to [email protected], and write Friend Crush in the subject line.