The period I had so desperately wanted not only arrived, it arrived with force. 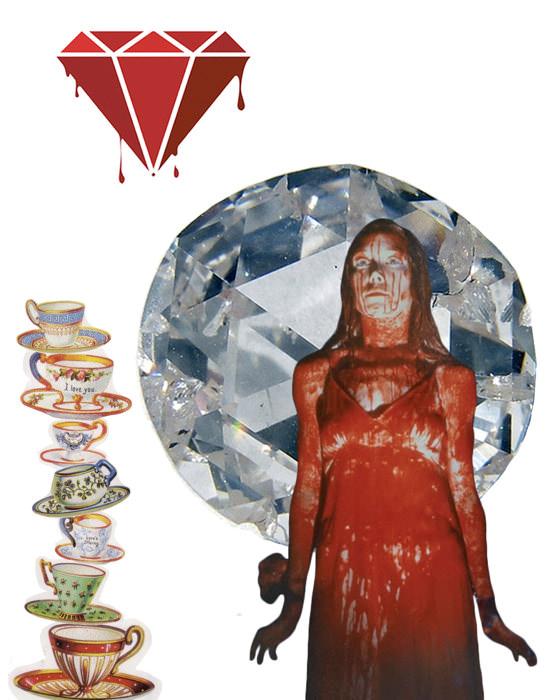 I got my first period the day before my 11th birthday. I’d been lying about it for months, saying that it had already come, because one of the other girls in my very small middle school class got her period before I did, and I was jealous. Menstruating seemed so adult, so womanly, that it was downright sexy. But there it was, finally! My mother had an elegant friend who had taken her daughter for tea at the Plaza to celebrate her first period, and so we did that, too. Instead of feeling like Eloise—who was, after all, a child—I felt like a movie star.

In high school, when other girls began to bleed unexpectedly, they always came to me, knowing that I had a stash of tampons on my person that would last most women several months. Super plus tampons, super tampons, regular tampons, bulky pads, panty-liners, Advil. I had it all. The period I had so desperately wanted had not only arrived, it had arrived with force. The folded-paper instruction manual that came with each enormous box of tampons claimed that a normal menstrual flow was about two ounces of blood per month. I felt like I lost that much in an hour. Every trip to the doctor ended with her telling me that I was terribly anemic, which I knew. How could I not be? The blood was leaving my body at such a high rate that I was surprised there was any left for her to take.

Once, one of my male friends’ younger sisters came up to me in the lobby of our school. She was a freshman, and I was a senior. “I’ve had a tampon in for two days,” she said. “I forgot about it.” She looked at me for advice, perhaps because I was older and wiser, but also, I presume, because she knew I was some kind of menstrual oracle. I couldn’t imagine leaving a tampon in for more than two hours, let alone two days. My own period was already so bad—the cramps, the bleeding—that I’d gone on the birth control pill to try to beat it into submission.

It was the end of high school by the time I realized that bleeding every month sucked, and it quickly went from “sucked” to “actually ruining my life.” The birth control pills worked for a while—my cramps improved, but the bleeding was still heavy. Every few months, my college roommate came home with a new box of Tampax slenders, tampons that I could make expand just by looking at them. Meanwhile, I doubled up on pads and supers, and bled through onto my sheets anyway, easily going through one large box of supplies during every period, if not more. I’d had some sporty-ish friends, the kind of people who wanted to play intramural softball or pick-up basketball, or go camping, during that time of the month, and my first thought was always: how can you do anything that is so far away from a bathroom? How can you be so cavalier? My period lasted a solid week, if not more, heavy for the first few days, and heavier than most people’s normal periods even on my lightest days. I knew every single bathroom on my college campus intimately.

As I got older, I’d look at my schedule and cringe when I saw that I was due for my period, knowing how much harder it will make everything I’m supposed to do. (Taking the subway to work for 40 minutes? Impossible. I can’t be away from a bathroom for that long.) I’d fill my purse with pills and supplies, wear my oldest, darkest underwear, and hope for the best. The feeling is like boarding an airplane when you know there’s going to be extreme turbulence. The ride is going to be bumpy, but you have no choice but to get on board.

A couple of years ago, I went off the pill for the first time in over a decade. Though intellectually I understood that the hormones in the pills had been controlling my period, it was nonetheless a shock to see the change. My period went from heavy-but-not-completely-insane to the hallway scene in The Shining. And because I realized how much garbage I was producing every month—all those applicators, all those cardboard boxes, all those little plastic sleeves—I’d switched to a hippie option, the DivaCup, which my friends (and my pals here at Rookie) swore by. One friend told me it was so great, she’d empty it once or twice a day, and that was it! She practically had stars in her eyes. I was sold.

You know the phrase “my cup runneth over”? Not to be disgusting, but my cup ranneth over every half hour. I was traveling a lot at the time, with the band I work for and doing research for my novel, and sometimes I would be in transit all day long, timing my bathroom-stop requests as far apart as I could, waiting until the last second to board airplanes, running through gas stations because I didn’t want to ruin one of only a few dresses in my suitcase. I sprinted into filthy bathrooms, into Porta-Potties, into places I would usually avoid like the plague. Waiting for a clean spot (ideally, my own bathroom) just wasn’t an option.

The blood was everywhere. It was on my clothes, on my skin, on the toilet bowl, on the bathroom floor. I couldn’t control it, not with Advil or with expensive pills from my gynecologist that were supposed to stanch my flow. Or rather, the pills worked, they cut the bleeding by a third on the heaviest days, but a third of a monsoon is still a monsoon. I went for dinner at a friend’s house and sat on her beautiful vintage chaise lounge, because she asked me to, because she knew I’d love it, and then did nothing but think about the possibility of ruining it all night long. I left work early, I left parties early, and cancelled plans left and right. On my heaviest days, I had half an hour between visits to the bathroom, if I was lucky. I got no sleep, even with an old towel tucked underneath my body, just in case. Each period lasted more than a week, sometimes two, and left me feeling like I’d been through a war. Even though most people with functional ovaries between the ages of approximately 12 and 45 menstruates, most of them don’t have to worry about the shame of having an accident, the weird looks from friends and co-workers when you excuse yourself every 30 minutes, and all that blood.

People loved to give advice. One friend recommended I try acupuncture, which I’d done before and had helped with other physical ailments. I took herbal remedies, and of course iron, so much iron. The acupuncture was fine, until I bled through my clothes on the table, leaving a small round stain behind, and then drove myself home crying, knowing I wouldn’t make it home fast enough to avoid another accident.

After a year of this, I finally went to a new doctor. What took me so long, I have no idea. I think I always assumed that this was just my cross to bear, that nothing could be done, that it wasn’t that bad. Never mind that I had never—never—met anyone with periods like mine. Because I’d always been healthy, it truly never occurred to me that there could be any actual problem. It took visits to several specialists, but finally, after months (which, of course, meant more periods) my new doctor (also known as my queen, my goddess, my deliverer from evil) discovered the gigantic colony of fibroids that had been wreaking havoc on my uterus. My doctor explained them to me like this: a normal uterus squeezes itself every month, contracting to rid itself of its lining. She squeezed her fist together, the way you’d squeeze a lemon. When you have a fibroid, a non-cancerous cyst, it can interfere with normal uterine contractions, and so the bleeding can’t regulate itself—the uterus wants to keep squeezing and squeezing, shedding more and more blood. This summer, I had two surgeries to remove them—one giant monster fibroid and then several little baby-monster fibroids, too many to count, like Gremlins.

The surgeries weren’t bad—I got to go home afterward—and I was pretty much back to normal within a week. I was lucky in this regard—some people have far more invasive surgeries, depending on the position of the fibroid. Friends sent me boxes of snacks and comic books and flowers, and my husband took excellent care of me, sweetly hopeful that the worst was behind us. My only regret is that I waited so long to figure out what was wrong. I think it’s a good lesson about knowing your own body—if something seems like it’s fucked up, it probably is. I don’t think I’ll ever be reluctant to call a doctor again.

There are, of course, reasons why having your period is a good thing. I would never have gone on those pills that reduce your period to four times a year, because that just seems weird to me. The clockwork regularity of my period is comforting to me—it’s satisfying to know that my body’s doing its thing just fine. Having your period is also a great way to know that you’re not pregnant, which can be very reassuring. For obvious reasons, I’m way, way past the point of seeing any charm whatsoever in my monthly visitor, but I know that it’s a minor inconvenience for most people. I wish that I still felt as excited about that particular part of becoming an adult as I did when I was in junior high school.

Though it’s still early to tell for sure, my life seems to have improved. I’ve had one fairly normal period. I still know all the best public bathrooms in the city (if you’re in downtown Manhattan, forget the Apple Store, and go to Room & Board, trust me). I still carry enough feminine products to act as a dam in a pinch, though with the DivaCup now able to handle my flow, I need them more for my own peace of mind. The fibroids will almost certainly grow back, so my reprieve might be short-lived, but I’m happy to take what I can get. It was so bad for so long, I don’t quite believe that the blood is gone forever. Every month, I’ll cross my fingers and hope for the best, and if it gets really debilitating again, I won’t wait another month before going back to the doctor. I’m not going to join any swim teams in the meantime, or hike up Mount Kilimanjaro, but who knows—I might have a whole three weeks of freedom. It’s a start. ♦