A Guide to Ghost Hunting 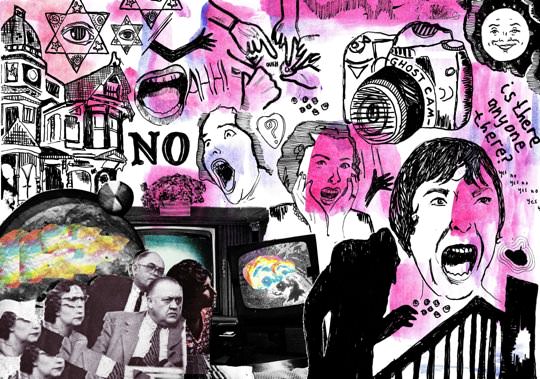 October is the best month to get really and truly scared. Sure, you could go on some lame hayride and get chased by “ghosts” in period clothing and white makeup—or you could look for a real ghost. ’Tis the season for ghost hunting, because even your skeptical friends can be convinced to indulge on the grounds that it makes for some harmless Halloween fun.

I’ve always been fascinated by ghosts and creepy phenomena. As a child, I firmly believed that there was more to the world than what was immediately visible—and I desperately wanted to be able to truthfully say, “I see dead people.” Many years later, I can say…I’ve seen weird shit. I can’t say for sure whether I believe in ghosts, but I’ve experienced some things I can’t explain.

I love a mystery, and I’m fascinated by dark and morbid stories—the tragic deaths, the haunted houses, the legends that survive for generations. And most of all, I relish the opportunity: ghosts can be anywhere. Everyone has a chance to find one.

I don’t do a ton of ghost hunting myself. I don’t have to—most of the crazy things I’ve seen were in my own house. But after years of meticulous internet research and ghost-hunting reality shows, I know a thing or two about how to go about it. Here’s a primer to help you get started:

You want to pick a place that’s known for weird happenings, whether it’s a house, a cemetery, or a historic location. Even if you live in the country and don’t have a handy brochure of haunted locations, you’re still certain to have a few local legends. In my rural county alone, we have a haunted bridge, a haunted opera house, and a haunted intersection. If you’re in a city, your local haunted places are probably well known, and perhaps they are featured in year-round ghost tours.

The tours can be cheesy, but you never know what you’ll see. My first and best tour was in Fredericksburg, Virginia, a town where the walls still have holes from Civil War cannons. We visited an old church whose history I no longer remember, but I’ll never forget how, when the guide spoke, the closed doors on the old-fashioned box pew quietly swung open behind us. And every picture I took of that church was full of orbs, each one with a pinkish light cutting off a corner (see below). (And yes, I know there are a ton of scientific explanations for photographic anomalies. More on that later.) 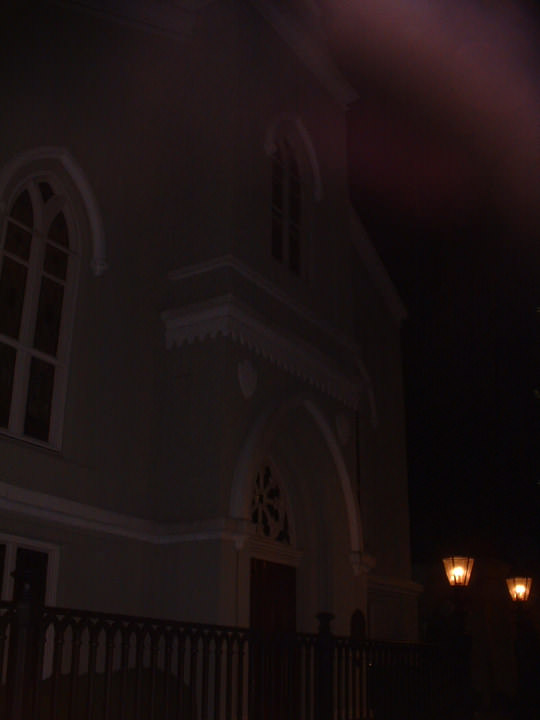 A ghost by the church. Or dust particles.

Was there an unsolved crime or tragic disaster in your area? Those ghosts might have the incentive to communicate. Now, if this is a recent tragedy, or if it happened on private property, be respectful of the living—if someone who knew the deceased could conceivably walk into your ghost hunt, don’t do it. But the sites of unfortunate events are a reasonably good place to begin your search. It seems to be understood, from horror movies and folklore, that souls tend to hang around if they have suffered sudden, violent deaths, or if they have unfinished business (like identifying their murderer).

Sometimes ghosts can be found even closer to home—alarmingly close. When I was seven years old, we moved into a new house with a tragic backstory: the first woman to live there had died in the basement, fighting an electrical fire. I just knew she had to be haunting the place, and it was confirmed at a sleepover for my birthday in first grade. A gaggle of girls were sleeping in my living room, which has several large windows overlooking the gardens. I was one of the first to fall asleep, but some time in the middle of the night, my friends woke me up in a panic, saying that there was someone in the window. They pointed at a round shape looking in, a small head with its chin resting on the windowsill. “It’s just a shadow,” I grumbled. Then it waved at us in a creepy, disjointed motion, like its arm was passing behind its head. There was screaming and running, but the shadow-person seemed content to stare and wave, and eventually we were able to close the curtains and go back to sleep.

Of course, we didn’t get a good look. All I know is that the shape and movement of that shadow could not have been from a living person, and there was nothing in front of the window that could have accounted for it. But ever since that day, I’ve always kept my eyes—and my mind—open.

Learn more about the ghost or haunting, and come up with a game plan.

Are there any specific legends attached to this place? Does the ghost show up at a certain time, or under some strangely specific condition? At the opera house that I mentioned above, the story in my hometown was that the ghost would show herself only to people with the same last name as the original owners: Kline. But the staff soon discovered that patrons with the last name Small were seeing the ghost too! (The German word klein means small.)

Is the location on private property? Keep in mind that a lot of cemeteries are closed at night. Don’t let your adventure end with you getting arrested (unless that’s a risk you are willing to take in pursuit of THE TRUTH). You can still encounter ghostly activity during normal business hours. Case in point: there’s a Toys “R” Us in Sunnyvale, California, that’s famously haunted by a ghost named Johnson, who used to be a ranch hand on the property. If you can find a ghost in a Toys “R” Us, you can find one anywhere.

If you bring only one thing, let it be a camera. You’ll want your highest-resolution one one (i.e., not your cell phone), so you won’t have to try to pick ghosts out of pixels later. If you want to go a step further, bring something else to record video or sound. A tape recorder is great if you suspect your house is haunted—leave it on overnight in an empty room, and see if it picks up any voices or other sounds that shouldn’t be there. And if you want to get really fancy, grab some sort of room thermometer to test for cold spots. Professionals have ridiculously expensive equipment for this. Until you commit to ghost hunting full time, I think a simple thermometer is worth a shot. I’ve never tried anything other than a camera, partly because recording technology wasn’t as user-friendly back in the early naughts, when I lived in that haunted house, but mostly because I didn’t think I’d ever sleep again if I actually heard a ghost’s voice IN MY HOUSE.

If you do bring a tape recorder, keep it on the whole time—you never know when a ghost might decide to join in on the conversation! Ghostly sound recordings are called “electronic voice phenomena,” or EVP. Most of the ones I’ve heard online sound like someone’s reading too much into static, but sometimes you get some spooky voices. Try asking your ghost some friendly questions, like their name or how they died, and then play back the sound later to see if you hear any answers. If you’re going to try capturing EVPs, this page has some good tips.

Not every ghost photograph is going to be of a transparent person casually hanging out in your vacation photo. But you might find orbs, lights, shadows, or other strange anomalies.

A lot of “ghost photos” have very reasonable explanations: reflections, the camera’s flash, someone’s thumb in front of the lens. The right-hand column on this site has a good list of explanations for photo anomalies. The orbs in the photos I took at that church were probably floating dust particles, which is disappointing. You know you’ve got a good photo when no one can tell you why it’s not real.

There is no one formula for ghost hunting. Mostly, you just have to be observant. Everyone wants to see floating furniture and old-fashioned ladies in flowing dresses, but most hauntings are less dramatic. Which is a good thing, because moving furniture tends to mean you’ve got a poltergeist, and we all know how that goes.

Listen for weird sounds. I don’t put much stock in footsteps or creaking—all buildings make those noises. But some sounds are harder to explain. At my house, we would sometimes hear a crashing noise from our kitchen, but when we investigated, nothing would be out of place. Once, one of my family members heard voices coming from the living room in the middle of the night, while everyone was fast asleep.

In my experience, weird things happen in reflective surfaces, so keep an eye on mirrors, shiny screens, and windows. When you take pictures of these things, keep your flash off. I’ve never seen anything in a mirror (knock on wood—I hate scary mirror stories). The freakiest thing I’ve seen was a reflection in my sliding glass door. When I was a teenager, I walked out of a hallway entrance facing the door that opened to our patio. While I was standing RIGHT BY THE DOOR, I saw a reflection that I thought was my mother, standing in the kitchen. I turned around to say hi, and no one was there. I quickly turned back, and there was a clear reflection of a brunette woman wearing white. I looked back and forth several times, but no matter how often I checked, the only people in the room were me (in blue) and the reflection. Then I ran out of there to find my mother, who turned out to be in a completely different part of the house, wearing bright pink. Despite how much I love ghosts in theory, I was TERRIFIED. It’s one thing to go out looking for ghosts, prepared with friends and tools, but when something seemingly impossible happens in your own home, with no one else around? I eventually recovered and started basking in the knowledge that I finally had a true ghost story, but to this day, when I’m visiting my parents and have to walk past that door alone, I avert my eyes.

It may be tempting to bring the ghost to you rather than going to find it. Do so at your own risk. Many ghost hunters will tell you not to use a Ouija board to make contact, because you’re opening a door to a psychic plane, and you don’t know what’s going to come through. Look what happened here. In my opinion, participants are probably subconsciously moving the planchette anyway, so it’s a suspect tool.

I recommend that you always go ghost hunting with friends. This way, if you find a ghost, you’ll have someone to back up your story. And having other people around will help you feel safe. That said, good luck, have fun, and remember to watch out for what might be behind you. Right. This. Very. Minute. ♦