Stuffing Myself With Immanence

The lengths we go to to avoid being free. 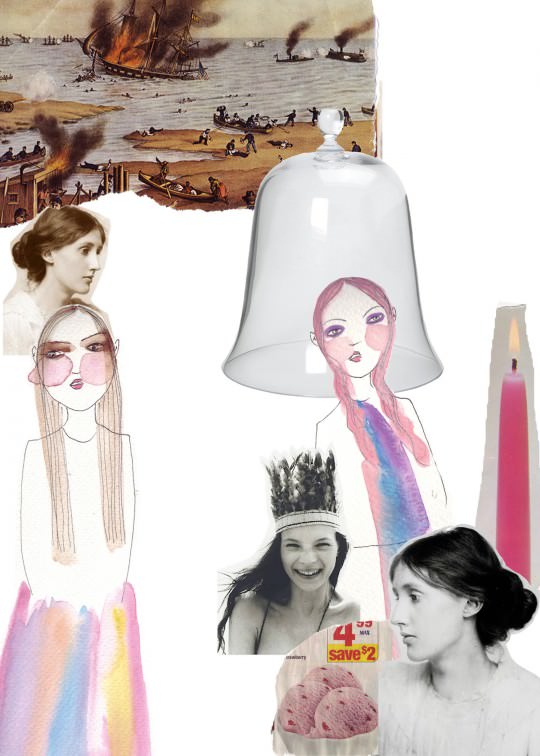 I was laughing when I caught myself playing with my shadow. I was running, and in the long afternoon my shadow looked really good. My upper arms looked wrung out and my shoulders were hunched in that skinny way. I was in jogging stance, my forearms raised and fists balled up, and the position of everything and of the sun made my shadow reveal that she had only two half-arms. And when I caught myself, I was playing with that form—shifting my body to perfect the amputations, pausing midstride to cut off a leg—and I was laughing and full with triumph.

What was I doing. I should have been thinking, or at least studying the sky. So I looked at the sky. Still big. Hedges. McMansions. Thump thumpthump: sneakers smack against the concrete. The harder the thump the more calories burned per thump.

I placed myself in isolation this summer in my parents’ empty house on the South Fork of Long Island in order to get serious. I was also working full-time at a clothing boutique, the kind where it is just me in a room full of mirrors and occasionally a super-skinny 55-year-old would walk in and sneer if I deigned to ask whether she’d like to try it on. (Apparently, when she holds it out like that, one is simply supposed to go fetch and ring it up—why bother trying on 500 dollars’ worth of cotton?) Anyhow. When I was not fetching, I was placed in front of my laptop, getting serious.

Thump thumpthump. Give in: walk down the hall, up the stairs, down another hall, and right up to the full-length mirror. Bend over. Slip my hands from behind my thighs and pull the meat back. Grab hold of the muffin top and yank it out of sight. Peel away the teacher’s flab. The habit becomes disgustingly obsessive—I begin to do it what, I don’t know, this is awful to admit, every 15 minutes? Ten?

What did he once tell me? If a woman spent half the time in front of the mirror, she could become fluent in Latin, and French, or something. Virginia Woolf?

This is not going to become an article on that kind of hunger.

I am not even hungry. I’ll never be ballsy enough for anorexia—I eat; I eat just like a regular person. In fact, aside from the briefest of adolescent flings with bulimia, I probably ate far more than the average female because I was so hung up on not becoming one of those “stupid anorexic types”; I got off on proving my difference via stuffing my face in front of lovers.

I am not even hungry; I am not a stupid girl. I know what stupid girls look like. I had a loudly anorexic roommate in boarding school who drooled over her homepage, the Cold Stone Creamery website. (Kate Moss was her desktop.) She and her posse would parade around campus trading starvation tips and gnawing dried seaweed: she was a stupid girl. We would laugh at her. I would laugh, before excusing myself to go shimmy my fingers down to heave up Diet Peach Snapple Iced Tea. Whatever. I went to college. I discovered philosophy. Well…I met truly intelligent girls who were super into higher, intelligent things; they were beautiful, and thin, but their bodies seemed the design of the luck of the draw.

I ate, and read the assigned portions of Simone de Beauvoir’s The Second Sex from a used copy I got from a friend of a friend, a well-known misogynist. I remembered his comments more than I remembered the text: he wrote ugh, ugh, hahaha ha ha ha, wtf, et cetera, in the margins. I ate, and refused to exercise, because only weak girls who thought about their bodies instead of higher things did that; I continued to think about my body. I would sneak peeks of her; I would hate her; I would focus in on a single feature and feel all right—but this is precisely what the duped woman does: looks in the mirror and believes she has discovered herself; even the women who believe themselves to be ugly do that. The French philosopher and Christian mystic Simone Weil said that “a beautiful woman looking at her image in the mirror may very well believe the image is herself. An ugly woman knows it is not.” But how can we trust Weil on the matter? Anorexia killed the mystic!

The other Simone knows better. De Beauvoir defines three attitudes that women take on to avoid the unknown depths/heights of their own freedom: the Narcissist, the Woman in Love, and the Mystic. All three of these figures submerge themselves in objects that take the place of true freedom: the Narcissist in herself, the Woman in Love in her beloved, and the Mystic in God.

In the section on the Narcissist, de Beauvoir explains the magic of the mirror:

It is above all in woman that the reflection allows itself to be assimilated to the self. Male beauty is a sign of transcendence, that of woman has the passivity of immanence: the latter alone is made to arrest man’s gaze and can thus be caught in the immobile trap of the mirror’s silvering; man who feels and wants himself to be activity and subjectivity does not recognize himself in his immobile image…while the woman, knowing she is and making herself object, really believes she is seeing herself in the mirror: passive and given, the reflection is a thing like herself…

Male beauty is a sign of transcendence, that of woman has the passivity of immanence… According to de Beauvoir, males understand their relationship to the world as one of transcendence—men are taught to act upon the world, to shape and create the world around them. The male’s idea of who he “is” is deeply enmeshed in this understanding—the male understands himself as a creator. (Yes, these are all sweeping generalizations, but de Beauvoir was working out why, in 1949, women did not feel equal with men.) Women, on the other hand, come to understand the world in its immanence. Immanence means existing within—in other words, they see the world as it already exists, and they are one of the things existing in it, with no power to control it.

So when de Beauvoir says that women live in immanence, she means that when a woman asks herself, Who am I? she does not answer, I am a person who will act upon the world and will be changed through my actions accordingly. Instead, she looks at herself as she is (her body, her preferences, her emotions) and thinks that these qualities define who she really “is.” This belief, that you are who you already “are” and you will always be that way, is misguided and rather tragic. It makes it so that when you ask yourself, Who am I? you just look at yourself over and over, and it leads you to a lot of navel-gazing that takes up your time so you can’t actually make stuff and have an influence on the world.