Being diagnosed with mental illness was scary, but it was what I needed to get well.

She Was Just a Wish 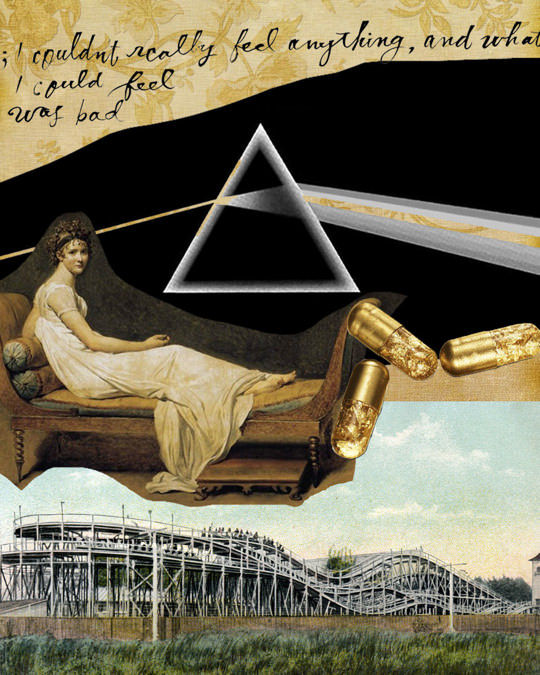 The week after my 30th birthday, my best friend had me committed to a psych ward. Two days later, I had emerged with a life-changing diagnosis. The hard part hadn’t even started yet.

I deserved to be committed. I needed it. For a long time, I had been in a dark, painful mood, a mood that had steadily transitioned into my personality. When I felt anger, I felt it so intensely that it took over my whole body. I would go to the grocery store with a carefully composed list, walk through the aisles fuming, and then leave so furious that I completely forgot to buy any food. The anger—which could have been over anything from a fight with a friend to a political issue—often lasted for weeks. Also, I was tired—always, always bone-tired. I was so exhausted that it was a huge physical effort to sit at my desk and type, except for rare weeks of nonstop energy in which I came up with an idea, worked to make it happen, watched it happen, and then treated it like a toy I’d gotten bored with after several days. I could always get my paying work done, but anything outside of that was subject to my ever-fluctuating energy levels. My emotions seemed remote, flat, hard to discern, as if I were trying to see them through dirty glass. I couldn’t really feel anything, and what I could feel was bad. I pulled away from people. I was determined not to trust anyone. I was depressed, in other words, except for those strangely productive weeks and long, terrifying rushes of anger.

About a month before my birthday, this took a bizarre turn. Not only did I distrust people, I suspected many of them were only pretending to be my friends. I was convinced they were plotting against me. And I realized something: I deserved it. I was acting like a terrible monster, even if I didn’t know exactly why. I would find a friend with whom I’d had a fight, for example, and apologize for calling them a name that they had in fact called me. I was saying I’d done or said things that never happened. But I wasn’t entirely sure that I hadn’t slapped a man with whom I’d had an argument about WikiLeaks. (I hadn’t, people were there, they saw an absence of slapping.) But if I hadn’t, how could I know that any of my other memories were valid? The real and the imaginary were starting to feel the same. I was sending people rambling Gchats talking about what a bad person I was, and if the conversation topic shifted, I couldn’t keep up. I seemed to be talking mostly to myself.

When my friend came over to my house, the night before I went in, she hadn’t seen me in a month. I hadn’t bathed in weeks. I was dressed in a mismatched, nonsensical collection of clothes I’d picked up off the floor. I had lost about 20 pounds; bones were sticking out of my face and wrists. (I had stopped eating.) People told me I couldn’t make eye contact. I also couldn’t speak above a whisper or in a complete sentence. I had been up for at least 24 hours, and I couldn’t sleep. I would lie down, then start back up again to wander around the apartment. My friend stayed up all night watching this, and in the morning she took me to the psych ward of a New York hospital that accepted walk-ins. Nurses took my blood pressure and asked us both a few questions about my behavior and thoughts. A doctor took my friend into a different room and asked her to describe what she’d seen of my behavior. Once they’d talked to her, they handed her my bag and my coat, and told her to leave. They told me I would be staying.

I’m describing this because I want you to see how it sneaked up on me. Mental illness is like this. It doesn’t always show up suddenly and dramatically. I had been diagnosed in the past with depression and generalized anxiety disorder, both of which were common illnesses, and which I thought explained my problems. I would have been insulted if you’d suggested I had anything more serious. I was just joyless, I was just angry, I was just lonely. I thought maybe I had chronic fatigue or something, but I didn’t see a reason to get it checked out. By the time I was unwashed, incoherent, and skeletal, I had gotten so used to being unhappy that I almost didn’t see the difference. (Note: if you start to feel bad for long periods of time, if your thought patterns or personality start to change in odd ways, go to a doctor. It could be a bad mood. It could also be something much more dangerous.)

What the doctors at the hospital finally decided was that I had bipolar II disorder, which is a scary diagnosis. It has a high suicide rate and can be very painful and destructive to your life if you don’t get it treated. It basically means cycling between phases of overconfidence and recklessness (and/or anger), and then deep shame when you crash down into depression and see the mess you’ve made. The diagnosis made sense of most of my worst times and emotions. My boyfriend had noticed phases where I couldn’t say no to anything, and then corresponding periods of isolation and darkness, where I could barely function socially. But before I could get this alarming news, I had to deal with the other scary thing, which was being in the hospital in the first place.

Since I had not checked myself in, my stay was marked as “involuntary.” The hospital would have one doctor give a potential diagnosis, then keep me for 24 hours of observation. After that, another doctor would look at me, and if he agreed that I needed to stay, they could keep me for up to 72 hours total, and then move me to a hospital for a longer stay if they thought it was advisable. My consent was not necessary for any of this, and I literally could not have left if I had wanted to. My entire future was in the hands of these strangers.

Let me tell you: if you already think people are monitoring you, if you’re already worried that people are plotting against you, being locked up against your will by people who want to monitor your thoughts feels like literally the worst thing that can ever possibly happen. It feels like all your fears are coming true. You are away from home, there is nothing to do, and strangers are dictating your every move—when you eat, what you eat, when you sleep, when you wake up, when you take a shower.

I was scared, I was homesick, and I was very, very angry. Imagine, if you will, a feminist blogger surrounded by men who tell her they don’t think she’s competent to make her own decisions. While I was there, several patients flipped out and yelled at the doctor. This was assumed to be a sign of their illness, but actually, it’s a pretty normal reaction. I wanted to yell for most of the time I was there.