Literally the Best Thing Ever: Shakespeare

He’s everywhere, in one way or another. 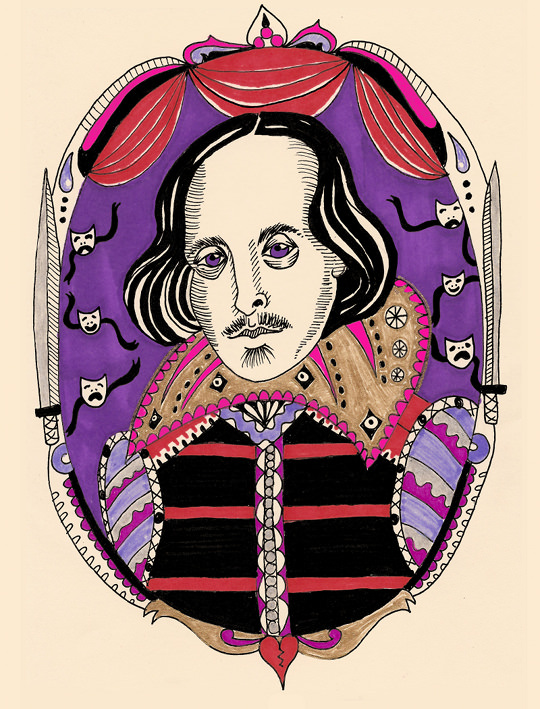 Everyone knows who William Shakespeare is, of course, because of his insanely huge and awesome body of work; but there’s surprisingly little concrete knowledge out there about the man himself, his actual life. He moved to London around 1586, but his plays didn’t appear on the city’s stages until 1592; scholars call the years in between his “lost years.” How fun.

Frankly, I love the mystery that surrounds Shakespeare. It’s so different from the cult of celebrity nowadays, where we consume all the minute life details of almost anyone. But for all his mystery, no one besides religious figures has made such a huge impact on our culture—Shakespeare’s work is second only to the Bible in terms of best-sellers. He let his writing do the talking.

Untangling the knots of the Shakespeare conspiracy theories, what we (almost definitely) know for sure is that William Shakespeare was baptized on April 26, 1564, in Stratford-Upon-Avon, England. Sorry, Italy—he may have loved your country enough to set many of his plays there, but we’re keeping him. But it’s remarkable that so many people from so many places would like to claim ownership of Shakespeare, to forge a connection with him. I do this too. Shakespeare and I share the same birth county and birth month (maybe even the same day—only his baptism date is recorded, and I like to think we share April 24).

When you grow up in England, Shakespeare is just one of those things you take for granted. You absorb his cultural significance from an early age, and you’re aware for as long as you can remember of his “greatness”—not just as a writer, but as a symbol and icon of English history. When you are young there are cartoons and Animated Tales to introduce you. You are taught a separate play each school year, and you tell yourself you can swallow and comprehend every monologue, every soliloquy, every extremely outdated sex joke. But you can’t—and that is a great thing. I’ve felt Shakespeare’s presence since I was little, and I will continue to learn more about and from his work until the day I die. One of the monologues in As You Like It reflects on “the seven ages” of development (infancy, childhood, the lover, the fighter, justice, old age, and death), and I see all those ages reflected in all of his plays and sonnets. A lot of people like to question the authorship of Shakespeare’s work; I think it’s because his words seem to know everything, more than any one person should. His words are able to reflect, with glimmering accuracy, every emotion and every age.

Shakespeare is everywhere, in one way or another. I continually find amazement in how his words can make ripples in every social and cultural context. This year there is the World Shakespeare Festival, which has directors and actors from around the world doing plays across the UK; in the past the Royal Shakespeare Company has staged his plays in all kinds of different languages. One year my family and I saw A Midsummer Night’s Dream spoken partly in Hindi. It was beautiful.

Some of my favorite art, music, and dance is based on Shakespeare. Not to mention the countless film adaptations, old and new. The teen versions are, of course, amazing.

Reading and watching Shakespeare today is proof that humans haven’t really changed since his time. He covers power, youth, love, and dying for love. Innuendos abound, as does genuinely funny and clever comedy. Sex has always been on everyone’s minds. People still kill one another—and themselves. Ophelia went mad, Lady Macbeth became obsessed with washing imaginary blood from her hands—what more could you possibly want?

My favorite character is the wise and hilarious Beatrice from Much Ado About Nothing, a woman who proclaims that she “would rather hear [her] dog bark at a crow than a man swear he loves [her].” There is nothing more satisfying than learning by heart Shakespeare’s one-liners. And nothing more dramatic nor heart-rending than the speeches in his tragedies. Delving into all of his characters and his plays, and noticing new things every time, watching words come alive off the page but be so old and having been spoken by so many other people through time, then having them be spoken by you, alone in your bedroom, feels like actual magic.

I believe that William Shakespeare gave the world all of those words, but in the end, does it really matter? He is more than just one man now, he is a whole world. All of his work gave voice to basic human emotions that resonated not only in 16th century England, but through time and throughout the whole world. I bet that even in deep space, Shakespeare has a fan club. As his friend Ben Jonson said, “He was not of an age, but for all time.” ♦