Fool me once. No, seriously, go ahead. 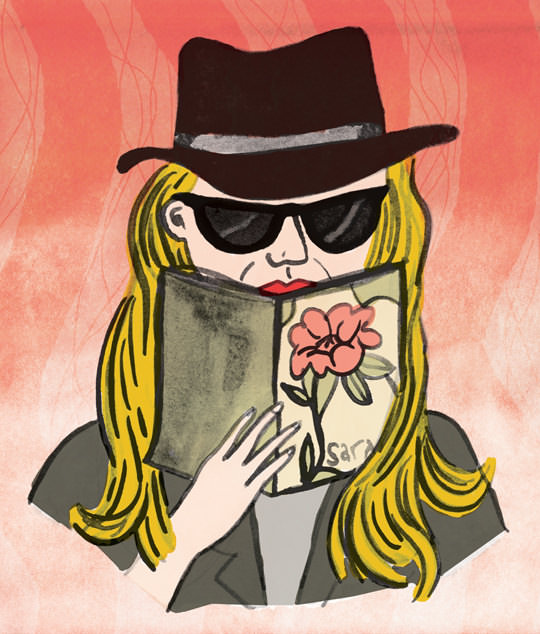 I love autobiographies. There’s something captivating and awesome about people mythologizing themselves, unspooling their histories as only they know them and then giving their lives over to the world in the form of art. To me, it’s the perfect combination of narcissism and romance and self-styled history.

Some favorite memoirs of mine are the badass astrophysicist/Rookie hero Neil deGrasse Tyson’s The Sky Is Not the Limit, Alison Bechdel’s Fun Home, and My First Five Husbands…, the literary masterpiece penned by Rue McClanahan (better known as Blanche Devereaux on The Golden Girls). But how would I feel if I found out that Tyson had made up his endlessly engrossing stories about growing up in the Bronx, or that Bechdel’s family never owned a funeral home, or that, God forbid, McClanahan had had not five but FOUR spouses over the course of her life? Would I have a right to feel angry or cheated that these people had forged their own stories? Or would I have to understand that all personal narratives are a matter of perspective and sometimes writers do something they call “embellishing,” which most people would define as “lying like a rug in order to make something more interesting than it actually is”?

There are different interpretations of what constitutes a literary hoax, but to me, it’s when writers plagiarize or fabricate their work, try to pass it off as true and very much their own, and aren’t caught right away. These fakers have existed for as long as people have been ambitious–take the “Donation of Constantine,” a text that was supposedly written by Constantine the Great and first surfaced between the years 750 and 850. It details parts of Constantine’s life, like his magical recovery from leprosy after being baptized by Pope Sylvester I. That sounds totally credible, huh? No. The text is a forgery, written by some trickster Greek or Roman looking to shake up the theological world. THOSE ANCIENT GREEKS AND ROMANS, ALWAYS YANKING THE OL’ CHAIN, AM I RIGHT?

This grand tradition of mucking up the truth has been carried on by many others to this day. Just last month, there were reports of a New Yorker writer who, in his book Imagine, straight-up invented things that Bob Dylan was supposed to have said, but didn’t. Accordingly, he was torn apart by the very serious literary community. In this case, I agree with those who denounced him. Bending the truth of people’s lives to suit your own project is a lazy, unethical, and horrid thing to do. But what happens when a writer doesn’t plagiarize anyone or fictionalize real people, when they’re telling their own “true” false story? Should we care? Who gets hurt? The feelings that result when we find out a beloved book ain’t exactly what it seems to be are so fascinating to me. Take the outrage of everyone from Oprah to your uncle when James Frey’s addiction memoir A Million Little Pieces turned out to be significantly fabricated. Many readers who had invested themselves in the story felt duped and betrayed. While I understand that it’s painful to identify with something only to discover that it’s a lie, let me play devil’s advocate: does it really matter, if it enlarged even one reader’s world, or made them feel less alone? Those are very real things.

One of my favorite literary hoaxes, which was also one of the longest and most memorable, began in 1994 and lasted for more than 10 years. After faxing letters to writers and publishers, a young teenage writer named JT LeRoy burst onto the highly insular New York literary scene. His writing was the antithesis of the polish and intellectualism typically associated with established authors–he was an underage, transgendered, drug-addled prostitute who wrote graphic but beautiful fiction that borrowed from his own life experiences. The originality of his personality and prose grabbed the attention of respected living writers like Mary Karr and Dennis Cooper–both of whom he built extensive and trusting relationships with over the phone and through letters. Cooper helped put him on the map, and by the age of 16, LeRoy was publishing essays and stories in all kinds of magazines, journals, and newspapers, most of which culled from his rough history of sex work, abuse, and drugs, drugs, drugs. By 17, he had his first book deal, which resulted in a novel called Sarah. It was published in 2000 and tells the story of a 12-year-old boy who dreams of becoming the world’s most famous truck-stop hooker. The grittiness of his tales were amplified by LeRoy’s own highly-publicized past–he had lived these truths, or so everyone thought.

The book BLEW UP EVERYWHERE and cemented LeRoy as a bona fide literary superstar, albeit one that, after six years of growing notoriety, no one had actually ever met in the flesh. Despite his escalating fame, he had refused to appear in person to anyone, not even his famous mentors. He cited crippling social anxiety and privacy issues as the reason for this, which is like RED FLAG NUMBER ONE, YOU GUYS, HELLO? You would think somebody would say, “Um, hold up a second here,” which in hindsight seems like the natural reaction to a mysterious teen vagrant holding the publishing world in his transgressive little palm without ever making a public appearance. Instead, everyone said, “OK!”

Eventually, however, some suspicious folks began to ask questions about his tumultuous past and reluctance to show his face. In response to these skeptics, LeRoy began to sporadically appear at readings and other events, but always while wearing a blonde wig, gobs of lipstick, and huge sunglasses, which is RED FLAG NUMBER TWO. I’m beyond mystified and totally delighted by how that comically shoddy disguise pacified people for another few years. I mean, a wig, makeup, and sunglasses? It sounds like a costume that Bugs Bunny would wear to fool Elmer Fudd into thinking he was a beautiful woman! But in real life, it worked. That makes my heart explode with joy and wonder. What an outlaw, you know?

I’m less thrilled with the ethics of the real person behind LeRoy’s work, which also included a novel titled The Heart Is Deceitful Above All Things (COUGH), which was turned into a movie. After years of growing suspicion and chatter that LeRoy didn’t exist, New York published a story in 2005 that confirmed the misgivings. It revealed that JT LeRoy was the invention of Laura Albert, who was not a transgender bit o’ rough from West Virginia. Rather, she was a Brooklyn-born writer who was a good 15 years older than LeRoy claimed to be. She had written all of LeRoy’s works and enlisted her sister-in-law, among a few others, to appear in public as the author throughout his literary stardom. Cue gasping and outrage from the masses, and lots of conflicting feelings from me. While I do like the idea of a hustler completely screwing with the publishing elite, I’m not cool with appropriating and capitalizing on oppressed or disenfranchised communities. It could be argued that Laura Albert brought LGBTQ issues like youth homelessness and HIV awareness to the fore, but honestly? Fuck that. I feel like readers were dazzled by the otherness of LeRoy’s biography, and “he” was in part successful because WHAT A NOVELTY IT WAS that someone with LeRoy’s lack of pedigree could be part of the oh-so-sophisticated world of LITTRA-TURE. Laura Albert used a marginalized identity to serve herself. That part makes me ill.

BUT! But. I’m so glad all of this happened, because it takes a question that I think everyone who reads autobiographies, or even fiction that scans as autobiographical, considers from time to time, which is “How much of this really happened?” and explodes it into something even bigger: does it matter? Literary hoaxes cause us to wonder: if something wasn’t really real, do the real ways in which it affected us still have any worth? We have to then wonder about what constitutes real here. Does demanding authenticity mean that the work had to be written by a person whose name matches the one on the book jacket, or simply that it makes us feel and think in ways we didn’t before? In the New York article, Mary Gaitskill, a revered author and one of LeRoy’s confidantes, said, “It’s occurred to me that the whole thing with [JT] is a hoax, but I felt that even if it turned out to be a hoax, it’s a very enjoyable one. And a hoax that exposes things about people, the confusion between love and art and publicity. A hoax that would be delightful and if people are made fools of, it would be OK—in fact, it would be useful.”

Even if I had been aware of LeRoy at the time and totally fallen for the ruse, I think I could accept that analysis. I guess I believe that, in these cases, the beauty and helpfulness and everything else that goes along with reading something fantastic can hold up, even when the author has misrepresented the truth behind their work. But of course I would say that—because, Rookie readers, I’m not who you think I am. My real name is Reggie Kunkle, and I’m a 38-year-old man living in Missouri. Sorry, Tavi! ♦