If costume designers are my superheroes, then Edith Head is like Batman, Superman, and all of the X-Men wrapped up in one. 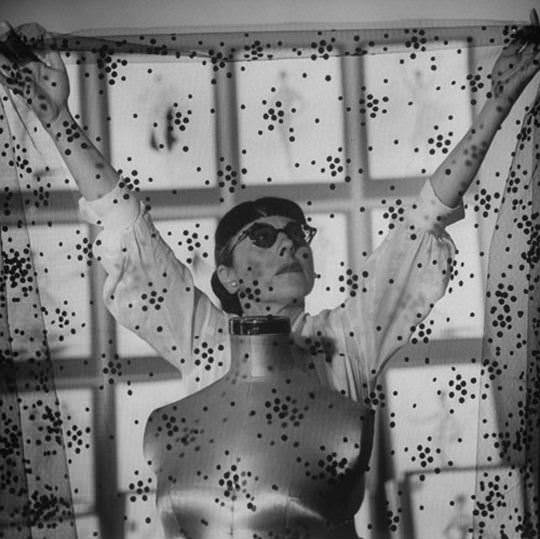 When I was in junior high, I saw the Halloween episode of Roseanne, in which Darlene Conner dresses up like Tippi Hedren from Alfred Hitchcock’s 1963 classic The Birds. I was awestruck, and not just because of how cool she looked with all the crows sticking out of her costume, or because I wanted to steal that idea for my own, but because I LOVED the outfit Tippi wore in that movie, which I had seen for the first time a few weeks prior. Her tailored, pale-green skirt suit is so prominent in the film it almost deserves its own line in the credits. Later, I found out that Edith Head was the designer behind that legendary outfit, and I became an instant fan.

When it comes to fashion, I have always been more influenced by the costumes from my favorite movies than by what I generally see on the runway. The ability to create a wardrobe that not only fits a character’s personality perfectly, but also plants itself in the audience’s memory forever, is pretty much a superpower. And if costume designers are my superheroes, then Edith Head is like Batman, Superman, and all of the X-Men wrapped up in one. 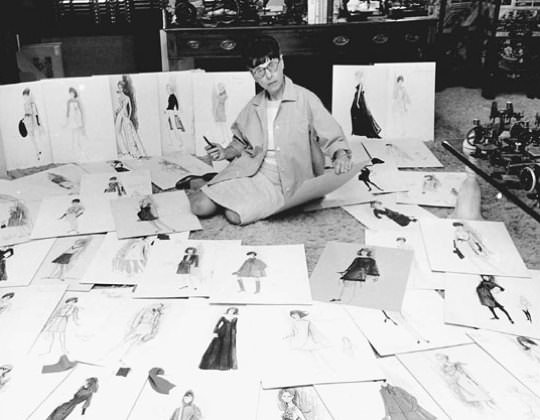 Before getting into Edith’s kick-ass achievements, we have to talk about how she was basically a pioneer of the fake-it-till-you-make-it philosophy. When she applied for a position as a sketch designer at the studio that would later become Paramount, Edith brought in a portfolio of drawings that she had borrowed from her art school classmates. The head designer was so impressed with the diversity of her work, she was hired on the spot. Now I am NOT cosigning any sort of Edith Head-type shenanigans when trying to get your dream gig, but we can totally admire her ballsiness, and the fact that she owned up and confessed to her boss afterwards (who somehow didn’t fire her!). Edith later said, “When you’re very young, you have no sense of morality, I guess. I thought it was very amusing to get this big portfolio. It never occurred to me it was quite dishonest.”

She ended up proving her talents. In fact, she had the most fascinating career: she contributed to more than 1,000 movies, she was nominated for 35 Oscars, and she won eight of them. In 1940 alone, she designed the costumes for nearly 50 movies! Did she sleep?! Can regular people even do that? She dressed practically every famous actress in the Golden Age of Hollywood, including Mae West, Grace Kelly, Veronica Lake, Bette Davis, Marlene Dietrich, Ginger Rogers…THE LIST GOES ON! The silver screen spilled over with her most iconic designs: the overdose of leopard print on Gloria Swanson in Sunset Boulevard (1950); the black-and-white poofy dream that is Grace Kelly’s centerpiece dress in Rear Window (1954); the sharp-edged ensembles in All About Eve (1950). The story goes that the silk dress Bette Davis wears in the Eve’s famous party scene didn’t fit her, causing Edith to freak out right before the scene was supposed to be shot. Bette pulled off the neckline, shook a shoulder, and said, “Don’t you like it better like this anyway?”

Edith butted heads with the director Cecil B. DeMille on the set of Samson and Delilah (1949). DeMille wanted Hedy Lamarr to wear a peacock-feather cape made from real feathers; Edith wanted to keep the design authentic to the setting, and she wasn’t convinced peacocks were in the desert region during Biblical times. (She did it anyway, THANK GAWD.) She was also responsible for the strapless, petal-sprinkled gown that Elizabeth Taylor wears in the scene where she meets Montgomery Clift in A Place in the Sun (1951). That dress was copied by every prom queen during that decade. Shewt, I would copy it today. 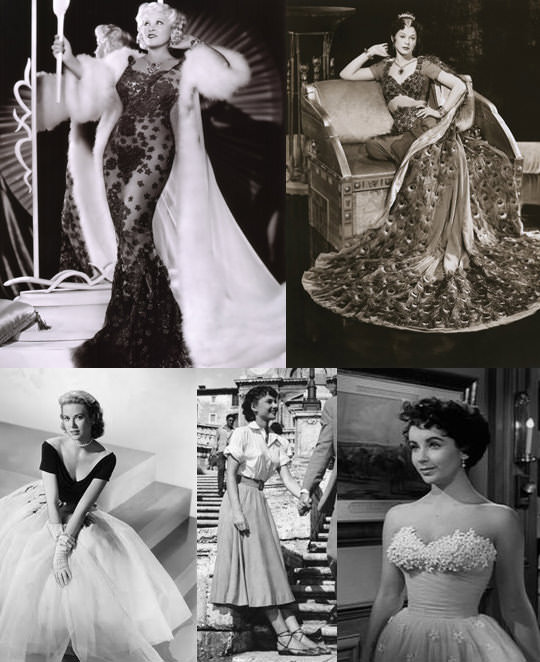 Some of Edith’s most famous designs. Clockwise from top left: Mae West in She Done Him Wrong; Hedy Lamarr in Samson and Delilah; Elizabeth Taylor in A Place in the Sun; Audrey Hepburn in Roman Holiday; Grace Kelly in Rear Window.

I really appreciate Edith’s versatility. She knew how to dress a woman no matter what her body type, from Mae West’s bangin’ curves to Audrey Hepburn’s tiny waist. And she wasn’t limited to women’s clothes—she made my favorite classic hunk, Paul Newman, look sharp in Butch Cassidy and the Sundance Kid (1969) and The Sting (1973). But Edith’s own style was completely devoid of the glamour she bestowed on the stars she worked with: she wore blunt bangs; round, tinted glasses; neutral-colored suits. Though seemingly subtle, her look was memorable—but maybe the clothes were only half of it. Maybe it was Edith, the powerhouse herself, that stood out. The formidable Joan Crawford called her “a sturdy woman, emotionally,” adding, “When that little thing walks into a room, you know she’s there.” NOW…WHO’S GONNA SAY THAT ABOUT LI’L OLE ME?

Edith was an inspiration for so many reasons. During a time when there were not many women in powerful positions in Hollywood, she was the first female head designer at a major studio. Not only did she influence the fashion of many celebrities back in the day, she also designed patterns that everyday women could make themselves, and she created the uniforms for Pan Am’s flight attendants. Her impact is still felt to this day. Michael Kors’s 2008 ready-to-wear collection took inspiration from Edith’s creations in The Birds. They Might Be Giants have a song called “She Thinks She’s Edith Head.” And Edna Mode in The Incredibles, anyone? It was never confirmed to be a legit homage, but I KNOW IT’S SUPPOSED TO BE HER!

Edith once famously said, “You can do anything you want in life if you dress for it.” This statement is so dear to my clothes-loving heart, because I truly believe in the magic of power dressing. Do yourself a favor: start filling up your Netflix queue with Edith’s movies, pay close attention to her works of art, and be inspired. ♦