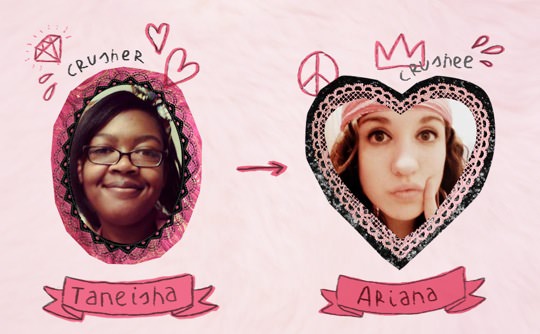 Taneisha and Ariana, both 18, met when they were in the fourth grade in Raytown, Missouri. Taneisha was shy, but they both loved the series InuYasha, and now they are BFFs who go on SlutWalks together and dress up for anime conventions. Love them!

I’ve known Ariana for about nine years now. She’s the only person from elementary school whom I’m still great friends with. In the fourth grade, I remember seeing her for the first time and thinking that she was stuck-up. I was assigned to sit next to her, and I asked her what math problem we were supposed to do. That was our very first meeting. She doesn’t remember it. (I cry a little on the inside.) After that day, we would hang out at recess and talk about the latest episode of InuYasha and other anime we were into.

Ariana is the most rad person I’ve ever met. She puts up with my awkwardness, and she doesn’t think I’m a total weirdo. I love how we can gush over our mutual love/hate for all things hipster. She’s the Iron Man to my Captain America, the Cherry Valance to my Ponyboy. I hate the thought of friendships ending, and I never want that to happen between us. For now, we are going on strong, and I’m grateful that she continues to want me to be a part of her life.

ROOKIE: What made you think Ariana was stuck-up when you first met her?

TANEISHA [crusher]: She was kind of tomboyish, and I thought she had an “I’m better than you” attitude, but she really didn’t. It was all in my head, because I was the new kid.

A lot of our Friend Crushes start this way, with a misunderstanding about stuck-upness. How did you become friends?

We sat next to each other, and I would ask her questions about the assignments. And then we started hanging out during recess, and I found out that we both liked Sailor Moon and InuYasha. There weren’t too many other kids who liked anime, so we would obsess over the characters and stuff. We always used to tell each other, “Oh, we’re going to go to Japan one day!”

Have you gone yet?

No, we haven’t yet. We went to an anime convention called Naka-Kon in Overland Park, Kansas, last winter.

What did you do there?

We cosplayed these characters from Adventure Time. She was Marceline, and I was Marceline’s male alter ego, Marshall Lee. At night, there were raves. That was my first time at a rave.

Was it a real rave, or like a Disney-fied rave?

It was just a bunch of jumping around and loud music. I didn’t see anyone doing drugs.

What’s the best advice Ariana’s ever given you?

I’m really shy, so she will tell me that I just have to go out there and be open around other people, because I can’t be scared and in my shell all the time. I have to assert myself. I feel more comfortable in situations when I’m with her.

How does being with her help you?

She’s more outgoing than I am. We were both in newspaper last year, and I really like to write, but I never liked doing interviews. Sometimes Ariana would go with me to encourage me and be like, “It’s not as bad as you think it is.”

Is it easier being on the other side of the tape recorder?

Did you write anything for the paper that you’re particularly proud of?

I did a story about gender nonconformity, because I was interested in that. I asked students how they felt about the issue. Some people gave me weird looks, but most people were respectful.

I like that you reference your “love/hate” of all things hipster. Most people just hate on hipsters, because no one ever identifies as one.

Yeah, I don’t think I’m a hipster, but some of my friends say I am.

Because of my music taste. I like Cults and the Joy Formidable. And the way I dress, too. I have military boots that I put rhinestones on—I love wearing those—and I wear skinny jeans. I think the way I dress expresses who I am more than I’m able to.

So what is the weirdest thing about Ariana?

OK, well recently, she’s become obsessed with Tom Hiddleston. I don’t think she even knew about him until she watched The Avengers, but then she went and watched all of his movies and read every interview. One time she said she wanted to kidnap him and marry him, and I said, “That’s not legal.”

What should I ask her when I talk to her?

Why is she still friends with me?

OK, but only because I know she will have a great answer.

ROOKIE: So I asked Taneisha what I should ask you, and she wanted to know why you’re still friends with her?

ARIANA [crushee]: Aww! I think she’s super awesome. She apparently doesn’t see that. She’s a really quirky, fun person, and I get to see a really cool side of her. She’s an individual, but she’s not in your face. She’s into weird indie bands that no one listens to, she wears tights under her shorts, she makes some of her own clothes. And people here in Missouri don’t really do that very often. 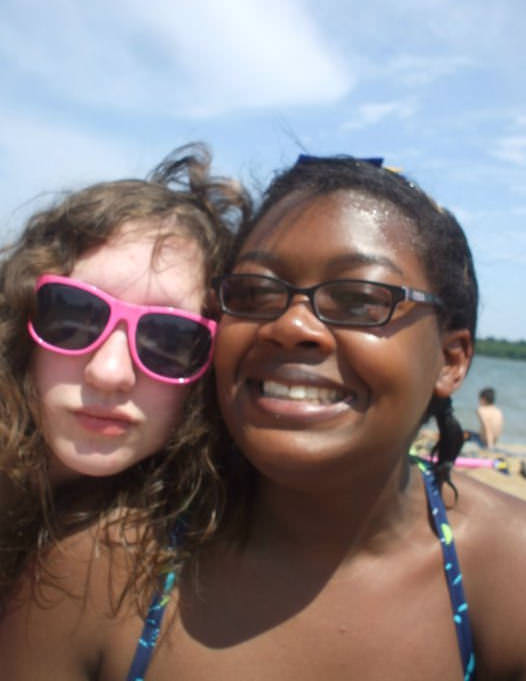 What drew you to her when you first met?

I’m really attracted to quiet people, because I’m usually quiet myself. We could be weird together. Plus, we had some of the same interests.

Are you still really into J-pop?

I’m still interested in it, but I love K-pop. My favorite group is 2NE1. I don’t find American pop as appealing. K-pop is more about the music and the kind of feeling it gives you.

Taneisha says that you’re really good for her in social situations. What do you do that makes her more comfortable?

I don’t really know. I think people sometimes judge her, because they think she’s too shy. And you can’t force people out of their bubble, but you should try to encourage them.

What’s the best advice she’s ever given you?

I’ve always wanted to dress kind of funky, but I’m kind of nervous about the reaction. Like one day recently, I just felt like wearing black leggings that had bright pink splotches on them. And I thought, Everyone at my school is going to think I’m a freak. It’s a Jesuit college, and it’s pretty conservative. And she was like, “Just do it.” And I did. I got a lot of weird stares, but I was happy that I did something I liked without worrying what everybody else was going to say.

So you guys worked at the paper together. Do you have a favorite article that you wrote?

I wrote something about a SlutWalk. There was one happening in a city nearby, and people were upset about it. I wanted to promote the thinking that you shouldn’t have to worry about getting fondled or raped because of the way you dress.

Did you go to the SlutWalk?

Taneisha and I are going to our first one this weekend! Taneisha is more of a feminist than I am. I hadn’t heard of these before she told me about them.

What makes Taneisha better than other friends?

She’s so supportive, because she’s sort of used to the kind of things that people may say about her. She always has my back. ♦

To nominate your closest platonic person for a future Friend Crush, please send ONE email with both of your names, ages, and pictures, and a paragraph or two explaining what makes her the cat’s pajamas, to [email protected], and write Friend Crush in the subject line.