If all the world’s a stage, these women will help you dress for it.

What could a lascivious showgirl, a silent-film actress, a Parisian courtesan, and a murderous housewife have in common? They all know how to demand attention for many reasons, not the least of which is their spotlight-worthy style. From sexy gowns to saucy metallic numbers, these women school us in the art of wearing clothes and never letting the clothes wear them. 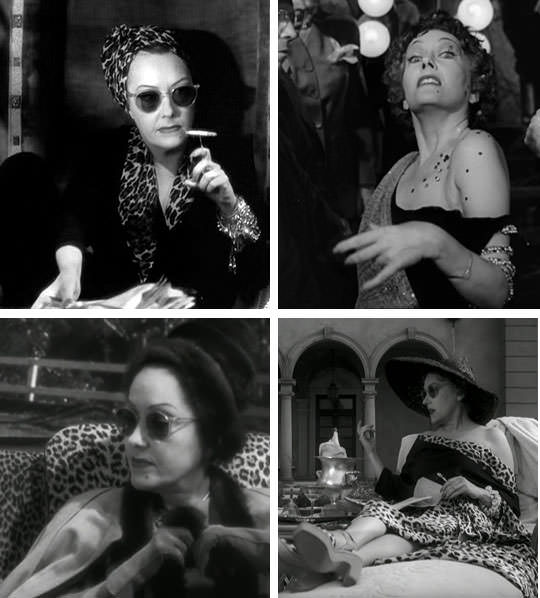 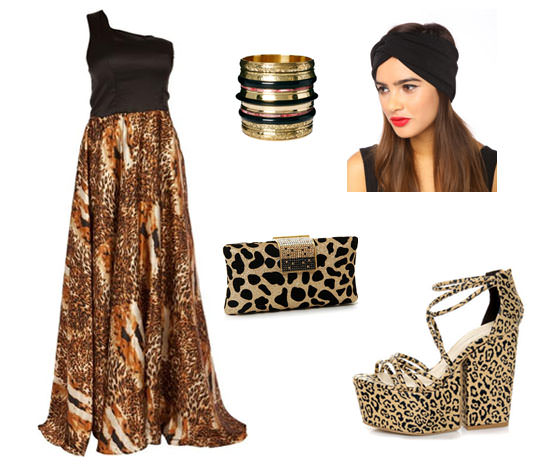 In Sunset Boulevard (1950), Gloria Swanson plays the once-famous (but now forgotten) silent-film star Norma Desmond. Over the years, Norma has managed to maintain the illusion of dominance, mostly because everyone tiptoes around the fact that she’s cuckoolicious. She’s overbearing not only in her personality, but in her wardrobe as well, fond as she is of outfits that consist of head-to-toe leopard print. My kind of woman! While planning her comeback, she takes in a young screenwriting hottie to be at her beck and call. (Again, my kind of woman!) When her hottie ends up falling in love with someone else, we catch Norma’s final act–her descent into madness. To achieve Norma’s decadent style, collect any and all animal prints, starting with a lengthy dress like this number from miinto, and pile it on! In eccentric hats and turbands, you’ll soon be ready for your own closeup with Mr. DeMille. 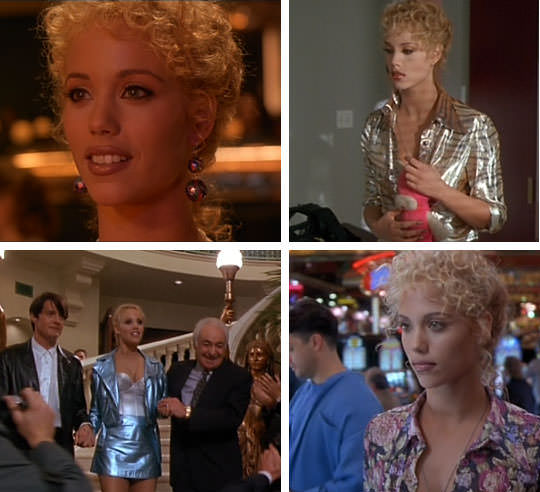 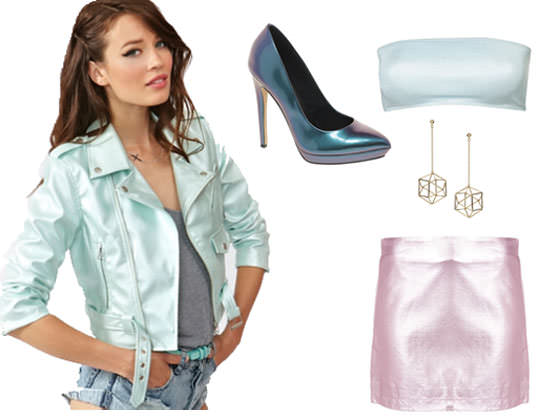 True, Showgirls (1995) is considered one of the (best) worst films in the existence of the universe, but has that ever stopped me before? It’s about a woman named Nomi Malone who makes her way to Las Vegas in order to become a famous showgirl. There’s a lot of backstabbing, scandalo, accusations of cochina-tude, and NSFW-ness, so don’t watch it when the EYES OF THE LAW are around, if you know what I mean. Elizabeth Berkley’s “Ver-sayce”-wearing Nomi has the best style IMHO: colored lace, floral tops, dangly earrings, and seriously shiny threads! Thank the Spice Girls almighty, the metallic fabric trend seems to be alive and thriving today. I mean, take a look at this shiny mint jacket! Nomi Malone would definitely push a girl down the stairs to own it. 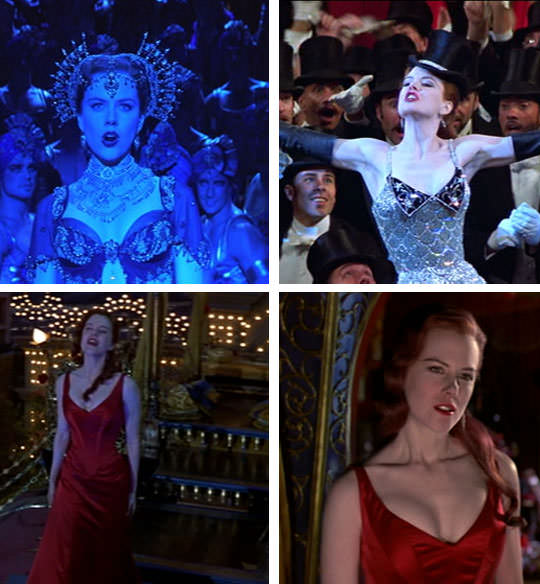 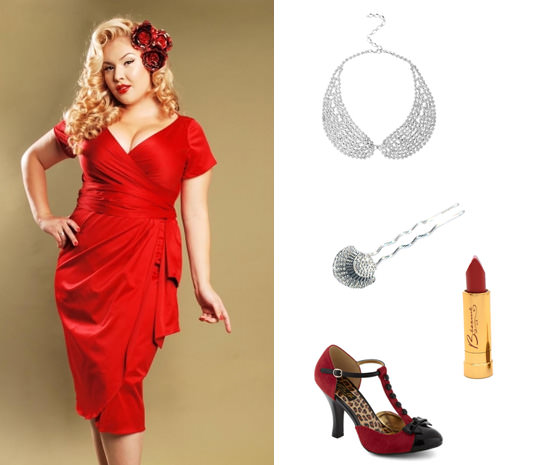 Moulin Rouge (2001) is about a bohemian writer named Christian (Ewan McGregor) and a famous courtesan named Satine (Nicole Kidman) who fall in love and sing their desires for each other in Paris at the turn of the 20th century. The star-crossed lovers teach us that “the greatest thing you’ll ever learn is just to love and be loved in return,” which is nice and all, but tell me, where’d you get them beauteous threads, madame? Catherine Martin and Angus Strathie, the movie’s costume designers, won an Oscar for the explosion of petticoats, lacy stockings, heeled boots, and garter belts galore. And then there’s Satine’s silk gown! There are so many memorable red dresses in life. Vivian’s in Pretty Woman, Jessica Rabbit’s in Who Framed Roger Rabbit, and some lady’s in a song called “The Lady in Red.” Satine’s joins these–it’s the kind of dress you dream about forever. Take note: this is definitely some homecoming/prom material. Pinup Girl Clothing has various crimson-colored dresses that could evoke Satine-level glam with the right sparkly accessories. Now let’s find some bohemian hunks/hunkettes! 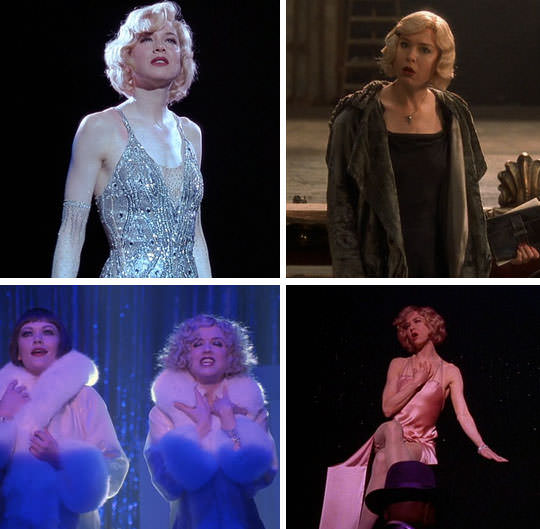 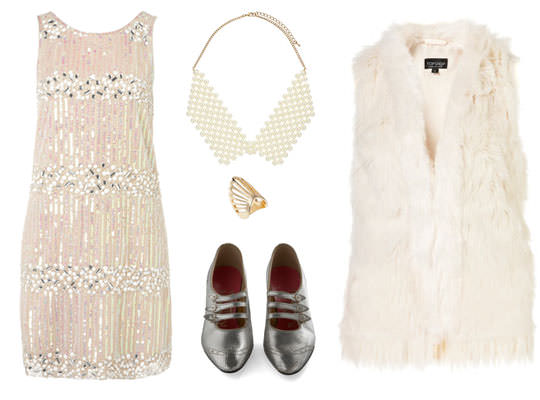 But I don’t think any of our showbiz-loving women are as hungry for fame as Roxie Hart (Renée Zellweger) in the musical Chicago (2002). While spending time in da clink for shooting a man who failed to help her vaudeville career, Roxie takes advantage of her infamy and soon wins the hearts of the press and the public. Designer Colleen Atwood’s Oscar-winning costumes are dripping with sequins, beads, and fringe, embodying the flapper style that the movie, set in 1924, calls to mind. Drip yourself in a little bit of dazzle with this dress from Topshop, but then just avoid the fame-motivated murder. ♦