How to Get Rejected From College

Didn’t get into the school of your dreams? You’re in good company.

Because You Can: The 90-Year-Old Ingénue 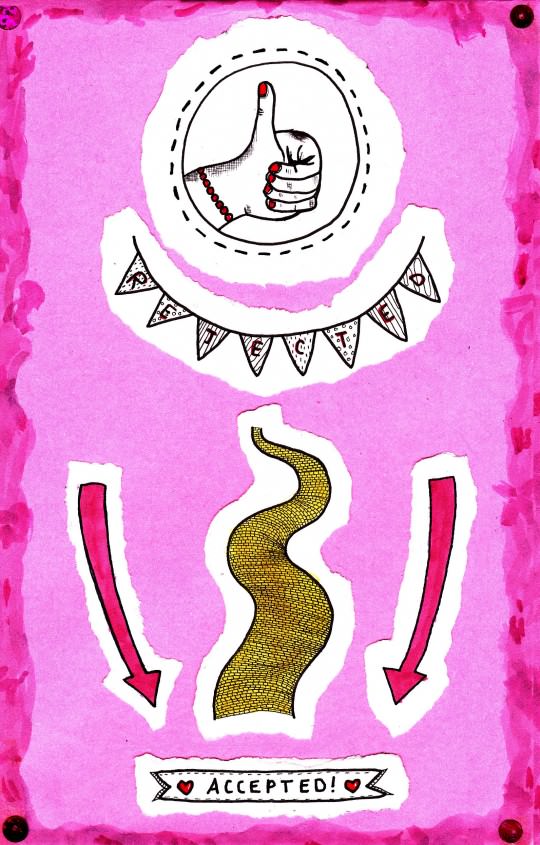 I recently got rejected from my dream college, a college that will remain anonymous (though it shouldn’t be hard to figure out, seeing as how it is pretty much everyone in America’s dream school). I applied early decision and worked my fucking ass off on my essays. My extra-curriculars were unique and representative of my personality and my future major. I had shining recommendations from some of the most revered teachers in my school. My GPA and my SAT scores, however, were not so sparkling. But the university assured me they would look at “the full package.” One day during first period I got an email on my phone telling me I was rejected. Well, there went my day. I left school and then my dad took me to out to breakfast. NO TEARS.

After my first rejection, I got rejected from a lot of other schools on my list. Fortunately, I was eventually accepted into one school, which is where I go now, and it is awesome. But I know how it feels to get rejection letter after rejection letter.

Maybe you got rejected from a college. Maybe you got rejected from your dream school. Maybe it was your safety school! Maybe it was almost EVERY SCHOOL ON YOUR LIST. If that’s so, you probably feel like you’re spiraling into a tunnel of doom that continues forever and ever into the fiery depths of misery. I’m here to tell you that it’s going to be OK! This isn’t a guide on how to get rejected from a school (that’s really easy to do, because colleges love making kids cry); it’s a guide on how to deal with that rejection.

1. Never be TOO sure of yourself.

The worst college rejections are the ones that you are sure are going to be acceptances. I had friends who were legacies, whose families had school wings dedicated in their names, and who had their college interviewers tell them, “There’s no way you won’t be accepted.” They were all rejected.

I told myself I definitely wasn’t getting into any of the schools I applied to. This doesn’t mean I didn’t put all of my effort into my applications; but it eased the blow of getting rejected. When I was rejected, it didn’t turn my world upside down. My low expectations made it easier to handle.

I’ve seen a lot of my friends expect to be accepted to places that rejected them, and they inevitably felt really shitty about it. So I think my method isn’t a bad idea. Don’t sit around expecting acceptances, because nothing is ever certain! NOTHING!

2. “Everything happens for a reason” is actually sort of true.

You will hear this phrase a lot when you get rejected from a college, especially if it’s the one you really wanted to go to. I hated this phrase when this happened to me, because at the time I didn’t really understand what the “reason” was. I thought it was just “to make Hazel feel inadequate.” But my first rejection led me to apply to the school I’m attending now. I love it here, and I never would have even applied if I hadn’t been rejected from my former dream school.

When a friend of mine got rejected from his top choice, he immediately posted about it on Facebook. He knew that all his friends were waiting to hear whether he got in, so making a blanket announcement saved him the trouble of breaking the news to each and every one of his friends individually. It was also a really cool move, in my opinion. My high school was extremely competitive about college admissions, so most of the kids there kept their searches private. My friend’s post was something like “Yeah, I got rejected; whatever, I’m alive.” When I got rejected I did the same thing.

Getting rejected is nothing to be ashamed of! So many smart and talented people get rejected from multiple colleges. You know more kids who have been rejected than you think, because kids lie. They might say, “Oh, I’m not interested in that school anymore,” even though they were obsessed with it when they applied. Sharing your own rejection might make 10 people who are secretly in the same boat feel less shitty about themselves.

4. You’re allowed to feel really, really sad (or pissed off) about being rejected.

Not everyone wants to go to college, and that’s totally cool. But if you do want to go, you’re allowed to get upset if the process doesn’t go the way you planned. Sure, some people are all blasé about being rejected; but for others it can be devastating. That’s not stupid or lame. Your sadness shouldn’t consume your life (I doubt it will), but if you want to take a few days off from school, or burn your college sweatshirts in a fiery blaze, or even just cry about it, it’s OK.

5. Transferring isn’t out of the question!

People act like transferring is impossible, but it’s not! Yes, the idea of applying to college all over again can be daunting, but if you are crazy in love with a school and you truly believe you are destined to go there but got rejected the first time around, try transferring in after your first semester, or your first year. If you had shitty grades in high school, kill it your first year in college and then reapply. You have nothing to lose, because you’re already in college.

6. You are not your application.

Unfortunately, it’s really hard for a college to get to know you through the application process, but your app (and maybe an interview) is all they have to decide if you’re in or out. I don’t care what your essays are about or what your GPA is, the college application will never truly represent you. I sincerely doubt your high school GPA and SAT scores are indicative of your work ethic, talents, and personality! Therefore, if/when you get rejected, please don’t take it personally. If a college rejects you, they’re rejecting your application (aka your high school grades, a standardized test score, essays, and an electronic form), not you as a person. You are way bigger and better than your application!

7. You’re totally going to look back on that time you got rejected from college and LOL.

The college-application process seems SO important, and it can definitely be nerve-racking, but when you look back on it you’ll think,Why did I waste so much time and energy feeling bad about this? And hopefully you’ll laugh.

When another friend of mine got rejected from college, he wrote a really funny letter back to the university, rejecting their rejection of his application. I published it in my high school newspaper, and everyone thought it was hilarious, because almost all of us had gotten rejected from at least one school! This annoying period of disappointment will end, and those freakouts (if you haven’t had at least one, you will) are going to seem crazy funny. Just you wait.
Applying to college is infinitely lame in all respects, and being rejected is the worst part. But if keep these seven points in mind, your future (or past) college rejection will be a lot less horrible. I wish you luck, young college-applying student! ♦