Bad Girls Do It Well

They’re not so nice. That’s why I love them.

When I was in middle school, I forced my two best friends to pretend to be in one of our favorite movies, Heathers, which is about a quartet of high school friends, three of whom happen to be named Heather. I was the bossiest, so I assigned the roles: Rosha, who was sweet and amenable to most things, was Heather #2. Olivia had brown hair (the horror!), and was therefore relegated to being Veronica (played by Winona Ryder, by the way). I assume I didn’t make her Heather Duke, the brunette Heather, because that Heather was played by Shannen Doherty, and Beverly Hills, 90210 was already on the air, making it far too desirable a part. (Brenda Walsh, Doherty’s character on 90210, is a patron saint of teenage bitchiness.) I, of course, was Heather #1. In my poor, demented brain, it was better to be the evil bitch queen than to be Winona Ryder. This shows both how foolish I was at the time (Winona Ryder always wins, always) and how persuasive a truly bad girl can be.

I’m happy to report that junior high was the peak of my cruel period, which wasn’t all that cruel. I think the worst thing I ever did was not invite someone to my birthday party. I did love being bossy, and if I’m being really honest, I still do. Still, now that I’m an adult and a mostly sane and even-keeled human being, sometimes I miss the part of me that wanted to dominate and destroy. I have no interest in that kind of drama in my real life, so I turn to fiction for a (mean) fix. Here are some fictional characters that I can always turn to for truly vindictive, delicious satisfaction. Don’t get the wrong idea—I don’t want to poison my friends with Drano, but I do want to live vicariously. These women help me channel all of my wickedness into the fictional zone. 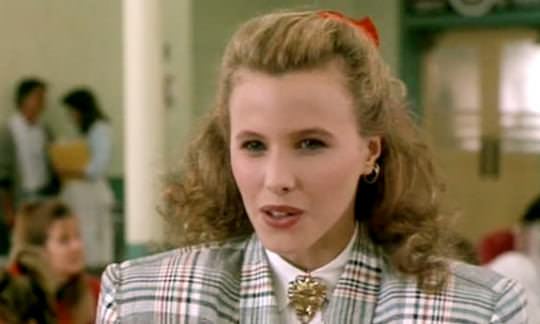 The aforementioned Heather Chandler, Heathers (1988)
Heather Chandler uttered the immortal words “Fuck me gently with a chainsaw,” and won my heart forever. She claimed red as her power color, whether it was a croquet mallet or a scrunchie. I think my favorite thing about Heather Chandler is the disgusted look on her face when confronted with anyone outside her immediate social circle. This is popularity minus the sugary coating of friendliness—this is fear-mongering, pure and simple. As Heather puts it, the other kids at Westerberg High “all want [her] as a friend or a fuck.” I don’t think there are many accurate portrayals of the striving misery of high school, but this comes close. When in doubt, trust that the popular girls are plotting your demise. 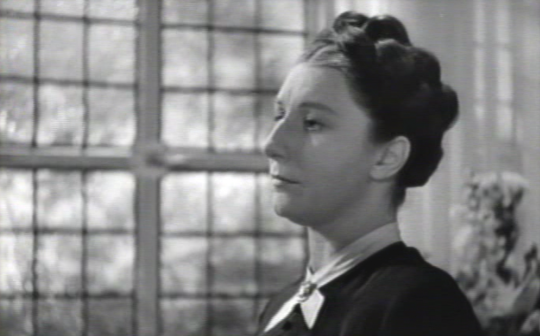 Mrs. Danvers, Rebecca (1941)
The woman who runs Manderley, the great house at the center of Alfred Hitchcock’s mysterious masterpiece, is as restrained as Heather Chandler is wild. The plot of the movie is this: a sweet young woman meets a dashing rich guy on vacation, and marries him on the spot. When they get back to his house, the new Mrs. DeWinter has to deal with Mrs. Danvers, the head housekeeper, who was extremely attached to the last wife. Mrs. Danvers’s ink-black hair is pulled back into a tight braid wrapped around the crown of her head like some kind of funereal challah bread. Her evil witchiness mostly has to do with convincing the new Mrs. DeWinter that she is nowhere as good as the old one, the titular Rebecca. This is your basic black-and-white psychological warfare, with crazy-eyed manipulation up the wazoo. On a scale of 1 to 100, the creepy factor is 101. 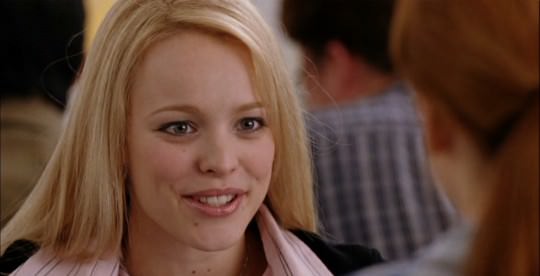 Regina George, Mean Girls (2004)
If Heather Chandler has a true heir, it is Means Girls’ queen bee, Regina George. Regina manipulates, lies, and humiliates, all for her own amusement. She starts rumors and delights in their success. She tells her friends what they’re allowed to wear, say, do, and think: they can wear pink on Wednesdays, not Thursdays. One cannot wear sweatpants to school. When (spoiler alert) Regina gets hit by a bus at the end of the movie, the audience cheers. But do we not also cheer when she calls her ditsy friend Karen out for being a moron? We do. Because Tina Fey wrote this movie and is a genius, she gives Regina a soul in addition to a quick tongue. Fey understands that most mean girls operate out of a sense of self-consciousness, not undiluted cruelty, that there is a mean girl hidden inside all of us, and that that’s mostly OK. No mean girl’s reign lasts forever, but oh, there is glory at the top. The queen is dead, long live the queen. 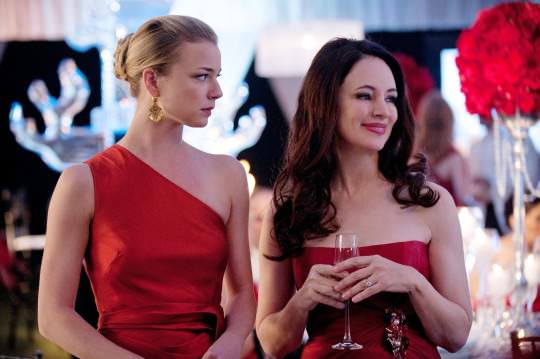 Victoria Greyson, and Emily Thorne, Revenge (2010-present, ABC)
This summer, I fell head over heels for Revenge, an extremely melodramatic nighttime soap. The premise is this: Emily Thorne is exacting revenge on Victoria Greyson and her family for framing Emily’s father for terrorism. The reality is this: both of these women are completely psychotic, and it is great, great fun to watch. Here is a brief list of things that Revenge has taught me it’s relatively easy to do: frame someone for murder, frame someone for terrorism, set a house on fire, have a clambake, set up a tiny webcam shaped like a dolphin in everyone’s house without anyone’s ever noticing that they suddenly have a little dolphin on their mantel, get engaged, hack into other people’s computers. Madeline Stowe, who plays Victoria Greyson, has the kind of face that David Lynch should really be taking advantage of—she looks both beautiful and twisted, like she could peel off her Hamptons-society-lady mask at any moment and start speaking some ancient demonic language. Emily VanCamp, who plays Emily Thorne, has exactly the opposite problem and rarely displays a new facial expression, turning Thorne into a Kabuki character. Together, they’re magic, always staring at each other across a white tablecloth, legs crossed, hands neatly folded, looking like two schoolgirls. They never say a cruel word to each other’s faces, and yet the hatred oozes off them like a bad smell. Delightful. 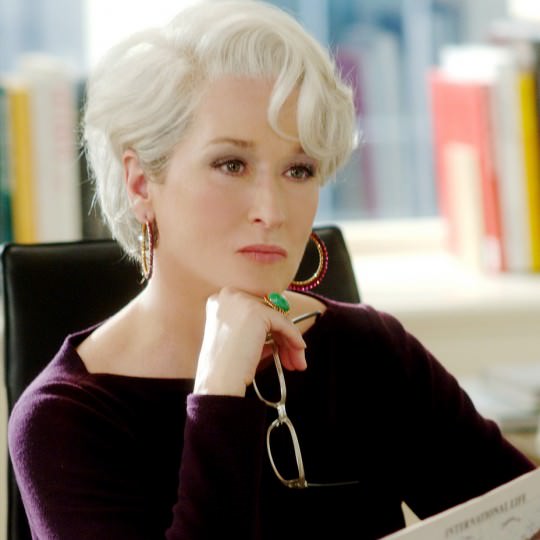 Miranda Priestly, The Devil Wears Prada (2006)
Yes, yes, Meryl Streep is the best actress of the last 50 years, and she’s done Shakespeare in the Park, and she’s won Oscars, and she is basically a goddess, and everyone loves her. That’s all well and good, but my favorite part of Streep’s is her haughty, cold, and chic portrayal of a fashion-magazine editor in The Devil Wears Prada. She will school you on your dumpy cardigan, she will make you bring her coffee, she will roll her eyes when you fail, but good god, you will love her anyway. If I were Meryl Streep, I would wear my hair like that for the rest of my life, a silver wave always cresting over my forehead. 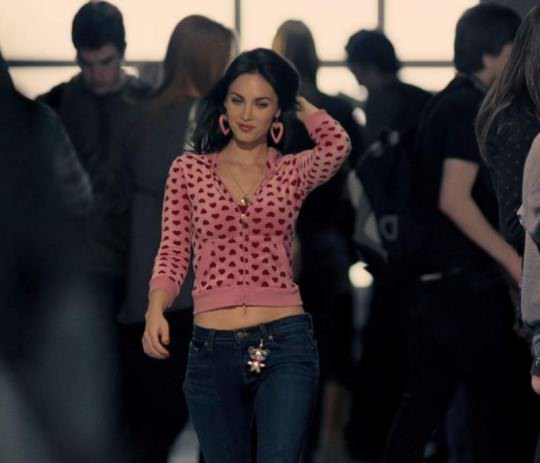 Jennifer, Jennifer’s Body (2009)
It is a crime that so few people went to see this movie. The marketing was all wrong—it was pitched as a horror movie for dudes who thought Megan Fox was hot, when it should have been pitched as a follow-up to Heathers, a movie about what happens when teenage girls are actually demons. In this movie Jennifer persuades boys to follow her into the woods, where she can snack on their internal organs. It’s a hilarious movie, and if all goes according to my master plan, will become a camp classic, shown at midnight screenings at art house cinemas around the globe, Rocky Horror style. 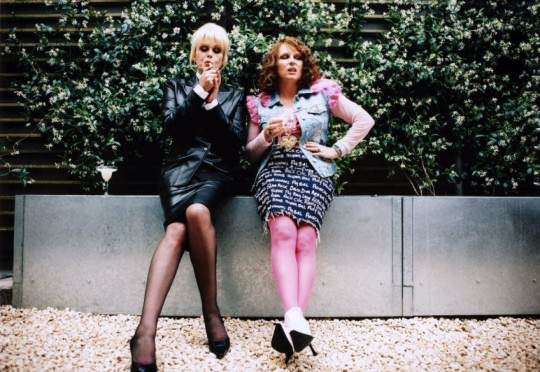 Patsy and Edina, Absolutely Fabulous (1992-2012, BBC)
They smoke, they drink, they pop pills, they never think of anyone other than themselves. They wear Lacroix, they ignore Edina’s bookish daughter, they go on holiday. They’re the self-obsessed BFFs from one of the UK’s best television comedies of all time. This is pure, unadulterated escapism. Patsy and Edina are cruel and merciless, but take away their vodka and ciggies and they’re reduced to heaps on the floor, unable to move. They don’t mean to be wicked, they just can’t help it.
If all of these women were in a room together, the room would spontaneously combust. That’s what I love about them—they are fiery and potent, unwilling to compromise. I think that’s why I turn to them—it’s not only the drama that I lack in my own life, it’s the way that all of these women are willing to do whatever they need to do in order to get shit done. They are ambitious, and fierce and strong. The next time I think, oh, I’ll just go with the flow and see what everyone else wants to do, I’m going to channel Heather Chandler and say, “You know what? Croquet at my house, babies. Love it or leave it. The choice is yours.” ♦