What to do when you or someone you know comes back to school…different. 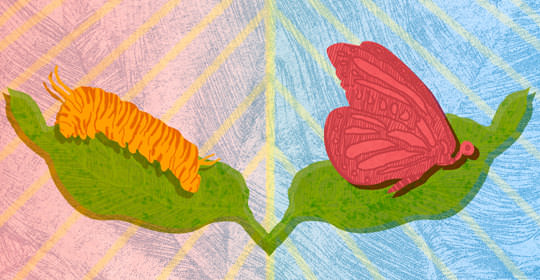 In the pre-internet days of 1993, it was easy to spend an entire summer away from your classmates without hearing anything about their lives. So when Carla (not her real name) came back to school in the fall of 1992 with a nose ring and a new wardrobe, I reacted the way anyone would: I immediately rallied my friends around a set of hallway lockers to talk smack about her.

How dare she! For the entire eight years we’d been in school together she was preppy, right down to her penny loafers—how did a nose ring fit into that? Why was she wearing a flannel when last year she made fun of us for wearing them? How did she get her hands on a pair of Doc Martens? Did her parents actually give her permission for that piercing, or does she think she’s some kind of badass? Who does she think she is now, anyway?

While it’s embarrassing to remember how much I used to partake in this girl-on-girl crime of behind-the-back bitchery, discomfort and judgment are common reactions to a person’s changing something about their personality. What I didn’t know then, and what I sometimes struggle to remind myself now, is that people are constantly changing, and some changes are easier to see than others.

We get used to seeing people a certain way (especially in school when you’re surrounded by the same people for years), and make assumptions that the outside matches the inside—that dressing preppy comes with a set of cultural rules about BEING preppy, or that dyeing your hair bright pink indicates a certain fuck-you, non-normative mentality. But maybe someone just really loves polo shirts, or the color pink. Maybe Carla dressed preppy because she had to wear the clothes her parents bought for her, and now that she had a job she could buy the clothes she really wanted to wear. It’s also possible that she really liked preppy clothes one year, and really liked grungy clothes the next—taste is mutable! Maybe she had a revelatory experience over the summer and really clicked into what she liked most about herself, or somehow found the confidence to not care what other people thought about how she should look. When Kat in 10 Things I Hate About You started dressing differently and stopped hanging out with her friends, they couldn’t understand what was up, though the reality was that she’d had a bad sexual experience and just wasn’t down for the clique mentality anymore. If movies have taught me anything, it’s that you don’t always feel secure just because you look the part. A lot of metamorphosis is internal, meaning you can’t always understand how or why someone seems so different, or why it seems they’ve flipped the script overnight.

Internal changes are sometimes the biggest changes you can make on the way to becoming the person you want to be, and some of the hardest to accept or explain. Summer, with all of its sunshine and sleeping late and empty house while your parents are at work, often gives you space and time away from people. It’s possible that after two months of no contact you decide you really don’t hate Jessa (a girl you always thought you hated), that hating her takes up way too much of your day and you’d rather dedicate that time to your new-found love of pottery or reading every book bell hooks ever wrote. You don’t have to form a girl band or make out with Jessa, but simply changing your mind about her can be an affront to your other friendships. If the bulk of your friendship with Ali is spent talking about how much you hate Jessa, you can see how it would be totally weird for Ali if you suddenly stopped talking about Jessa entirely. To Ali, it just seems like your change is negative because you have nothing to talk about anymore, and, as a result, your friendship has fundamentally changed. You may feel like the same ol’ person, but your old friends only see that you’re hanging out with different people now, and seem to like things you never liked before.

Friendships are often casualties in this landscape of personal evolution, but that doesn’t always have to be terrible. The reason we feel upset when the people in our life change is that we’re always looking for authenticity; we want to know that the people we invite into our lives are the real deal. When you start to build a friendship with someone, a lot of your interaction is a leap of faith based on how they appear to be before you get to know them. If they change something about themselves, or something comes along and changes them, you could feel like you were duped or tricked into liking a different person, instead of accepting the idea that everyone changes. But if you can’t change a little something about yourself without a friend’s freaking out, are they really a good friend to begin with?

Sometimes it helps to pinpoint whatever it is that’s making them feel weird; no one wants to feel like they’re being left behind. It’s a little awkward (and kind of impossible) to have to explain your personality, but it could be helpful to grab some coffee and just talk to your friends how you’re feeling. Instead of being defensive about who you used to be, a conversation that’s more like “hey, this is where I’m coming from now” goes a long way toward keeping things stable. Also, it sort of becomes your friend’s decision whether or not they want to take the ride.

If you’re not going to remain close with your old friends, parting ways doesn’t have to be a nasty event. You can sort of decide that, hey, right now we don’t really jibe, but maybe we’ll be close again in the future—or at least reassure them that you still really love them even if you hang out with your new work friends a lot more on the weekends. And if there are people saying terrible things to you about your new look or attitude, throw ’em classic bitchface—you’re under no obligation to reward their ignorance, and who cares about them anyway?

It’s difficult to find hard truths about yourself when you’re surrounded by the same people every day. Trying different things or changing your mind about something is a good way to start having the experiences that’ll lead you to a new level of awesomeness, and it indicates an open-minded willingness to grow. Even if you stay in the same physical place your entire life, it’s up to you to decide who you want to be at any given moment. Unless you’re acting like a complete psychopath or doing something dangerous, it’s really unhealthy to get into the habit of letting other people dictate who you should be. It’s not your job to make people accept you, or to force them to understand your evolution—your only job is be comfortable with the way you move through the world.

Everyone has a million little personal rebellions stored within them, waiting to peek out. It’s an act of bravery to change your mind. ♦