Why Can’t I Be You: Kim Hastreiter

Hazel talks to the editor of Paper about how to steal her job.

We Stand With Pussy Riot 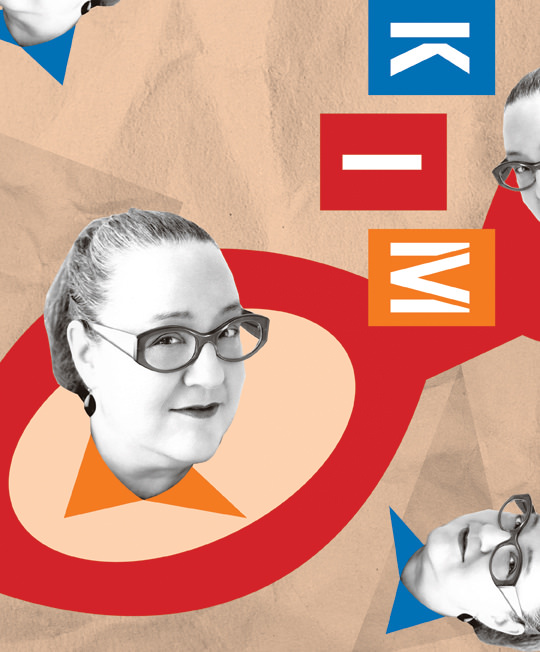 Kim Hastreiter is the co-editor-in-chief (with David Hershkovitz) and founder of Paper magazine, an independent publication that has covered the culture of New York City since the mid-1980s. If something cool was happening in the universe during the years of 1984 to now, it’s probably been covered in Paper. It’s the kind of magazine that brings different pieces of the world together in ways you would never predict. Somehow an interview with Courtney Love being in the same issue as a piece on the Kardashians just seems so right, when Kim brings them together.

But Kim is more than a magazine editor—she’s also a curator of all kinds of culture. She seeks out the most interesting fashion, art, and design from the most unexpected places and shines a light on all of it. She doesn’t hoard her discoveries in her ivory tower; she’s about sharing them with the public. She introduces musicians to artists and artists to fashion designers, because all art is equal in her eyes.

We talked to Kim about how she founded Paper; how to make an independent magazine successful; and how art, culture, fashion, and food (yes, food!) are all connected to a larger revolution.

Did you always know you wanted to be a magazine editor?

No! I never wanted to be a magazine editor! I wanted to be an artist. I had no knowledge or anything [about magazines]. I didn’t want to be a journalist. I was in art school at Cal Arts in L.A., where I studied with the artist John Baldessari; he was my mentor. After school I moved to New York to be an artist.

When I arrived in New York City I was trying to get into a studio, but I needed money. So I got a job selling clothes at this store on Madison Avenue that was owned by three women and was kind of fancy but bohemian. One of the women was Betsey Johnson, so it was like this kind of kooky uptown store. I was a salesgirl, basically, but then I started doing windows with artists there, and I met a lot of people and I kind of fell in love with fashion.

I was still trying to be an artist, though. I started going out and became super interested in a scene that I discovered downtown in the 1970s that involved artists who were working together. People who were making music met people who were making films, who met people making clothes. It was kind of a renaissance in downtown New York. Nobody had any money, and everyone was just collaborating. It was a very bohemian scene that I found very exciting. I told all my friends who I went to school with about it, but nobody was very interested in it because they were all very serious about getting into the traditional art world.

Then I met the photographer Bill Cunningham, because I used to take the subway every day to Madison Avenue, and I was dressed crazy [laughs]. I would wear stuff I had gotten from flea markets and mix it with stuff I had gotten from Paris, so [Bill] would always run after me and photograph me. I got to know him, and he had heard of this job at this newspaper that used to exist called the SoHo News. Back then there weren’t a lot of magazines and newspapers. There only used to be the Village Voice, the New York Times, the New York Post, the Daily News, and there was the SoHo News. There were no young, hip culture magazines then. SoHo News was looking for a fashion editor, so Bill was like, “You should have that job.” He called them and got me the job there. I didn’t know anything about journalism, but the job was more style editing.

When I got that job I went back to all the creative people I knew and had met downtown, and started bringing them to the paper—Keith Haring, Robert Mapplethorpe, and Kenny Scharf all either modeled for me or made pieces for me. Then I met Vivienne Westwood, who was collaborating with her then-husband, Malcolm McLaren, and I thought what they were doing was so interesting in the ’70s, with Malcolm discovering bands like the Sex Pistols and Vivienne designing a whole look around the music that Malcolm would produce. The pieces I produced in the style section weren’t normal fashion stories. I fell in love with doing it, because I was doing my art, but in a broader forum. Instead of a gallery, I had pages.

How did you start Paper?

Well, after a few years the SoHo News sort of went out of business, and I didn’t know what to do. I tried to get a job at Condé Nast and I did a piece for Vanity Fair, but I didn’t enjoy working at those big places. They never let you just make your idea; it gets watered down with all the money and all the people. So I just thought, Maybe I should make my own magazine.

Then my good friend David Hershkovits, who also worked at the SoHo News, said that we should make another magazine. David was more like a writer and editor, and I was more like a style person. We just felt that there wasn’t any magazine that had style in it, and that’s what we wanted—to do something that had style and culture and was made by artists. Soho was just starting to become this cool place, and we just felt it was a really hot moment there—Keith Haring was getting big and Madonna, who was just this girl who danced in the clubs, was getting big. Hip-hop was starting in the South Bronx; and everyone was going downtown and uptown. Hip-hop was sort of merging with the punk scene. It was just amazing.

Who wrote for the magazine back then?

If you look at the first issue from 1984, all of our friends wrote stories and they’re all in it. Afrika Bambaataa wrote a DJ column; Futura 2000 wrote a technology column. Ruben and Isabel Toledo were my friends, so I wrote about them.

Paper is like the history of New York, really. We did it in my house for two years. We had no money, ever. We did it because we really didn’t want to get a job. We wanted to make our own job up! And we made a place for all of our friends. We weren’t journalists, so we would much rather teach someone how to write if they were experts on a certain genre of movies that was really underground or interesting. David would teach them how to write rather than get a [journalist] to write about something they really didn’t know about. We hired enthusiastic young people who were insiders, and they would write about what they loved and knew about. It makes for a much better magazine.