The fine art of listening. 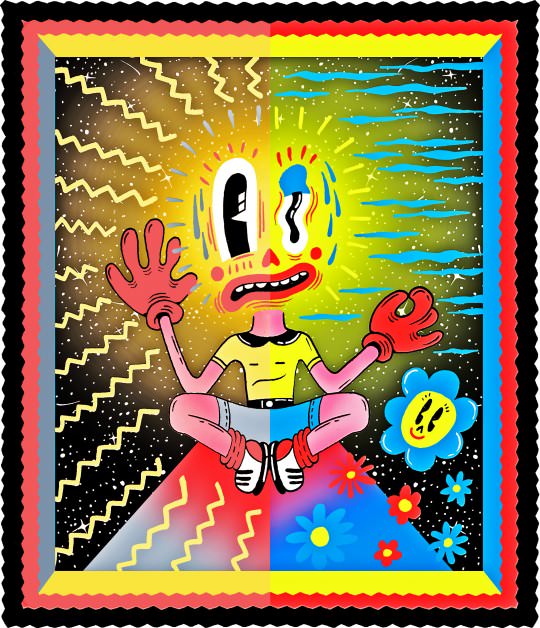 I used to try to imagine the inside of my brain as a silent, serene space—a series of sparkling silver file cabinets, with everything locked in place, memories filed and laminated and organized by date, time, and intensity. This was an exercise I’d attempt to do during a brief moment of meditation, and it would work for about eight seconds. Then the real interior of my brain—which looks more like sped-up footage of Tokyo at night and sounds like ten million radios blaring different stations all at once—would come rushing back in.

“Concentrate on your breathing,” the woman leading my meditation tape would say. “Accept all the thoughts that come into your head and then let them pass.” Or at least I think that’s what she said. I was too busy trying to adapt to the static in my head to pay attention. My brain had, once again, stopped listening to the world around it and started focusing on the pictures and sounds that were flashing on my internal screen.

Listening is an art. Some people are naturals—blessed and cursed, as they’re the people who get to know the most about the world around them, but also the first people who get cornered by those who haven’t yet learned that a conversation requires more than one voice. When I talked to Jeff Garlin last October, I admitted that I had a hard time talking to people without interrupting, because of my ADD. Though there are occasions—usually in collaborative creative situations—where I take Jeff’s advice and politely ask to interrupt, because I need to get an idea out before I forget, in most situations, particularly social ones, I’ve had to practice my listening skills so that I don’t end up being the person saying, “I’m sorry, what?” or talking incessantly while the poor, darling good listener trapped in a corner nods kindly and waits to get a word in (or get the hell out of there).

The trick to listening is to adapt your skills to different situations. I can’t give you the magic keys to becoming the World’s Greatest Listener, because everyone’s brain is different, and everyone finds a different way to engage and pay attention. But I can give you some tips on what helped me, in the hopes that maybe one of them will stick with you. (By the way, you’ve already read two paragraphs, so you’re already engaging and stuff. Look at you! If you need to take a 15-minute break and think about unicorns or string theory or something for a while, I totally understand. )

Listening Tips for the Easily Distracted:

1. Keep Your Eyes Up
For some of us, eye contact is extremely difficult. I’ve spent much of my life staring at some really lovely carpets and ceilings, and not in the sexy way. Social anxiety and a tendency to drift have made it easy for me to keep my eyes focused on anything but the person speaking to me (or the group I was standing with), which only pulled me further away from the conversation. As painful as it may be (and it gets easier with practice), keeping eye contact with the person who is speaking to you helps you focus on what they are saying, because you’re forced to focus on their face, and by giving their face—and their expressions, and the lilt in their voice, and the way they animate their stories with their bodies—your full attention, you allow the sound that escapes from their mouth to overpower the radios blaring in your brain.

2. Make It a Game
One of my favorite features that we run is Real-People Reviews, because it highlights how everyone on the Rookie staff (and everyone in life, really) interacts with a weird and wonderful group of strangers on a daily basis. You never know what people are going to do or say, and one way to practice listening is just to sit on a city bench, or at a restaurant, or on the subway, or on the bus, or in class, or at the grocery store, and just listen to the conversations taking place around you. You may only get snippets of what people are saying, but by turning off your running commentary and tuning in to others’, you develop a better sense of how others communicate, as well as a sense of empathy toward the people who walk the world with you, which helps you to connect on a deeper level. And some of the stuff you’ll hear is just straight up hilarious, which is a bonus, really.

3. Become a Reporter
My best friend, who is one of the greatest listeners I’ve ever met, has a technique that he uses in social situations: he asks everyone he talks to at least two questions about themselves, and then gets out of the way, letting people answer and trying to find a follow-up question within their response. Human nature and its attendant narcissism work in everyone’s favor here: people LOVE to talk about themselves, and if you’re the one directing the conversation, it may be easier for you to pay attention to it. Empathy also comes into play here—if you treat someone the way you’d like to be treated, and attempt to get to know them by asking them questions that allow them to open up and share, it may be easier for you to share with them when your turn rolls around, ensuring that there’s an actual conversation taking place, as opposed to a series of awkward pauses and ceiling stares.