She’s kind of too cool for words.

Summer of Love, Part One 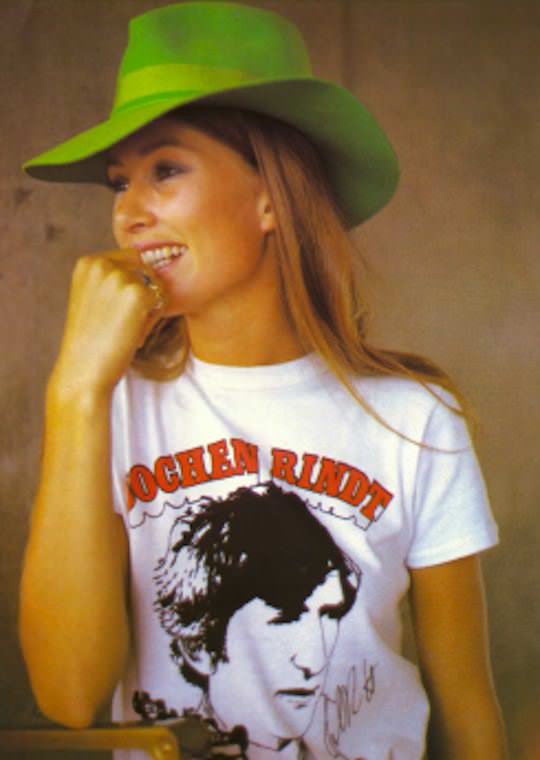 Unless you’re a major sports car racing nerd, chances are you’ve never heard of Nina Rindt. A Finnish-born model, Nina ran with the Swinging London crowd and was good buds with Twiggy (thus proving the theory that awesome people always know one another). In 1967 she married Jochen Rindt, one of Formula One racing’s biggest stars, but when he died in a car wreck in 1970, Nina sort of dropped out of the spotlight. Which is too bad, because I think she’s one of the most underrated style icons of all time. She does that slouchy ’70s bohemian thing in a sharp menswear-y way, and that boyish-androgynous thing in the most feminine way. OK, I am officially talking in the fashion version of a “one hand clapping”-style Zen koan, but that’s what Nina does to me. She’s kind of too cool for words.

Nina’s a very private lady who never gave a lot of interviews, so most of what we know about her comes from these amazing photos, which show an enigmatic woman who looks powerful and chic. So to help illuminate the Eternal Mystery of Nina, I have conducted a highly scientific study of these photographic records, and I present my findings to you now. Here are my Top 10 Reasons to Adore the Fabulous Nina Rindt: 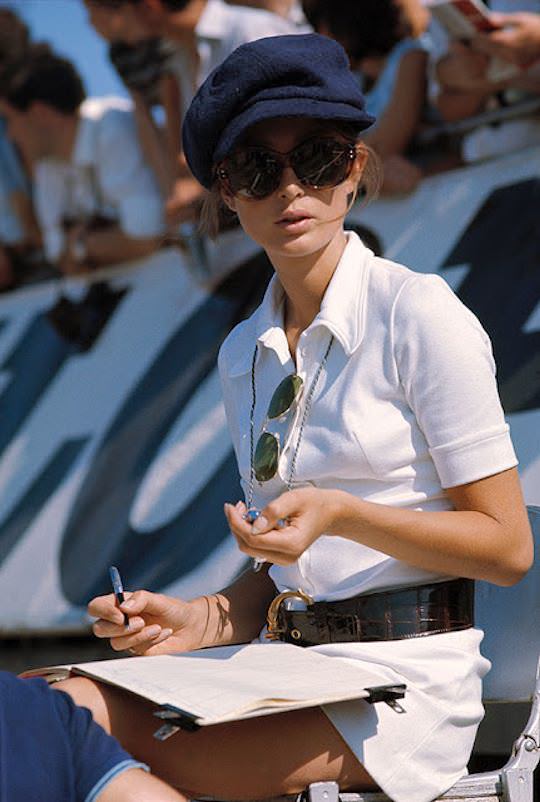 1. Quite simply, no one has ever worked a hat like her, before or since.
Here she’s timing her husband, Jochen, racing laps, in a little Greek fisherman’s cap. The hat may be all adorably androgynous, but look at that face—girlfriend means BUSINESS. I wouldn’t want to come around that track a second late, would you? 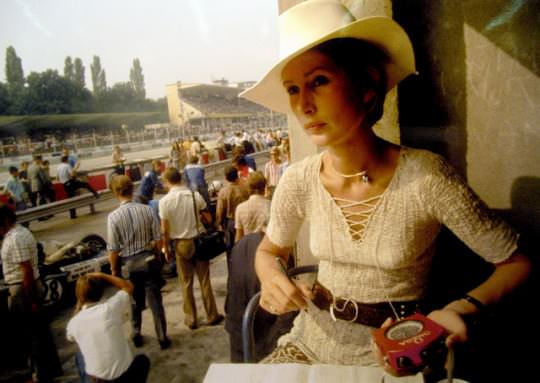 Via They Fly By Night

2. Nina can work the Superfly look, too.
I love her in this slick ’70s fedora. And check the timer in her hand—don’t be late on Nina’s watch, man. 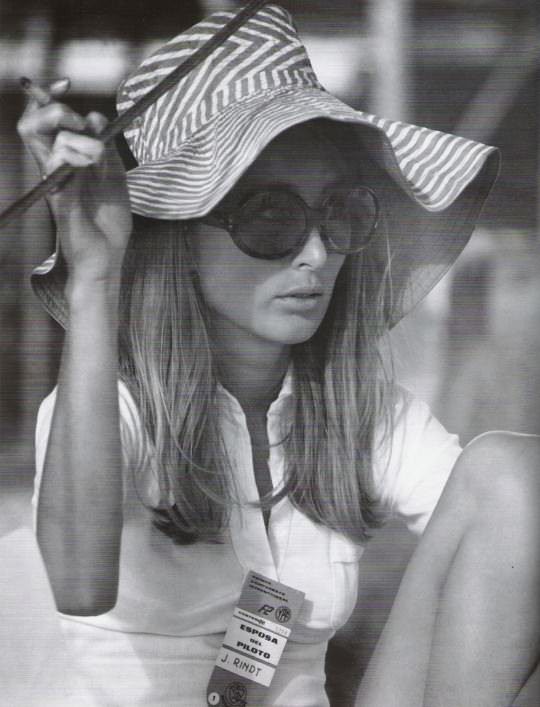 3. She can pull off a bit floppy sunhat.
Usually I’m not a huge fan of this look, because it reminds me of the goofy bucket hats babies wear at the beach. But somehow Nina makes even ugly baby bucket hats look amazingly chic, because she is magic like that. 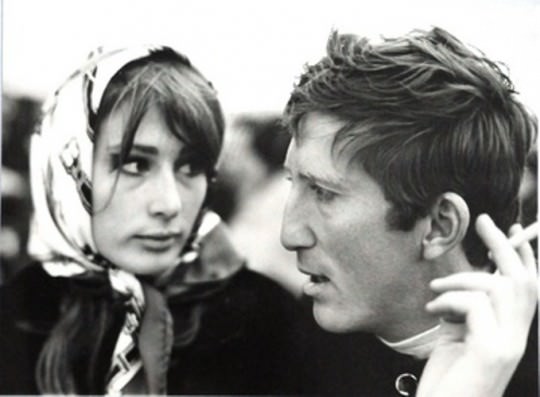 4. She is not defeated by uncooperative or greasy hair.
Instead, she throws on a headscarf and has her own little Audrey Hepburn moment. I like a lady who transforms dirty hair into fabulousness. 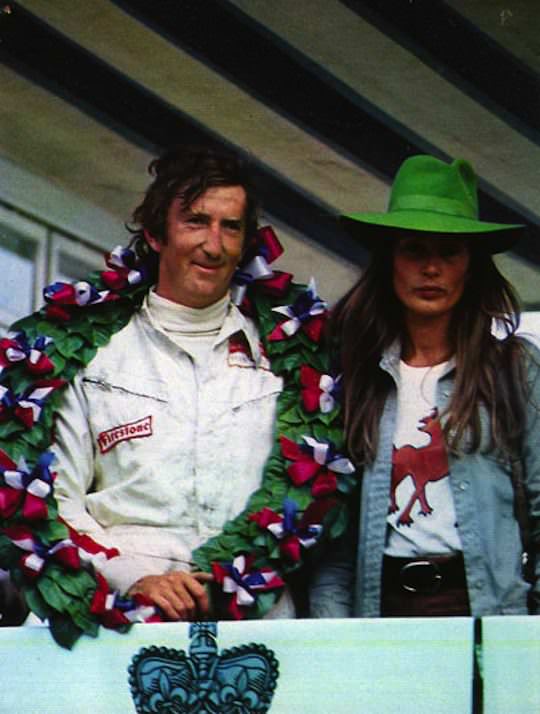 5. She understood the power of repetition.
None of us can afford to wear new clothes all the time. Instead of regarding that as a limitation, do what Nina did and think of that as your opportunity to create a signature look. She wore this acid-green fedora a million times throughout the 1960s. But instead of being like, “My god, woman, will you please buy a new hat?!” you’re like, “My god, woman, will you please tell me where you got that hat?!” I think the key is that it’s a really great piece, and that she wore it unapologetically and with so much style that it’d be hard to get sick of it. I think the lesson here is, find something you love to wear, and wear the damn thing out. You’ll be iconic in no time! This photo also brings me to another thing I love about Nina:

6. Girl had her bitchface down.
That photo above was taken on the podium at the Brands Hatch race track, as Jochen took the top prize at the British Grand Prix. Like, I’m all for being a supportive partner, but isn’t it sort of rad how Nina looks like she could TOTALLY NOT CARE LESS about this thing that is sort of a big deal? Here’s another stellar example of the bitchface:

Whether she was timing splits or receiving accolades from an adoring racing public, she was not afraid to spread some attitude around. As a person who spends approximately 90% of my time in public faking a smile when I’d rather be frowning vaguely, I really admire this trait in a woman. 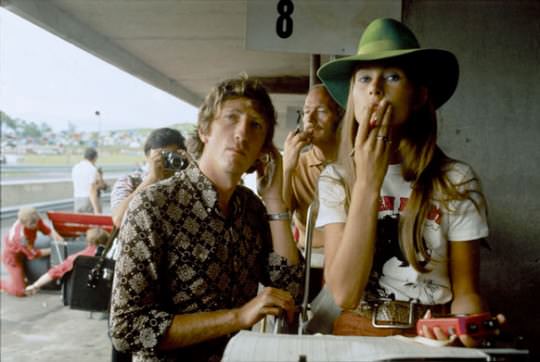 Via They Fly By Night

Here she is looking all cool and appraising, sizing up the competition at a race with Jochen. I’d probably look exactly like this if I had to sit around watching cars all day. 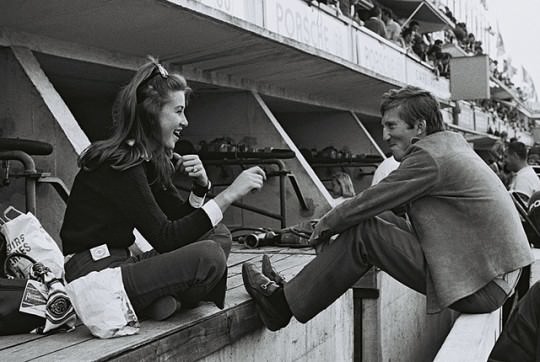 7. When she did smile, it was like the sun coming out from behind the clouds.
This is the great thing about having excellent bitchface—gotta keep those smile expectations low. And of course Nina’s grin here is extra cute because it’s directed at her dude. 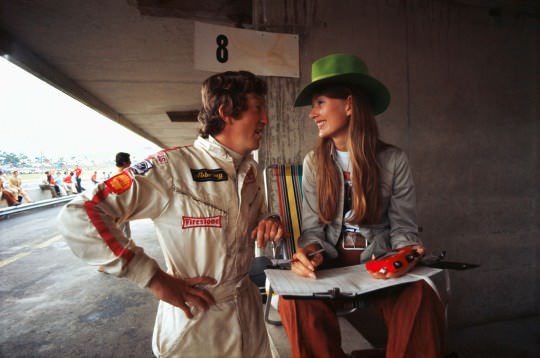 Like, seriously would you look at these two BEAMING WITH LOVE at each other. UGH STOP BEING SO ADORABLE YOU GUISE. Which brings me to the next thing I love about Nina: 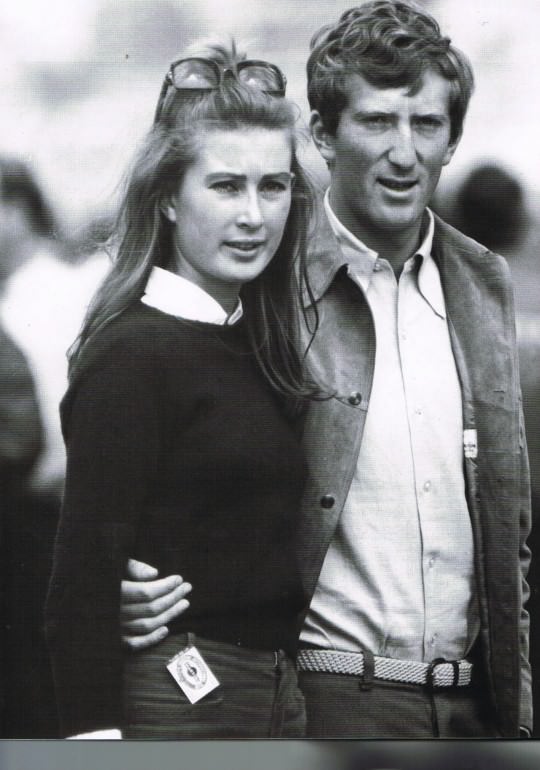 8. She and Jochen seemed to have had some sort of Paul Newman–Joanne Woodward love-for the-ages thing going.
Right down to the Ivy League vibe they have going on in this photo—Nina’s sensible sweater combined with those giant shades perched atop her head, Jochen looking all earth-toned and ruggedly handsome. It’s not often you meet a lady who can do both Superfly and ’60s coed well. Which leads us to… 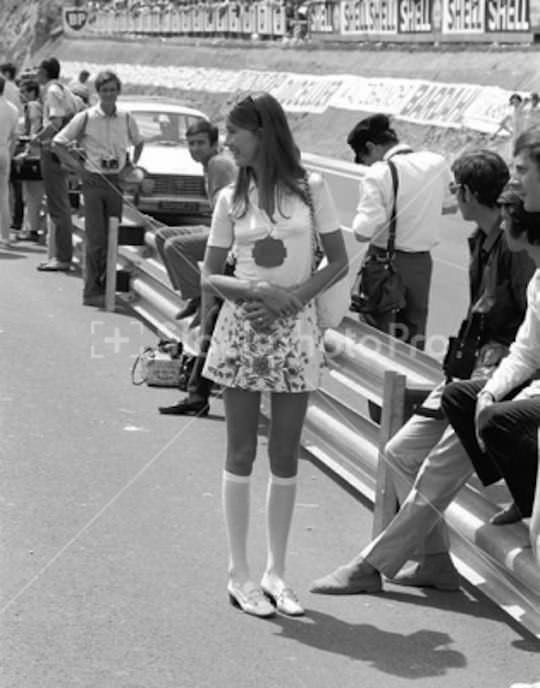 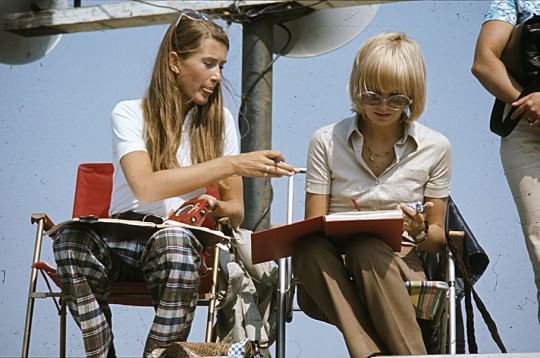 10. …but this woman can also work GRANDPA SLACKS.
Plaid and polyester are two of the last words anyone thinks of when they think about stylish pants, but somehow Nina makes it work. A glamour girl who can work retiree chic truly deserves a spot on our list of fashion heroines, doncha think? All hail Nina, the only fashion icon who makes me wanna throw on a floppy hat and a scowl. ♦