Riding in Cars With Girls

Style in our favorite road-trip movies.

Road-trip movies are one of my favorite film genres. Why? Well #1, I loves a road trip myself. #2, most of the time the people in the movie are, or fall, in love! #3, usually a lot of weird-ass shit happens. Add a solid soundtrack and we have cinematic gold! And if there’s FASHION? You better sound the alarm, because I WILL get obsessed with it. Here are a few of my favorite stylish flicks about people on the road (and some on the run!). 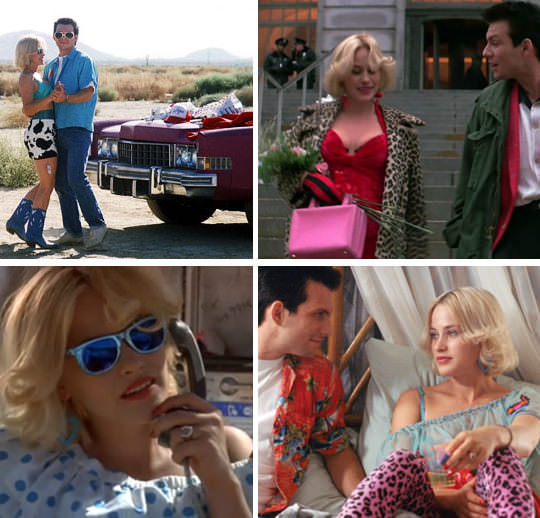 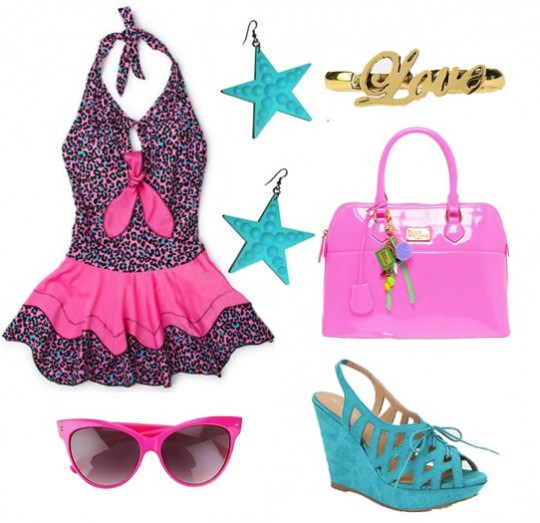 In 1993’s True Romance, comic-book-loving hunk Clarence (Christian Slater) falls for good-hearted hooker Alabama (Patricia Arquette). They quickly marry, but are far from living happily ever after when Clarence murders Alabama’s pimp accidentally grabs a bag containing stolen cocaine. The star-crossed couple, now on the run from dangerous thugs who want dem drugs, decide to hit the road to Los Angeles to sell the stuff. Now, I know this movie sounds WILD (because it totally is), but it’s also one of my favorite love stories. Amidst all the blood and bullets, it is SO ROMANTIC! Sigh…give me a second while I look wistfully outside the window, dreaming of my own CLARENCE AND ALABAMA TYPE OF LUV. It’s rare to find a character in a movie whose outfits are 100% drool-worthy, but Alabama, with her animal-print addiction, assorted girly colors, and cute accessories wins the award for having legit style in every single frame. If she were on a real L.A. vacation and not trying to dodge gangsters, we’d see her relaxing by the pool in this pink-and-aqua leopard-print bathing suit from Romwe. 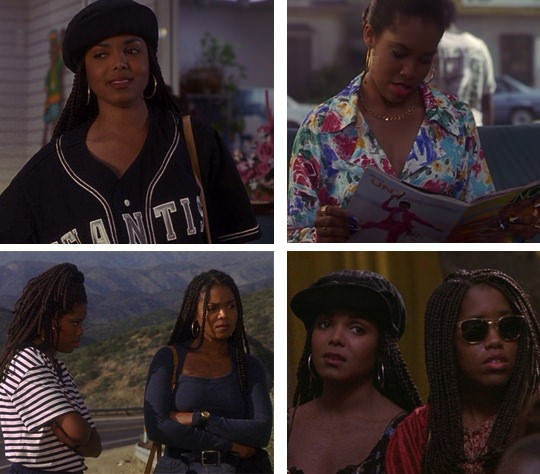 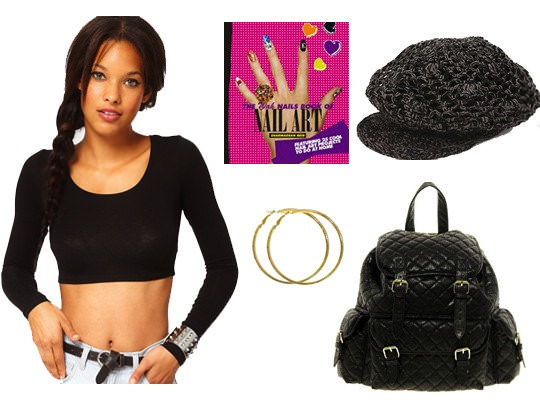 Poetic Justice (1993) paired Janet Jackson, as the pensive poet Justice (get it?), with rap legend Tupac Shakur, in his film debut as postman Lucky, on a road trip from South Central L.A. to Oakland in a mail truck. They don’t get along at first, but they eventually find they have a lot in common after all and start crushing on each other. Related side note: I have a framed photo of Tupac and Janet from Poetic Justice’s premiere that my friend won for me at the fair years ago. And fun fact: the poet Maya Angelou (who has a small cameo) wrote all the poems Justice recites in the movie. Justice’s outfits were the epitome of ’90s-woman casual: body-hugging tops, sports jerseys, baggy jeans, and long, boxed braids under a floppy newsboy cap. This look reminds me of all the cool girls from my seventh grade. Since the skinny-jeans trend is still oversaturating the denim market, the best you can do to copy Justice’s bottoms is to find a good pair of boyfriend jeans. Get a few different-sized gold hoops (one of my favorite eternally chic accessories), and don’t forget to have your nails on point, like Justice’s friend Iesha. This WAH book can help, but so will our manicure tutorials! 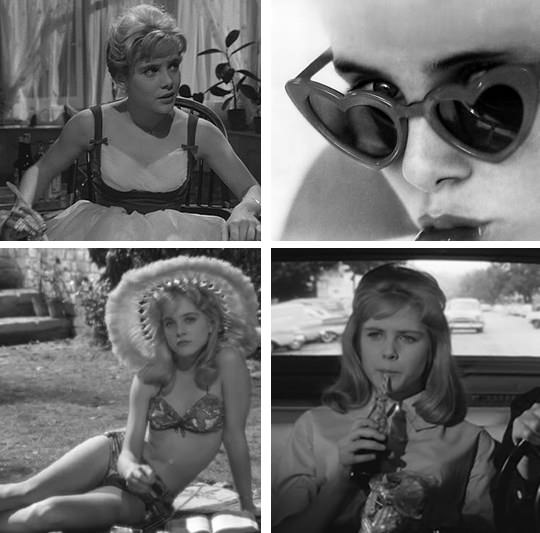 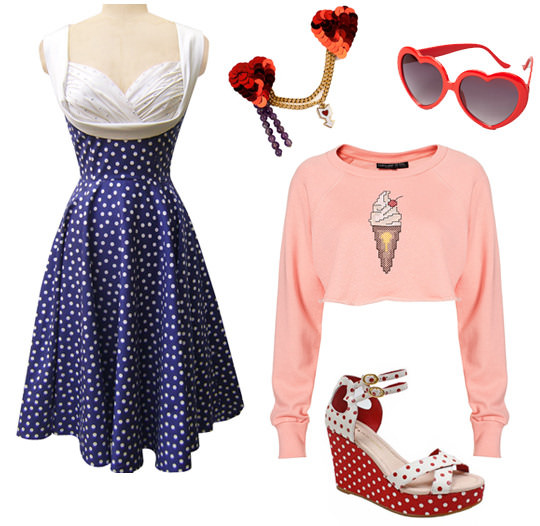 Lolita (1962), based on Vladimir Nabokov’s novel of the same name, is about a man named Humbert Humbert who falls in love with a young girl named Dolores Haze, whom he calls Lolita. Her mother, whom Humbert married just to get close to Lolita, dies in an accident, then Humbert takes Lolita on a road trip through America. Super creepy, yes, but this movie is a total classic and has inspired countless movies, songs, and of course, fashion. The heart-shaped glasses that you can find in almost everyone’s possession these days are ripped directly from the movie’s iconic poster. This Trashy Diva dress is similar to the one Lolita wears in the movie. Go crazy with Lolita-type accessories like the aforementioned sunglasses and this double-heart brooch from Motherland. 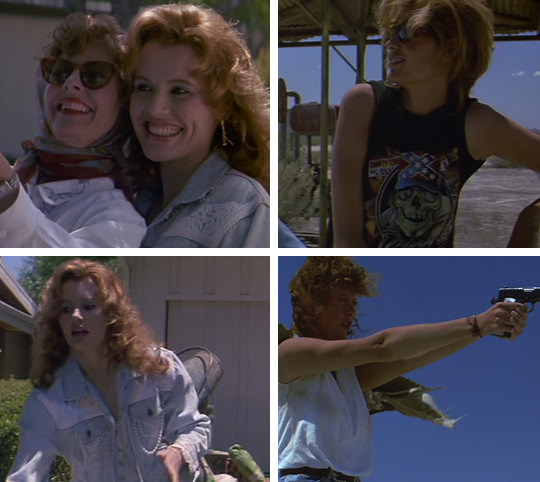 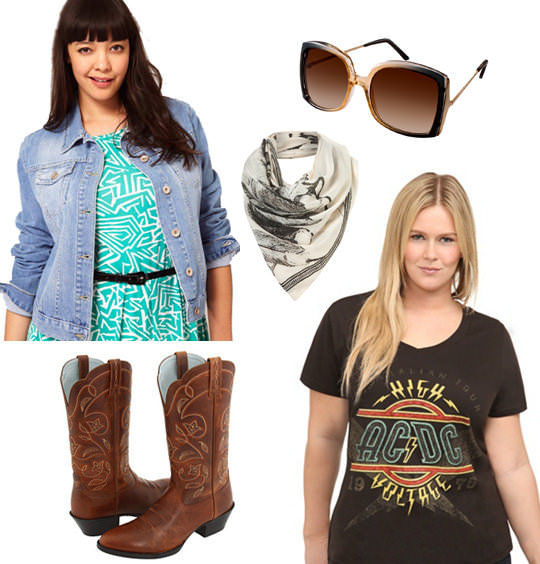 Thelma & Louise (1991) is not only my nickname for my boobs, but also an empowering movie about two friends who find themselves running from the law after inadvertently killing a man who tries to rape one of them. The movie starts out with Thelma (Geena Davis) as a bullied housewife eager to head out on a weekend girls’ trip with her BFF Louise (Susan Sarandon). Soon everything goes awry and the two vag-ilantes end up breaking law after law while seeking revenge against any other man that harasses them. As they cross states and commit more crimes, their uptight hairdos and fancy dresses disappear and make way for T-shirts, windblown locks, and dirty denim. Thelma starts out in a light-washed jean jacket with pearls strewn across the chest pockets (do I sense craftin’ time, baby boos?); by the end she’s sporting a sleeveless biker tee. Get your own T-shirt-and-denim-jacket ensemble at your favorite thrift store, and add a pair of big sunglasses for your own good-girls-gone-bad tribute. 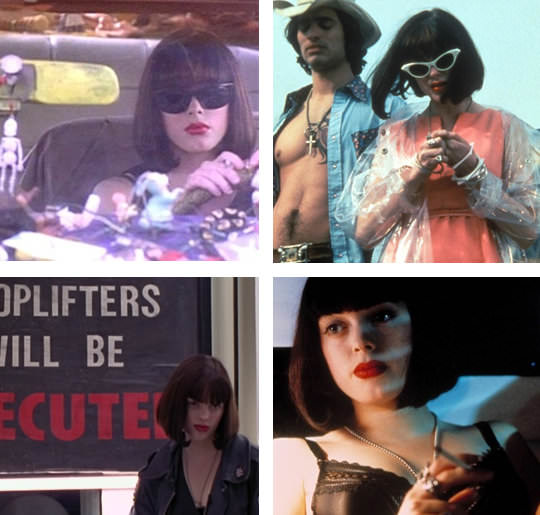 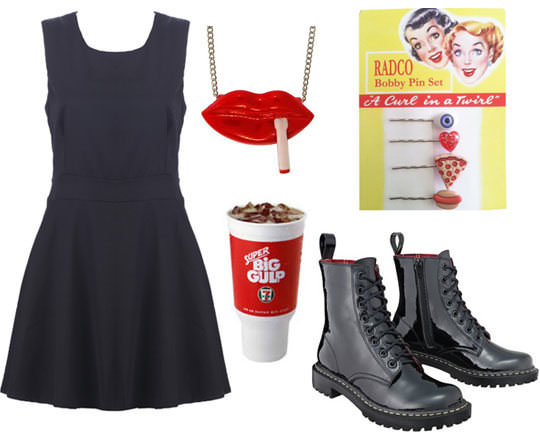 One time when I was a teen, I went to a party, and some dude I met said I was “like that chick in that movie The Doom Generation!” He was referring to Amy Blue, Rose McGowan’s character in one of my fave Gregg Araki flicks. I’m assuming it was because I was throwin’ my ’tude at him, but I did (and STILL do) take that as a compliment. In the movie, Amy goes on a road trip with two sexy menz, aka my dream. Just kidding, it’s way too violent and pretty gory, but also muy horny with lots of fun cameos (Parker Posey, Margaret Cho, Perry Farrell). How I LOVEZ it. Amy wears a lot of black, but jazzes it up with tons of jewelry. There’s lots of junk-food consumption throughout, so accessories resembling your favorite snacks are key to invoking Amy in all her convenience-store-queen glory. ♦