A horrifying tale of parental abandonment and lonely suffering! Just kidding; it worked out OK.

Friday Playlist: On the Road With the Winchester Brothers 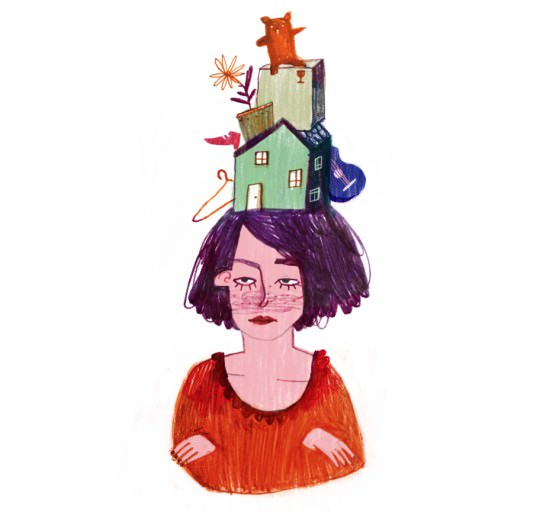 With a “Bye honey! Love you!” and a final wave, they were gone.

Some parents cry when their kid goes off to college. Some parents make an embarrassing scene and later have trouble coping with an “empty nest.” My parents high-fived each other and drove off.

I stood in the middle of a pile of everything I owned—boxes of bedding, clothes, shoes, one blue electric bass guitar—heaped in front of Pioneer Hall, my new dorm at the University of Minnesota. All around me, new freshmen were moving in, hauling boxes from minivans, tossing Frisbees, and yelling to one another.

I fought back panic. My parents had helped me move in the big stuff, like my desktop computer and a microwave, but when that was finished, the message was clear: Adult Life Starts Here—Move Yourself In. I was on the road to becoming my grown-up self, and the drive from childhood to this turning point had taken exactly five hours—the amount of time it takes to drive from Green Bay, Wisconsin (my hometown), to Minneapolis (where my college was).

It was time. I was the baby of the family, and I’d been a particularly mouthy kid. My parents were so done with parenting. They were thrilled to see me go.

As their tail lights disappeared, tears welled in my eyes. They didn’t love me. Everyone else’s parents were moving them in. The tears threatened to spill over. How was I supposed to get this stuff upstairs by myself? Who was going to watch my stuff outside as I hauled boxes up four flights of stairs? I DIDN’T KNOW ANYONE THERE.

I had just sat down on my giant Tupperware tub of shoes to have a good “no one loves me” cry when a boy in a Phish T-shirt walked by. He paused.

“Is that your bass?”

“That’s awesome. You’re awesome,” he said, pointing at me as if he was marking me for later.

And—I kid you not, and this is embarrassing—that’s all it took to dry my crocodile tears. Forgetting that I was an incredibly shitty bass player who only started playing to have something to bond over with my crush in high school, I perked up. That boy thought I was awesome. I was awesome! Who cared if I shouldn’t be judging myself by what others thought of me? I was off to a brilliant start at college. A guy I’d never even met before had just talked to me, which had never happened back home in Green Bay. I was clearly going to be a success.

So: what follows is a description of my first few days at college, when I was alone, without my parents or a group of friends, for the very first time in my life. Not a lot happened, but you guys, so much happened.

I managed to move everything upstairs in less than an hour. My new roommate, Cayla, had already moved her stuff in; she wandered in and out of the dorm as I unpacked. Cayla and I had emailed briefly in the summer after senior year, and…here she was in real life, standing in front of me: gross. A hippie. A real-life hippie, with dreadlocks and Birkenstock sandals and a Grateful Dead T-shirt. I was still deep into my Abercrombie phase; in my carefully faded red polo and pre-ripped jeans, I looked her over.

Cayla had posted art sketches of naked women all over her side of the room. She had a large brick of violently orange cheddar cheese in the fridge, and, as she was decorating her desk, I actually saw her pull out the cheese and take a bite out of it, and then put it back. She was gross and a hippie and possibly a lesbian (never mind that I had already experimented heavily with girls—I wasn’t a lesbian, for god’s sake, ew!!!!) and we were not going to get along. I really, desperately wanted to have a friend at college, and I had been hoping my roommate could be that friend, but Cayla and I were clearly too different. For crying out loud, she had a hacky-sack on her dresser. We were obviously doomed.

That was the first thing she asked me when we were finally alone on that first day, after her mom left and we had decided who got which bunk bed (I got the top).

Trying to be casual, I shrugged and said, “I don’t care.” Smoking was expressly forbidden in the dorms, but I understood it would not have been cool to say I minded—I minded a lot.

Cayla grinned and pulled a glass pipe out of her men’s corduroy pants.
Oh. Marijuana. She had meant marijuana.

We were going to be expelled on our first day of college. For the second time that day, I fought back panic.

Cayla packed the first of many, many (countless, really) bowls, got out a mini fan, and stood at the window, exhaling pot smoke and sighing. I lay on the top bunk, pretending to read. Pretty soon, Cayla wandered down the hall, knocked on some doors, and…suddenly there were five other kids in the room. Our dorm was coed, so there were boys and girls, sitting in a circle, passing the pipe around and getting to know one another. Everyone was extremely blasé about the fact that they were smoking an illegal drug.

Fake-reading on the top bunk, I watched them out of the corner of my eye. I felt left out; an antisocial who was failing at making friends on the First Day of the Rest of Our Lives. I climbed down the bunk ladder and sat with everyone. I was so nervous—here was my first real interaction with real freshmen my age, and, I was about to blow it.

The pipe was coming around the circle. I had no idea what to do. I’d never smoked pot in my life, and all of these kids were clearly old hands. Each person seemed to have been born knowing which little hole in the pipe to cover with their finger, and they expertly inhaled, held the smoke in their lungs for the “right” amount of time, then let it out without coughing. How did they all know what to do? Had they read a book I’d missed? Is this what people did at the “wild” high school parties I had never been invited to, even if I’d have been allowed to go, which I would not have been?

When the pipe came to me, I just passed it. My hands shook.

Eventually, it was dinnertime, and Cayla and I went down to the dining hall together, where she promptly split off from me and went to find the (enormous) group of friends she’d apparently brought with her from high school. I scanned the groups of rowdy kids in the cafeteria. Everyone was already in a group. When had these alliances formed? For the first time in my memory, I had no one to sit with.

Well. Who cared. I was an adult, and I could sit alone. I was brave. And plus, y’all, that first night? I know it was just a campus cafeteria, but…everything looked amazing. There were french fries and chicken patties and tacos and bagels and every kind of sweetened cereal imaginable, along with soda machines and soft-serve machines and waffle irons and a salad bar and fresh pizza. I didn’t know where to start. Unlimited pizza was such an unimaginable treat that I forgot my social anxiety and went to town, pausing only to inhale Mountain Dew in great, draining draughts.

Prior to that moment in the cafeteria, I had never had access to much junk food. My mom was the kind of mom who bought the natural-foods peanut butter, the sugar-free kind you have to stir the oil into. My sister and I were allowed to share one box of sugary cereal per month. And here I was, suddenly able to make the kind of food choices my mom had been trying to shield me from my entire life. Cap’n Crunch! Cookie Crisp! Cinnamon Toast Crunch! Sweet cereal and chicken nuggets became my go-to meals. A sophisticated palate requires sophisticated nutrition.