The summer after my junior year of university, I subletted a beautiful two-bedroom apartment with my friend Vauhini in San Francisco. I was 20 and interning that summer for the San Francisco Coalition on Homelessness, a nonprofit that works for the rights of homeless people. I had spent the prior winter working at a homeless shelter in Menlo Park and taking a class on poverty and homelessness in America. The initial exuberance of going away to college had worn off. Some of my peers talked about race and ethnicity and poverty like they were abstract concepts, and I guess for many of them they were. Others came back from their life-altering semester or year abroad in African or Southeast Asian or Latin American countries and talked endlessly about what they had seen and how they had been changed. I wanted everyone to come with me to this homeless shelter I spent my afternoons in and see that one didn’t need to travel thousands of miles to experience the devastating truth of the world.

I, too, came back from my summer in San Francisco changed. I could tell you about the people I met that summer, my own story of when I truly that there was so much wrong with this world and that the lucky ones, myself included, could go through life without ever really being troubled by it, but that story would take over the one I’m trying to tell, which is the story of how I spent my whole summer hanging out in the Tenderloin, the one neighborhood in San Francisco that is often coded as “gritty” or “rough,” the neighborhood that guidebooks always advise travelers against visiting, the neighborhood that is home to sex workers, teenage runaways, Vietnamese and Cambodian immigrants, homeless folks, people with all sorts of untreated mental health issues, seniors living in SROs, drug dealers, and in general, the kind of people that I shamefully realized I had been afraid of until I spent a summer hanging around them and talking and getting to know them at all hours of the night and day.

I would get to work at nine in the morning and not leave sometimes until two or three or four the next morning. I would go to Saigon Sandwiches on Larkin Street and order four or five banh mi—one for me, and a few for whoever else was in the office and hadn’t already eaten the free lunch that Glide Church delivered every afternoon. I would trek out to Tu Lan restaurant, a hole-in-the-wall Vietnamese restaurant on 6th street that was reportedly Julia Child’s favorite place to dine in San Francisco, to order imperial rolls on vermicelli. I would make it my mission to eat at as many Vietnamese restaurants and diners in the neighborhood as I could get to. I went to the ones without names, the ones with only Vietnamese names, the ones that looked awful from the outside and the ones who were even worse looking inside. There was one Vietnamese restaurant on Larkin that I would go to all the time after work for pho and summer rolls, and the couple who ran the restaurant would sometimes give me free Vietnamese iced coffee and sit down and chat with me.

A year later, after graduating from college, I moved into a sun-drenched apartment in the Mission district of San Francisco, where I did the same thing with Central and South American restaurants. On the weekends, I would go back to the Tenderloin and eat at some of my favorite restaurants from when I used to work there. To my surprise, most of the owners remembered me. “You’re that girl,” one of them said when I sat down and ordered a coffee. “You’re too beautiful and nice for this place.” But in my mind, it was the very opposite.

Now that I’m 28, now that most of my friends have real, salaried jobs, now that I have semi-mastered certain “adult” things like somehow managing to pay rent at the end of each month, and somehow remembering to feed myself AND sleep AND socialize with friends AND (sometimes) get my shit done, I don’t have a lot of occasion to hang out with homeless runaways in city parks. I don’t have a lot of opportunities to meet people outside of my socio-economic background. Almost everyone I know is a college graduate or heading for college. Almost everyone I know is comfortably middle-class or upper-middle-class. It can be so easy to be complacent, to not question our own insulated bubbles. 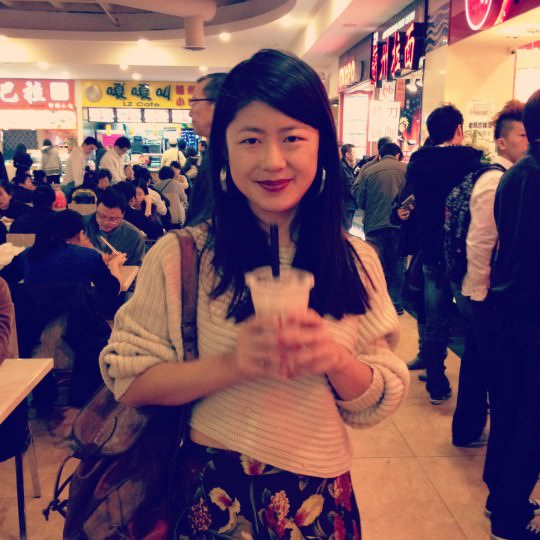 Me with some bubble tea at the Flushing Mall.

I think of my favorite restaurants of all time—shitty-looking hole-in-the-wall restaurants that sometimes didn’t even have a menu, that are often in neighborhoods that are considered “bad” or “dangerous,” which is just code for HEY BLACK AND BROWN AND POOR PEOPLE LIVE THERE—and I think of how those places saved me from being so smugly self-involved in my own privileged world as a college student who thought mostly about myself and very little about others. I think of how those restaurants were the sites of my happiest memories with my family. I think of how last year, when I lived in France, I would shop at this one Vietnamese grocery store on the outskirts of town, and the owner once hugged me when I went in there searching for kefir limes and galangal, and how I confided in her that I was broke and lonely, and she confided in me that she was unhappy in France and wished she had the money to take a vacation to visit her brother in Vietnam. I think of how much smaller my world would have been had I never dared to step foot into these neighborhoods and restaurants.

Not everyone can afford to spend a year abroad having “life-changing” experiences. Some of us have to or need or want to stay right where we are. Our culture valorizes the story of the plucky traveler who fearlessly travels to foreign lands only to come back transformed, but let’s talk about the land we already live on. Let’s start talking about the underappreciated parts of our cities and towns, the streets or neighborhoods that adults warn you against, the places that are maybe are not the exact coordinates of your home turf, but are surely a home to others, and let’s talk about how at the center of every home is food. Let’s talk about how the most exquisite food often is served on the most humble of plates. And let’s consider that maybe the neighborhoods we are supposed to stay away from, the places we are not supposed to see or experience, are, in fact, gateways that can open up our world until it becomes unbearably, beautifully vast. ♦