I am a smart person. Why couldn’t I learn how to do this one thing that stupid people do all the time?! 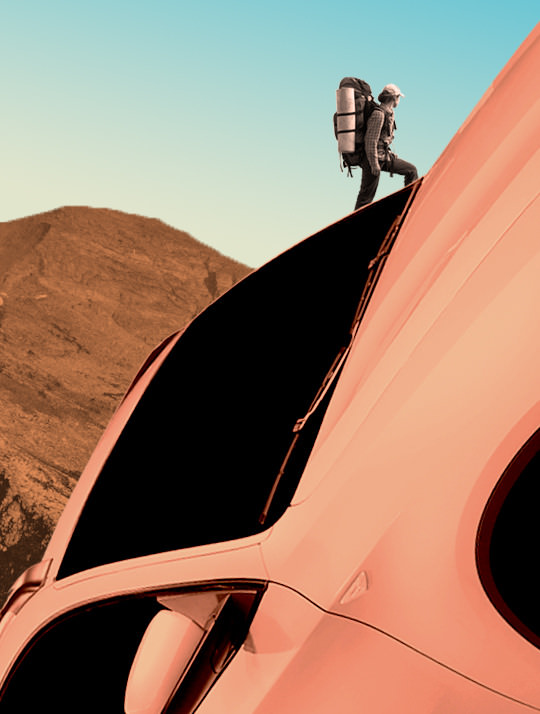 When I turned 16, it was time to get my learner’s permit, the thing that lets you drive in a car during daylight hours, accompanied by an adult with a driver’s license. In the state of New Jersey, where I live, to get your permit you have to pass a driver’s education class and a written test, and practice driving for six hours with an instructor from a driving school. I had already passed my driver’s ed class and my written test (which I barely studied for). All I had left was my two days of driving lessons, three hours each, with an instructor.

I was one step closer to a full-on driver’s license! Finally, I would be able to drive anywhere I wanted to! On my own! I was completely confident that driving would be no problem for me. Driver’s ed was the easiest class I had ever taken, and I figured driving would be easy too for that reason. I hopped into the seat for my first lesson with my instructor totally ready to ace everything: turning, parking, reversing, you name it!

What happened was that I realized how much I did not know about driving. First of all, I thought that you used two feet to drive, one for the gas and one for the brake. Also, I kept getting my left and right mixed up. I think at one point I drove on the wrong side of the road into oncoming traffic? I can’t remember. I do remember my instructor saying (in a long, monotonous drawl) something along the lines of “You need to really…pay attention to everything.” To everything?! I thought I was! Also, wasn’t that just the equivalent of saying, “Hazel, you’re really bad at this.”

“Pay attention to everything” is not a useful piece of criticism, it’s just common sense. Was he implying that I didn’t possess common sense when it came to driving? Yes, he was. My confidence crumbled.

I did get my learner’s permit, because I did everything needed to get it (your hours with the teacher aren’t a test, it’s just practice), but I didn’t end up getting my license until I was 18, a year after I was technically allowed to. I didn’t get my license at 17 because I was scared to drive. I was scared to practice at all, even on quiet streets, with a parent in the car. It wasn’t that I was afraid of people killing me (though I used that excuse a number of times to explain why it was taking me forever to learn); it was just that I was afraid of failing.

Why keep trying at something you know you’re really bad at? That was my logic when it came to driving. I was also embarrassed that it was taking me so long, especially when everyone in my entire grade could drive. Friends and relatives were always nagging me about driving. I kept making up excuses, like “I don’t really need to drive anywhere that often,” or “I’m going to college in the city, so I won’t need to know how to drive,” or just “A car is a death trap, did you know that?!”

At the beginning of my senior year of high school, my parents put their feet down and told me I needed to learn to drive. At first I would drive a bit with them, but then I would do something wrong, and even the tiniest bit of perfectly acceptable criticism, like pointing out a crooked parking job, would drive me off the edge. If I flubbed any tiny thing, I didn’t want to drive at all anymore. I told me parents, “If you want me to learn to drive, you literally have to force me.” Then they would try to force me and I’d get really stressed out and make more excuses. I was like a child!

People kept telling me that driving was so easy, and that I would get the hang of it in no time. This didn’t help; it made me more stressed out! I like to be challenged, but when something so simple is a challenge, it doesn’t really induce confidence. It was like if someone was teaching you how to braid hair and for some reason you couldn’t get it. Wouldn’t you feel stupid? Well, that’s how I felt. I felt like someone was teaching me to braid hair and I couldn’t get it!

My dad ignored my baby-ness and started taking me out more and more to force me to drive. Slowly, and crankily, I learned. It was not easy for me. In fact, it was the most frustrating experience of my life, because simple driving actions that came naturally to my friends and my parents were weirdly difficult for me, and I wasn’t sure why. I am a smart person. Why couldn’t I learn how to do this stupid thing that the stupidest people I knew could do? Was I dumb?! Not learning how to drive became about more than just not physically being able to do this thing correctly, it became a symbol for my overall stupidity. I got really insecure about it, and then my insecurity embarrassed me. Trying to drive a car felt like trying to fit a square peg into a round hole, day after day. Giving up seemed like the only option.

One afternoon my dad was trying to teach me how to reverse out of a parking space. He told me several times how to reverse; he even drew a diagram for me. I could not do it. I turned the steering wheel the wrong way every single time. We must have spent five hours in the parking lot. Eventually I just started sobbing and wailing, “WHY CAN’T I DO THISSS I’M SO STUPIDDD.” Then my father laughed at me…and I laughed too. He was laughing because he knew that eventually backing out of a parking space would be easy for me. And he was right! Now, it is really easy. And so is driving down a street, merging onto a highway, and being aware of other cars and signage at all times with ease.

My turning point was the moment I finally got the hang of driving in reverse. Suddenly, I felt better about my abilities to learn things—all kinds of things! Driving was no longer this square-peg-round-hole exercise in futility; it became a beautiful story of my being able to learn things, even when they take a long time. It was like, “Oh, wait, I definitely just did this thing that I couldn’t do right for the past few weeks!” How could I call myself a lost cause when it came to driving when I just aced driving in reverse? This happened every time I (finally!) did something right behind the wheel, whether it was slowing down at a red light without screeching the car to a halt, or remembering to turn my headlights on at night, or merging without someone’s honking at me for crossing over prematurely. Practice really did make perfect. I just had to drive for a really long-ass time to get things right, and when I did, I stopped feeling like an idiot and more like a very normal person who just needed a little bit more time on the road than the usual student driver. The only thing I’m still a little shaky with is parallel parking, but I passed it in my driving test. Did you hear that, readers?! I passed my driving test on May 1, 2012. And my instructor complimented my driving! I have a driver’s license!

Seriously: I really thought I could never learn to drive. It was just this thing that I couldn’t learn, for some strange reason. But that “strange reason” was really my fear of failing. When I wasn’t immediately great at it, my confidence faltered, and I wanted to give up like a baby. Tackling my fear of failure when it came to driving helped me realize that I can’t be such a princess and just give up so on something that isn’t immediately working for me—even if it’s something that comes easily to literally everyone else in the world. Next time I’m confronted with something that’s harder than I thought it would be, or want it to be, I won’t try to avoid it. I know I have to be patient with myself, and keep practicing, Even if that means practicing my still-currently-shitty parallel parking 800 more times before I get it right. ♦