Baldies, bangs, and all kinds of bags.

Hi guys, my hair is full of frizz and undefined curls and has cosmic volume, so I was thinking about shaving my head after finishing high school, but the possible reactions of my friends/parents/classmates scare the hell out of me. What should I do? Will I look like a boy? Will guys find me more unattractive/weird? Or should I just shave it and sing “Bad Reputation” whenever I feel sad? –A., Brazil

Get some clippers and let that fur fly, girl!!! If you’re going to shave your head, now is the time to do it. Why? Because you’re young and free, and you don’t have to worry about adult things that a drastic hairstyle (or lack of one) might hinder, like jobs or impressing people in suits. Now is the time to go WILD and SHOCK (and ROCK) the world with some healthy rebellion in the form of a li’l snip-snip. But I am going to be real witchu. Yes, you will most likely get some stares, comments, and questions (OMG what happened to your hair?!?!), from people in your inner circle and strangers who lack tact. Prepare yourself for this. When I was a teenager, I chopped off all of my locks for a short, spiky, boyish haircut. My mom wasn’t particularly happy at first, and people said shit to me. I remember my stomach turning with regret. But after a couple of days, I settled in with my new look and didn’t give a shit about what people thought—I KNEW I looked cool. 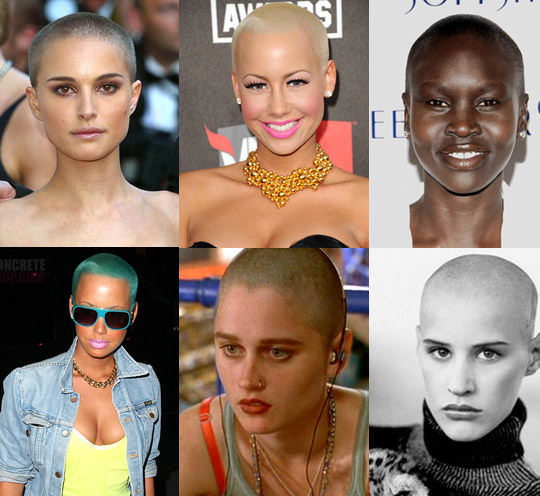 When I met my best friend a few years ago, she had a shaved head, and I thought she was such a babe. Look at all these hotties in the collage above! Now imagine how completely liberating cutting off all that hair will feel. Your face will look even more striking. AND THINK OF ALL THE MONEY YOU’LL SAVE IN HAIR PRODUCTS! (You can use that as a witty comeback if someone asks why you did it.) If you do decide to go for it, I hope you make a soundtrack to play during the ritual. Definitely gotta put “Bad Reputation” on there, maybe some “Eye of the Tiger,” and a lot of Beyoncé! Remember, when it comes to rocking ANYTHING, it’s all about that confidence, babe. And now I shall leave you with a final touch of inspiration: Robin Tunney’s infamous head-shaving scene from Empire Records:

I have really, really terrible bags under my eyes. All day, every day, even if I get the best sleep in the world, they’re still there. I’ve started using more concealer/foundation, and it’s working a little bit, but I’d much rather find a long-term solution, or at least something to make my eyes look healthier. The problem is, right now I am a poor student with no money for nice things, so I’m just wondering if you have any tips that are cheap/natural, or should I just save up and get some awesome product that you recommend?

On the subject of bags under your eyes, there are a lot of old wives’ tales—a cold spoon over your eyes, cucumbers, etc.—but I don’t put stock in them. Sometimes those bags are just hereditary (sorry!!!), and a lot of sleep won’t change the situation. So concealer it is—but not heavy-duty, cakey concealer. That will settle into your skin and look reptilian. And not illuminating concealer, or at least not by itself–it tends to just highlight the fact that you’re hiding something, and sometimes it doesn’t provide enough pigment to actually cancel out the darkness. It’s best to color-correct. Since the bags tend to have a blueish hue, use a salmon shade of cover-up. Look for camouflage concealers. This one from Coastal Scents is cheap and good, and this one from Make Up For Ever comes with a multitude of different shades that you can mix and match to suit you. A very popular one is the Eve Pearl Salmon Concealer, and the hype is well-deserved. For a student budget, the Coastal Scents concealer makes the most sense, but if you are going to invest, I suggest Eve Pearl. With concealers and foundation, it can be hard to find a shade and a formula that suits you, and they have bi-annual sales, so you can wait until then to swipe that one for half the price. I hope this helps! –Arabelle

I have been looking for a cute backpack for about a year now, and I still haven’t found anything that fits my ridiculously heavy load and doesn’t give me a hernia. I carry about two textbooks, two notebooks, three folders, and a few miscellaneous things as well. I have found plenty of really cute bags that are in my price range (under $60), but they don’t fit all the things I take with me. Help would be appreciated :) —Marian

Like you, I had a heavy backpack load all throughout high school, so I know how important it is to find a bag that fits everything! Luckily, there are some really cute bags out there that are perfect. 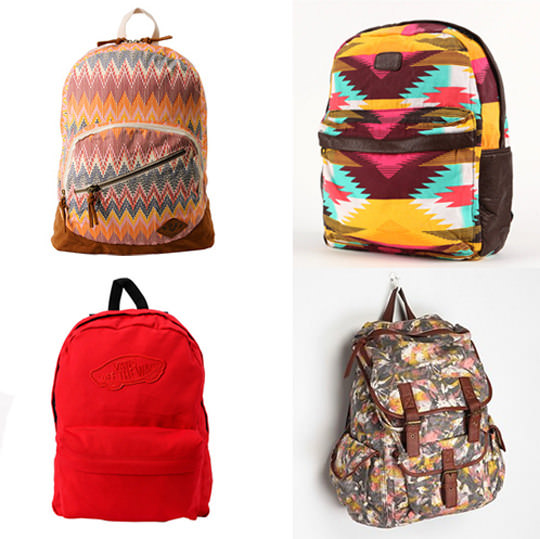 In my experience, skate and surf brands like Vans, Billabong, and Roxy always make really cute backpacks in great prints that ALSO hold your stuff. (That Billabong bag is huge!) Stores like Tilly’s, Zumiez, and PacSun have a great selection all year round, and they cater to boys and girls. When you’re shopping online for a bag, make sure it’s about 16 inches long and at least six inches wide. Rucksacks that don’t zip but have snap closures are something to stay away from. The heavier your load is, the more those are likely to spontaneously open. It’s better to get a backpack that zips. And, of course, the more pockets the better!

Don’t forget, you can make any bag adorable with some DIY magic! Try getting a JanSport Superbreak bag in a cool color and then personalizing it with cute patches, buttons, and pins! JanSport is great because they come in a ton of colors and are sold in so many stores, and if you go to their website and hit “What’s It Fit?” for certain backpacks, it will tell you! Hope this helps you on your journey to finding a cute (but practical) backpack! —Hazel

I really want to get bangs, but I’m not sure if they will look good with my face. All of my friends say that I’ll look bad with them. Should I listen to my friends, or should I just do what I want?

Girlfriend, lemme tell you something: when it comes to asking friends for their opinion on things like that, sometimes it’s best to…not. Yes, most of the time your friends mean well, but in this case, they are just letting out one BIG SAD FART NOISE by making you insecure and raining on your goddamn bangs parade. You feel me? Now, I have had bangs for the past eight or nine years. One time, an asshole (EX)friend told me to grow out my bangs, because they were “too trendy.” What the shit was that? Around the same time, another one convinced me to grow them out, and I think it was because he liked girls with side-swept emo bangs. Stupid me listened to this commentary, and now I basically hate all pictures of me from that tragic Year Without Bangs. How dare I let these people dictate how I want to style my luscious locks!?! 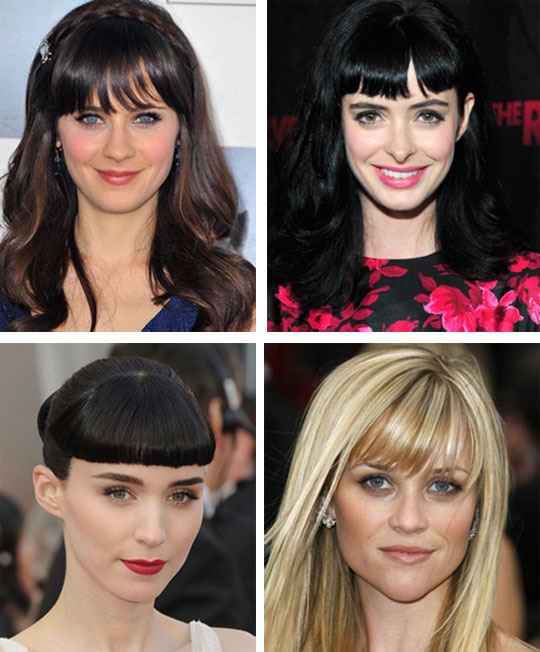 What I’m saying is: who cares what your friends think? They aren’t the ones getting bangs. If you’re worried about how you’ll look, I might suggest starting out with longer bangs (like Zooey and Reese), and take it from there. And if you yourself don’t end up liking them? No sweat, sisterdude. They will grow back! And you can clip them to the side, spray them back, or flirt with some headbands in the meantime. But I bet you are going to look cute as hell. And make sure to carry around a switchblade comb everywhere you go to keep that fringe in check!

If you have a style/beauty question for Marie & the other Rooks, please send it to [email protected].