Or: Why I get nostalgic when I smell cow manure.

Riding in Cars With Girls 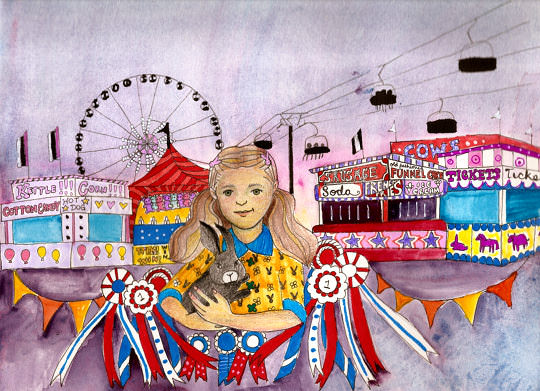 Growing up amongst cornfields and cows in rural Ohio, I didn’t have much entertainment. But once a year, something happened that thrilled me, consumed me, took over my days and nights for an entire magical week: the county fair. At the fair, our whole county came together to ride roller coasters, eat corndogs, and watch a bunch of cars crash into each other (also known as a demolition derby). And of course, to show off our farm animals.

For most people, the county fair is at most a day’s diversion—a fun place to take your date and ride the tilt-a-whirl. But for me, the fair was a way of life. You see, there are two parts to these sorts of fairs: the midway, with rides and games and food and a grandstand for events, and the barns, where the agricultural and animal contests take place. In my opinion, the midway is just there to make money. The barns are where the real action happens. At my fair, nearly every one of those animals was owned by a kid or teen who had spent a year or more raising their cow or goat or pig in hopes of winning a Best in Show ribbon. For these kids, the county fair represents the culmination of a year of hard work, and it’s INTENSE.

Generally, these kids are part of 4-H—a youth program kind of like Girl or Boy Scouts but more into cows than camping. The hardcore 4-H kids came to the fair with their own livestock or horses, but my family’s projects were tamer than most: my brother raised rabbits and I entered creative-writing competitions. Non-animal projects, like my writing or my friends’ sewing projects, were kind of like a science fair, but with more structure. You’d have to follow a bunch of steps in a guidebook (in my case, they were writing prompts) and then complete one large project. Then you’d go to an interview or competition to get judged, and if you were lucky, you’d make it to state fair! (I made it there once. I lost in the end, but how many people can say they competed at the Ohio State Fair? A lot, actually. But it was still worth it!)

To outsiders, the animal section of the fair must seem pretty mundane. You’ve got your cows in one barn, pigs in another, and they’re all just there to look cute, and, you know, eventually be food. But each pig represents the hopes and dreams of one 4-Her who has put a year of food, shoveling, and training into their project. At the fair, they’ll have a couple of chances to be judged. Once for showmanship, where they have to walk their animal around a ring and show the judges that they can hold and lead their animals properly, and that they are knowledgeable about their animal. For sheep, this means wrapping your hands around their necks and leading them around by the head (trust me, this is hilarious to witness). For rabbits, you have to flip them over and do a complete health check in front of the judge, including “sexing” (checking the genitals to learn the sex). These sorts of things are completely normal for 4-H kids, but alarming or even horrifying to outsiders, especially if you happen to witness a turkey show, in which birds as large as a child are casually dangled upside-down like it’s NBD.

The other competition is even more important—the judging of the animal itself. Winning Grand Champion here means that you will go on to the state fair and catch high price at auction. There is heavy competition, and sometimes sabotage. One year, someone let a few of the top pigs out of their stalls in the middle of the night, spray-painting them and letting them fight. Luckily the animals weren’t hurt too badly, but this event spurred the 4-H parents to start a neighborhood watch, patrolling the fairgrounds by golf cart. And sometimes the parents got too competitive, like the time an angry one tried to punch out a judge, but ending up swinging at my friend’s father instead (that one is a legend).

At the end of the week, most of the animals will be sold at auction. I, personally, could not do this. These kids learn early on that most farm animals are destined to end up on someone’s plate, and so they approach their projects as farmers, and not pet owners. I’m now a vegetarian, but I have the fullest respect for these 4-Hers—they learn from a young age where their food comes from, and put much more thought into it than most adults.

Even though I didn’t raise animals, my favorite part about being in 4-H was still the county fair. Every year we would camp on the fairgrounds, spending an entire week living 24/7 at the fair. For a child, it was the ultimate dream: a whole week to play with animals, eat junk food, and own the midway. I relished “barn duty,” when people from our club were assigned to sit at the barn and tell other kids not to stick their fingers in the cages. I became known around the Small Animal Barn as the tiny girl who carried around the huge rabbit for kids to pet.

The magic didn’t die as I got older. When I turned 13, I was eligible to join the Junior Fair Board—a group of teens who ran the animal section of the fair and all its events. I wasn’t entirely sure what they did—I just knew they walked around with matching shirts and nametags, and the people who were REALLY INTO 4-H tended to join.

I was REALLY INTO 4-H. But I was intimidated by the responsibilities and the older teens on the Fair Board. If the fair was a high school, these would be the popular kids whose names everyone knows and who seem to star in every sport and run every club. And I was the Tiny Rabbit Girl.

And we had to have an interview, just like a real job, with the adult supervisors before we could get in. I’m shy. Really shy. This did not sound fun.

But my friend Jessica wanted to join, and my parents insisted that I at least sit in for the interview before deciding whether I wanted to do it. So I did, and I flubbed it up magnificently (“What are three words that describe you?” “Um… creative? And…that’s all I’ve got, sorry.”).

But I made it in (turned out that the interview didn’t mean anything). And suddenly, I wasn’t just a random girl who hung out in the Small Animal Barn. I now had a purpose at the fair. I was going to MAKE THINGS HAPPEN.

It turned out that the Junior Fair Board really did run everything. They hired the judges for the animal competitions, bought the tiaras for the Fair King and Queen, and worked with the local newspapers and television stations to make sure our events got coverage. It was kind of exhilarating to be part of a group with real power. It was my first time witnessing teens making grown-up decisions, and I realized that I didn’t have to be Tiny Rabbit Girl anymore.

I don’t remember much about that first year, other than our trip to Columbus for the annual Ohio Fair Managers Convention. Being the youngest people there, Jessica and I ended up rooming with one of the chaperones, but that was OK, because we were at an actual professional conference. It all felt so grown-up. There were conferences and a trade show, which featured boring salespeople alongside animals in cages (sad) and a clown who could tear phone books apart with his bare hands. The conference itself featured sessions like “Dealing With Difficult People” and “Preparing for West Nile virus.” We filled our heads with ideas for next year’s fair, grabbed a ton of free goodies, and didn’t get any sleep. Interestingly, it turned out to be EXACTLY like the grown-up conferences I would later attend, except that the teenagers were better organized than most of the adult groups I’ve worked with. Teens always budget time for lunch.

Eventually, I became disillusioned by the fair. I was into Fair Board—really into it. I remembered how much fair had meant to me as a kid, and I wanted to make sure everyone had as awesome of an experience as I did. But not everyone was there for the same reason. Some people wanted to hang out with their friends. Some just wanted the cool staff T-shirts and Columbus trip. But we had a job to do, and I was endlessly frustrated by the dysfunction within our board.

My last year on the board was the worst, with a majority of the group dropping out. We were supposed to take two shifts each in the Junior Fair Board office, to answer phones, pass out forms, and help people with their problems. Some people just didn’t sign up. Others signed, but didn’t show. One girl didn’t show up to her opening shift, and when we finally reached her by phone, her excuse was “I was sleeping and I don’t feel like it.” And there was nothing we could do, because these people were volunteers.

It was really, really frustrating. I spent hours manning the office all by myself, until our adult supervisors kicked me out and told me to stop being a hero. I got two contradictory lessons out of this experience: (1) Not everyone will care as much about certain things as you do. If it’s so important to you that you’re willing to work harder for it, then go for it, but try not to waste your energy on being angry and resentful. It’s not going to change anyone’s mind, and it will just make you suffer more. (2) Sometimes you just have to give up trying to make everything perfect. When you get your first job, you’ll be surrounded by both slackers and hyper-competitive professionals. The best place for your sanity will be right in the middle. Everyone resents the slackers, but if you pick up their slack, you’re making it easier for them to keep doing nothing.

I may have become disillusioned by the fair, but I still loved it. I loved waking up to roosters crowing and cows mooing. I loved spending my days sitting in a barn teaching cute little kids about rabbits and llamas. I especially loved being the person that others would turn to for advice and help (possibly related to my enjoyment of retail). I now work in an office far from the farm, where people work together and get things done, but to this day, I get nostalgic when I smell cow manure. Summer just isn’t the same without a trip to the fair. ♦