Why Can’t I Be You: Carrie Brownstein

In which we learn how to be a rock star, writer, comedian, and all-around gift to humanity. 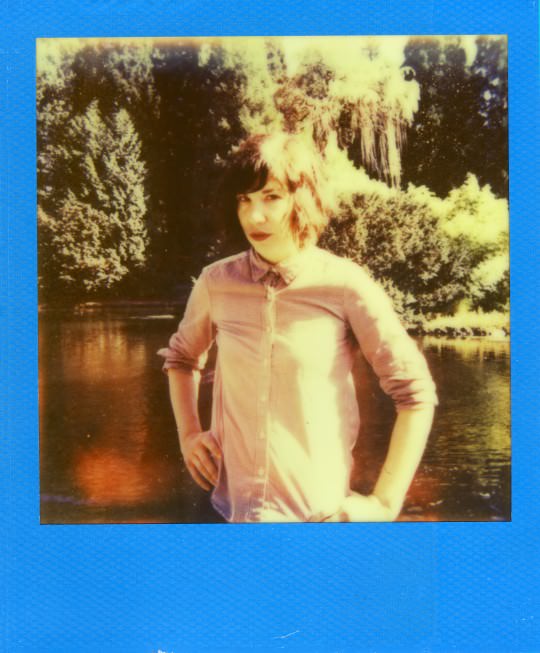 Carrie Brownstein is kind of three Why Can’t I Be Yous rolled into one, because she kills it on so many levels. She’s a rock star (most recently with Wild Flag, before that with Excuse 17, Sleater-Kinney, and the Spells), a writer (formerly on Monitor Mix, her NPR music blog; currently on the sketch show Portlandia, which she created with Fred Armisen; and future-ly of a memoir), and an actor (in a few movies, including Miranda July’s Getting Stronger Every Day, and of course on Portlandia).

She grew up all over Washington State, starting in Seattle and making her way through Redmond and Olympia before winding up in Portland, where we met up with her while we were on our road trip. We talked while we ate a gigantic breakfast (and Tavi experienced an important milestone in life; more on that later). Carrie was incredibly generous with her time and her knowledge, and we thank her for that.

ANAHEED: When did you tell your parents that you wanted to be a musician for a living, and how did they react?

CARRIE: When I was 15 or 16, I decided that I wanted to get a guitar. By then I had gone through a lot of phases, just like any teenager. My interests were constantly changing, and I think my parents, very wisely, thought that investing in musical equipment wasn’t the best way to spend their money. So they asked me to buy my guitar myself. There’s something about when you’re asked to do something on your own that changes your relationship to it. Because then you have something to prove—which is a really good motivator for any art or creativity. That’s actually the hardest thing to maintain, I think, the more you do something—always resetting yourself to having something to prove. Playing guitar was the first thing where I had something to prove to my parents, but mostly to myself. Like, “I can stick with this.”

I didn’t think of it as a career or a job until probably my first or second year of college, when I remember telling my dad that I was going to take a spring quarter off to tour. That was really the first thing that seemed threatening to my parents, like it was going to veer me away from what they perceived as the proper course of action: you go to college, you graduate. I guess sometime in the middle of college I thought, about music, This is actually what I care about. This is the most healthy version of myself, the most dynamic version of myself. I’d never felt that way in connection to other pursuits. But I think my parents continued to think of it as a hobby for much longer than I did.

I think it’s scary to imagine yourself doing something creative as a job for a lot of people. There’s this volatility to it, whereas other careers—even though it’s an illusion—seem like they might be more stable, even though really nothing now is stable! But I did finish college.

ANAHEED: What were you studying in college?

CARRIE: I was doing sociolinguistics, which was highly esoteric subject matter. [Laughs] It’s basically the relationship between language and society. I was doing a lot of discourse analysis—studying computer-mediated discourse, the way that people communicate online and how that changes power dynamics. It was pretty interesting.

TAVI: Do you think studying that kind of communication helped you with writing for Portlandia?

CARRIE: I think so. I’ve always had an interest in the minutiae of social dynamics and how people perform at relationships—the way couples kind of perform at being couples for an audience, or even to themselves. There’s who they are, and then there’s who they imagine themselves to be, which will sometimes manifest itself in conversations. Like when you hear people talking a little bit louder, and you realize, Oh, this is a performance. Studying the way people talk manifested itself in Portlandia a lot, because a lot of what Fred and I do is to look at the ways people communicate and try to get down to the most essential but also the most absurd part of that.

TAVI: Many of the girls we’ve met on the road trip are about to go to college, and a lot of them want to study something that they’re interested in, but that isn’t directly related to a job of some kind. But I feel like that is still helpful.

CARRIE: I really think it is, because, first of all, studying something that you’re interested in—that’s what you’re going to retain. I think of all the subjects that I wasn’t interested in, and I haven’t retained hardly any information from those classes. I think everyone feels this way—they can’t believe how much they know about movies and records and actors and fashion, but then you can’t recall poems or historical facts nearly as well. So you might as well study something that you already love, because then you have a really interesting lens through which to see everything else. And that’s going to stick with you a lot longer than trying to force yourself to study something that you don’t feel passionate about.

ANAHEED: How did you choose guitar as your instrument?

CARRIE: I had taken piano lessons when I was very young, but it didn’t feel that expressive to me—even though now I listen to piano music and think it’s very expressive. I just didn’t relate to it. Guitar seemed like a very good tool for angst. It has this flexibility and bendability to it, and it can take a lot of abuse. It also has a fragility; you can vacillate between something being very sweet and something being very angular and gritty, just within a matter of seconds. I liked how expressive it was. Also, I really like distortion. And, as a young person, I liked the way it amplified—it was exciting to have volume in my life. To play something loud, to fill a room—and then that room just gets bigger and bigger as you start to play out—that’s very exciting. I just thought, Oh, I didn’t realize I could be this loud, and heard so far away. That’s a really great feeling.