This Is How It Feels to Be Free

Feminism can be a prison if it’s all about the anger. 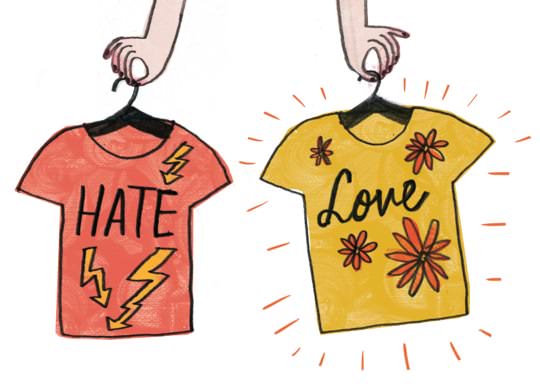 When I was younger, maybe 10 or 12 or 15, I used to say I hated men. I probably did. My feminism was born from anger—at them and at a world in which they seemed too powerful and too happy to take advantage of other people’s powerlessness. Second in line for my feminist wrath was women who seemingly made it harder on other women by giving in to men, using their looks and sex appeal to gain a piece of that power.

As I got older, I continued to judge women for being “complicit.” I judged them according to my definition of what being a woman with a full life meant. I judged moms who were “just” homemakers. I judged women who married young. I judged girls I knew who didn’t have any hobbies and just hung around watching boys play video games. I thought that since feminism had bum-rushed the patriarchy, every woman should be striving and fighting and aspiring, and to be a radical feminist meant you had to be at the frontlines of protest, doing clinic defense and giving your male friends a public browbeating if they made a remark that you thought was less than PC. I used feminism as a yardstick to constantly measure whether everyone else was right or wrong. And most of the time, they were wrong.

To me, the one true way to be a feminist was to always be fighting. In some ways I still believe that, though mainly I believe that feminism is an act of resisting a world that tells me women are shit (as are children, the poor, anyone who isn’t white and American, etc.). But the thing about fighting and having an ideology that is rooted in anger is that it’s incredibly exhausting. You constantly feel vulnerable, forever poised for a defensive attack. Being that person isn’t very fun, and it’s not particularly pleasant to be around.

About eight years ago, after I had been on a bell hooks tear—I had read almost all of her old books—I caught up to her new ones. She had just released The Will to Change: Men, Masculinity, and Love. There was a line towards the end of the introduction where she wrote about subconsciously waiting for men to die in order to feel like women could live a free life. The line took my breath away. I just started sobbing. I had spent so much time and energy reinforcing this idea in my head that men were my enemy, and it had made me so bitter and mistrusting of them and any woman that I felt was “on their side.” I had so much pain wrapped up in my politics. I knew I couldn’t continue like this any longer.

The rest of the book was a real awakening. I came to realize that for my feminism to sustain me, it needed to be based in love. I had to love men and accept that feminism was not just about liberating women from oppressive roles, but also liberating men and boys from their confines, from a society that tells them not to feel and to be straight and tough and have money and big dicks and to never complain. I also needed to love women and understand that everyone has their struggles, and even if I can’t see them, I needed to appreciate them. And just because you aren’t out busting through glass ceilings and spitting on cops doesn’t mean that you aren’t properly feminist. I needed to be inclusive, because it doesn’t do the cause or women any good to constantly label things “not feminist enough.” If I meet a girl who feels inspired and empowered by Taylor Swift, who thinks she’s the very definition of radical girl power, why not include her definition of girl power in mine? Why not seek solidarity with her instead of pointing out all the ways that Taylor Swift is not a fucking riot grrrl, you know? Why zealously call out other feminist books/bands/Tumblogs for not being perfect enough? We cannot always see the feminist struggle from the outside, but many women may be fighting for parity in their lives, whether they are professionally successful or work at tanning salons and don’t know what Planned Parenthood is.

The embarrassing reality of having had an ultra-dogmatic vision of what a feminist is and how she should look/act/sing/write was that it wasn’t very feminist of me. In fact, it was rather macho to be constantly ranking people according to my internalized hierarchy. The thing we as feminists know to be true is that women and girls (and brothers-in-struggle and other non-female allies) need our support, not our constant policing.

I don’t know exactly at what point I started to rearrange my feminism, to come from a place of love, but I remember how it took root: I saw my male roommates, friends, and bandmates in a different light, rather than thinking of them as variations on a stereotype. I realized that I wasn’t even considering that they might be as burdened by what the world expected of them as I was by what the world expected of me. I stopped assuming motives: “He just wants to sleep with me;” “He is only helping me because he thinks I am stupid.” I had empathy.

This change didn’t mean I stopped viewing the world with a critical eye—it actually made it easier to see the world rather than feel like I was blindly angry and at war with everything. I felt like my heart was still vulnerable to injustice and sadness, but so much more connected to the peace and power that came from having solidarity with other women, other feminists. I was no longer waiting for anyone to die so I could live. I was free. ♦