I guess we’re on week three now! Last Friday, we met up with readers in Salt Lake City, Utah, at the beautiful Gilgal Sculpture Garden to sit and talk about loving Martha Stewart ironically, and make banners, and steal one another’s souls. (One of these is a joke.) (We actually love Martha Stewart non-ironically.) 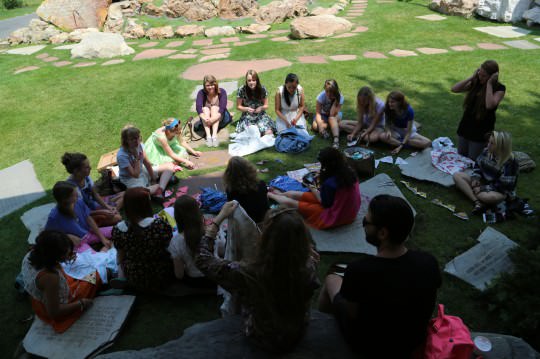 There were so many pairs of SISTERS at SLC, too, which was really sweet. 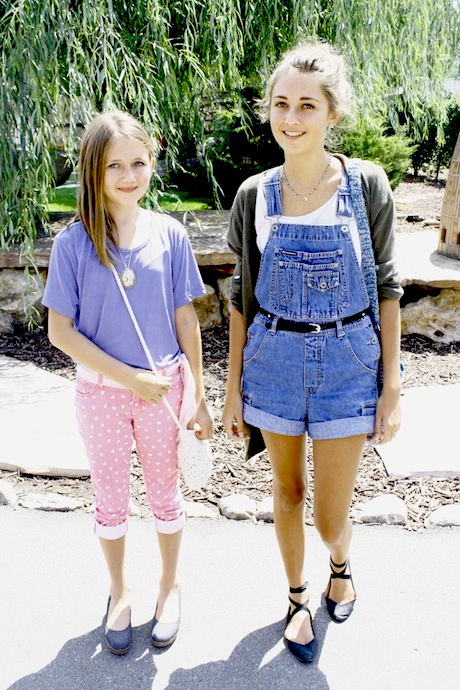 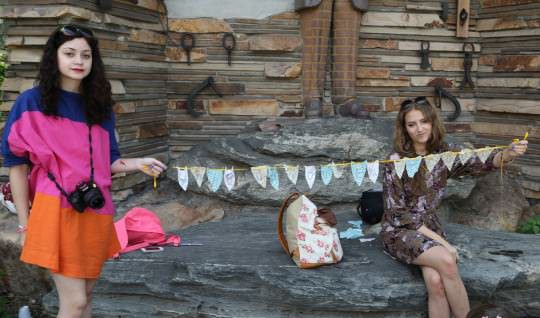 Anna’s banner said “WAKE UP YOU’RE NOT COOL,” as an homage to something she herself said to a cat we saw sleeping in a storefront window in Philly. I don’t know. 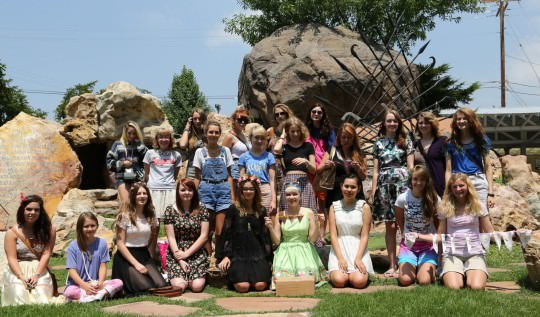 We got to Boise, Idaho, and started our next day with a pleasant bike ride along a river. All of us have been sick at some point on this trip, and it finally hit me to the point where I couldn’t go to the zine-making meet-up at Urban Outfitters that afternoon. But the meet-up looked super fun and zine-making-y and was set up all cute: 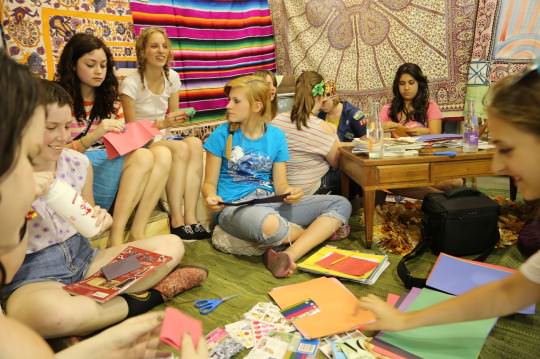 And I woke up to a very nice get-well card–nay, an EPIC NOVEL–from Anna: 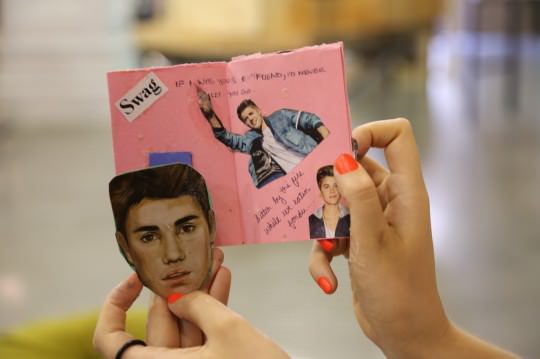 That night, Anna, Hazel, and I went back to the river to talk and be deep or something and then marveled at the punny possibilities of discussing BOYS in BOISE. I’ll give you a moment to process that. Now that you’ve adjusted to this new worldview that surely shattered your previous one… 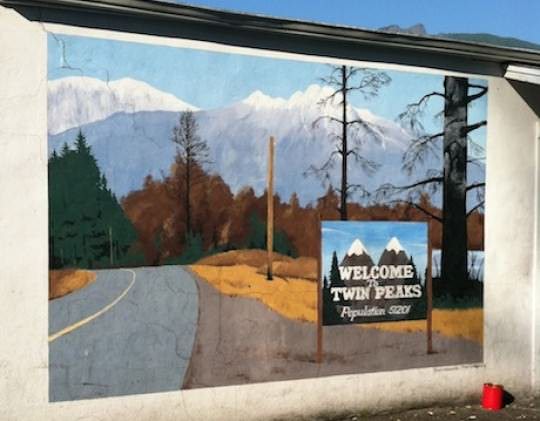 Our next meet-up was in Seattle, so on the drive up we took a slight detour to the spots in Washington where various parts of Twin Peaks were filmed. Unfortunately it wasn’t gray and rainy like a day in tribute to the show ought to be, but it was still crazy gorgeous, and we enjoyed playing the soundtrack in the car and crying dramatically. The original diner from the show burned down and the one they rebuilt just felt like a normal meh diner with a bunch of Twin Peaks photos on a wall in the back, but just seeing this Bob-esque guy from behind was rewarding enough: 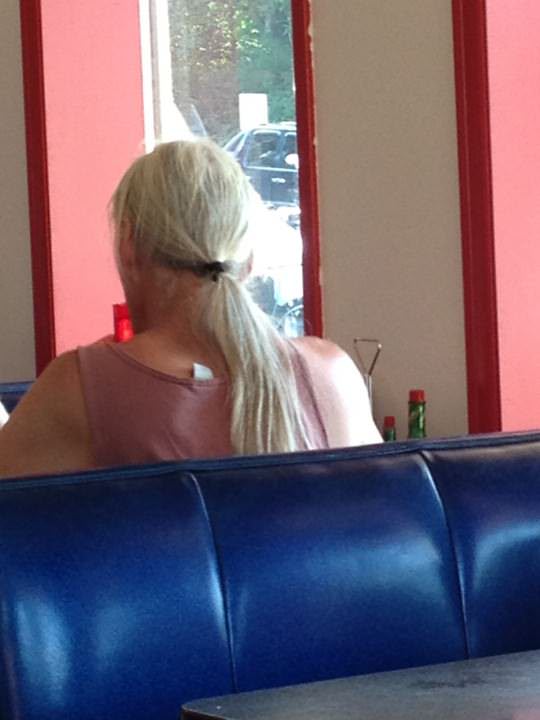 The next day, we were lucky to host crown-making and sunglasses-decorating (THE KEY: gluing shit on other shit) at the Vera Project, an awesome venue at the Seattle Center for cool stuff, like all-ages shows and gluing shit on other shit. This group was so good at it! We ran into a bunch of Rookie friends, too, like Audrey, Anna, and Osa from November’s Friend Crush: 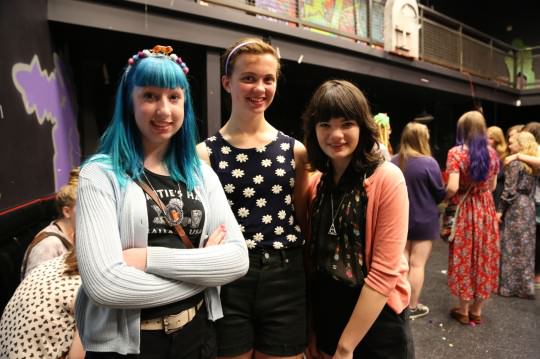 And Astrorice, of the famous video of a 13-year-old talking about slut-shaming and immediately defeating all WUT DUZ SHE NO SHE’S ONLY 13 arguments, and her friend: 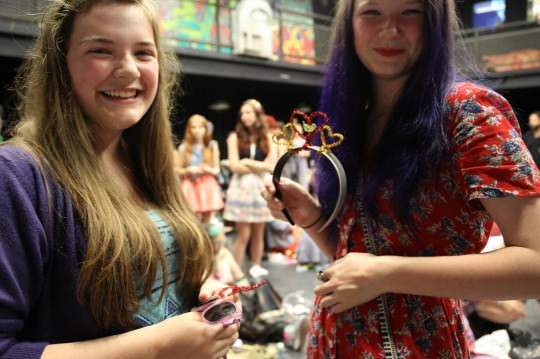 AND our own Chrissie: 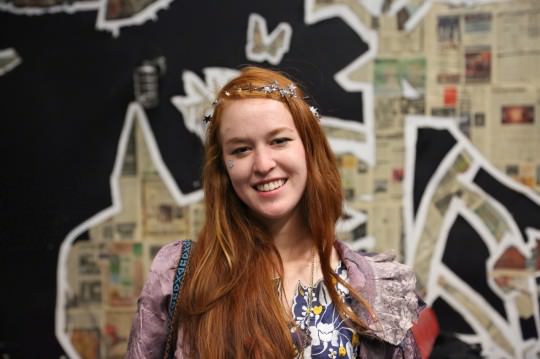 AAAAAAAAND the obligatory family photo, during the taking of which someone in one of the back rows shouted, “YOLO”: 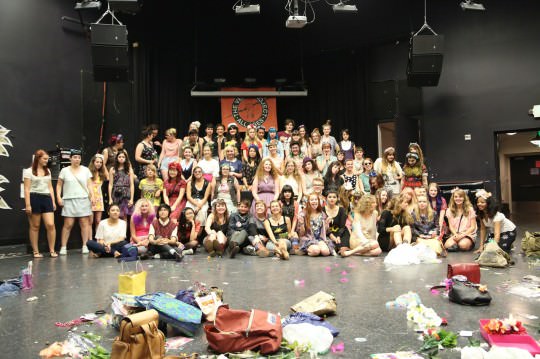 We only had four glue guns, but the long line forced people to socialize. One thing they all already had in common was crazy good style. The whole thing turned me into a mom who says things like, “You girls are so creative!” and “Go make friends!” Y’all are always wondering where the other Rookie readers where you live are and watching people figure it out is so fun.

Seattle readers also brought us nice goodies for the mutant-dollhouse-shrine-teenage-bedroom installation we are putting together in Los Angeles once we get there next week, including an engraved watermelon, a star-shaped box with Leonardo DiCaprio’s face inside, and this shiny bumper sticker: 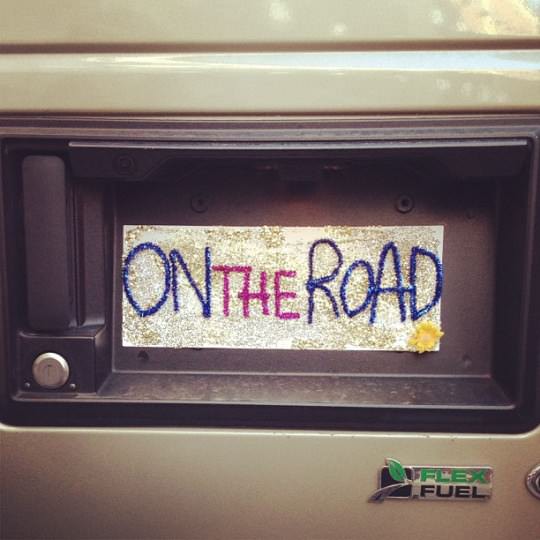 I think my favorite thing ever was getting these two CDs from identical twins, Lena and Nina. Lena’s was a compilation of her favorite Taylor Swift songs with three glitter-adorned pages explaining why she chose each one. Nina’s was a mix of songs by Seattle bands with three casually scrawled notebook pages of “badass” and “rad” descriptions. I was just so delighted that they are identical twins who are so different but best friends and both read Rookie and ALIKE BUT DIFFERENT LIKE TIA AND TAMERA BUT NOT LIKE THEIR WEIRD NEW BABIES SHOW MORE LIKE SISTER, SISTER AND AWWWW. 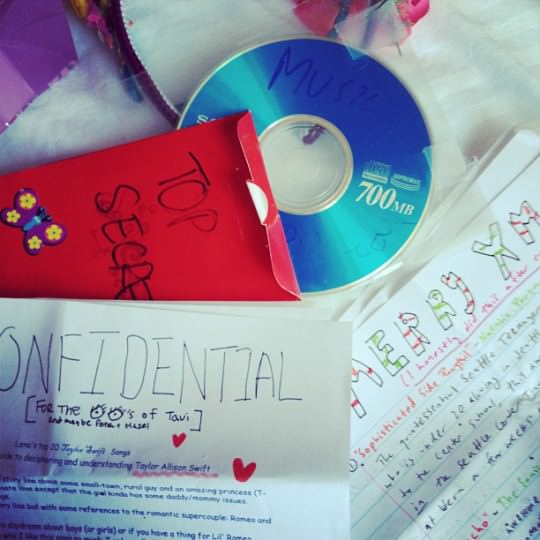 One reader, Eryn, traveled with her mom for five hours from Victoria in British Columbia to make it to the event, so we kidnapped her and brought her to a delicious home-cooked dinner that was generously made by Dylan’s mom Janet. Janet was just as awesome as you would expect the mom of someone so awesome to be. And it was nice being in a real home with the feeling of family and love that is generally lost at diners and hotels. She showed us Dylan’s baby pictures, and we all marveled at how cute she was and rad she is (before delving into some VICIOUS GOSSIP and doing a ritual burning of and laughing at the baby pics). 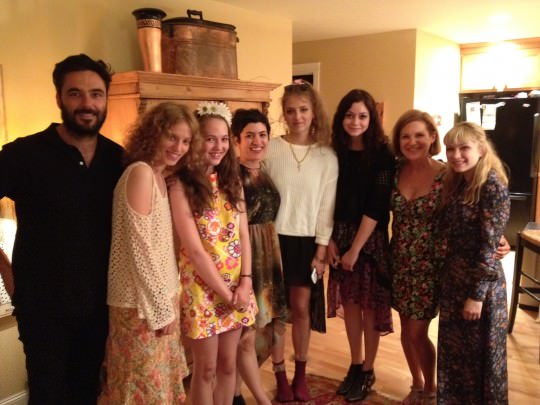 Eryn is the cute daisy one third from the left, Janet is the beautiful one second from the right.

Tuesday morning, we caught a good hotel breakfast viewing of The Wiggles, loaded the van, and headed for VOODOO DOUGHNUT in Portland, Oregon. They were the best doughnuts I have ever had in my life, and probably will ever have, so I should just die now. This is my ghost who is writing currently. Hello. 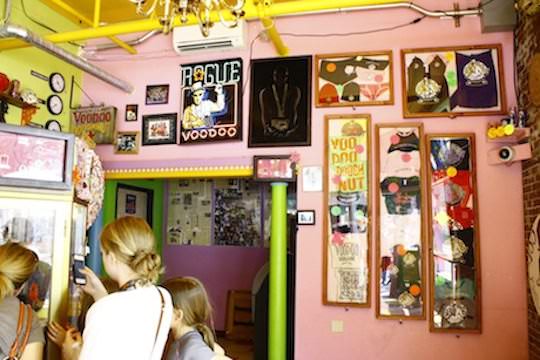 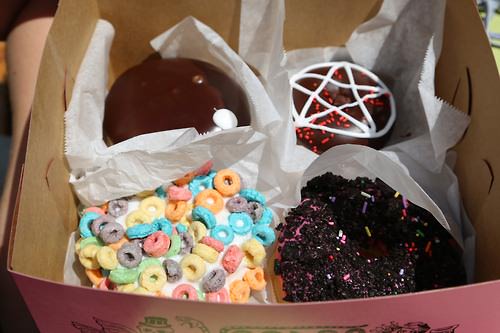 Yes, that is a doughnut covered in Froot Loops. In the bottom right corner, we have the ROOKIE COOKIE, a pink-frosted, Oreo-encrusted shenanigan they named and sold after us for that one day. 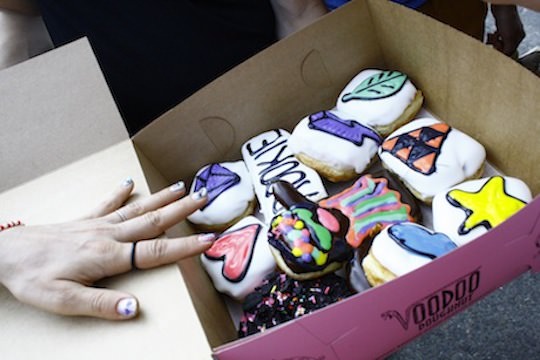 Our logo, plus frosting modeled after Anaheed's manicure.

Please bring your attention to this group shot of happily fed people in front of the gold doughnut glitter wall. Anaheed pressured me into singing a Norwegian troll lullaby my mom sings, but they all cooperatively joined in when I asked. This way, it was less awkward for one person (me), but more awkward for 30 people! If I have to go down, I’m bringing you all with me. 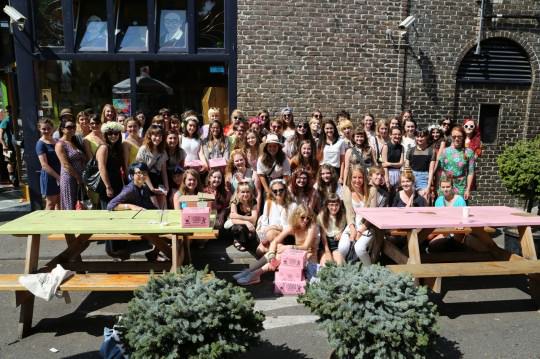 We loved Dylan’s mom Janet so much that we couldn’t bear to stay anywhere else on our next stop but with another mom named Janet. Olivia’s boyfriend, Cooper, invited us to stay at his family’s farm, and he, his mom, Jan, and his brother Rory were such a pleasant bunch. So were their goats, horses, dogs, and hot dogs. 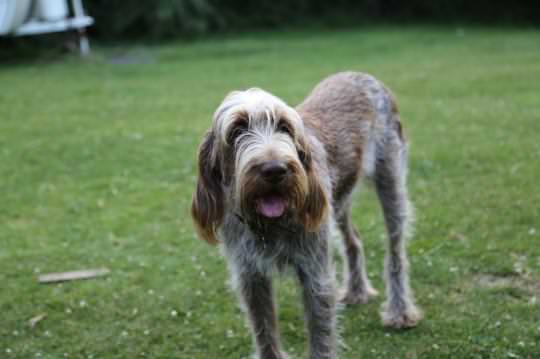 Zuppa, one of three adorable dogs. 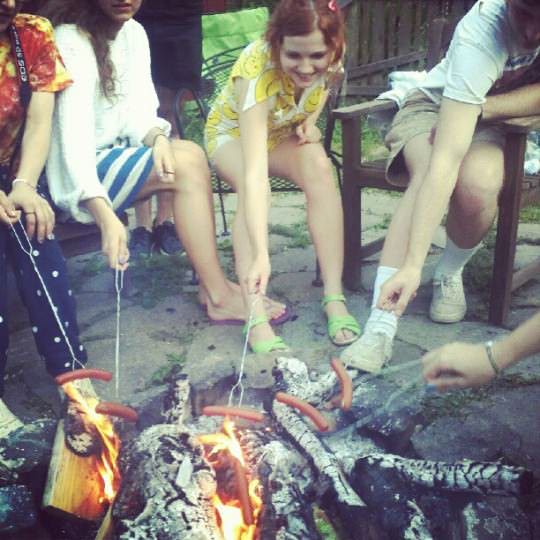 Marty, Barry, Dennis, Jay, and Curtis; five of many adorable hot dogs I named myself.

Here is Olivia, being cute in a smiley-face jumper, and being IN AWE of TECHNOLOGY. 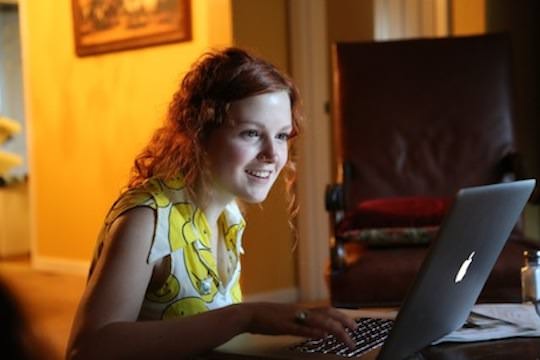 Olivia and Cooper generously set up a little fairy area for us, complete with old Girl Scout books and lots of comics: 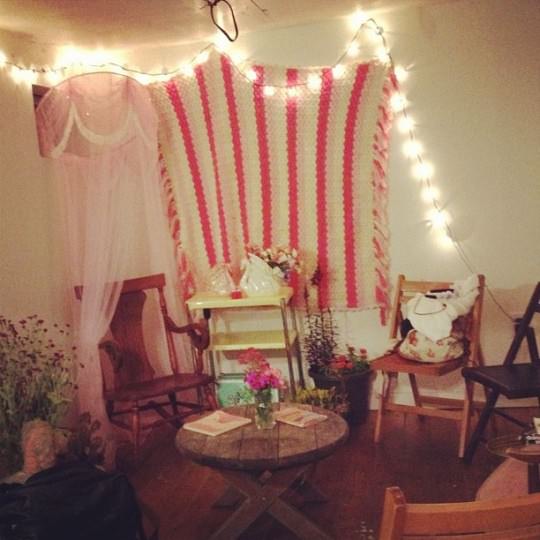 And we puffy-painted Olivia’s car, as she requires all passengers to do: 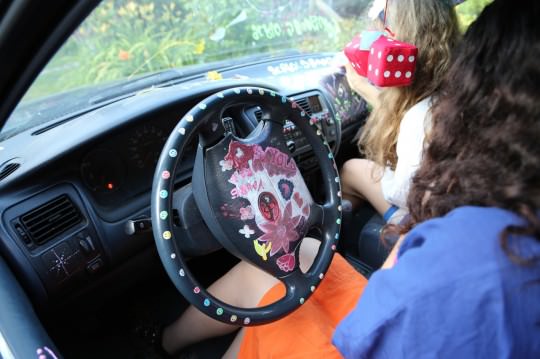 There had been an error on our part in organizing the second location we’d meet at after Voodoo, and it left a few readers stranded. (We suck.) In an attempt to make up for it, we met them the next day at Powell’s Books to look at books and magazines and Japanese stickers and sassy magnets. Other Portland activities included vintage shopping, taking pictures with Cooper’s family’s horses, and CHANGING LIVES (the horses’ lives). The next morning we headed for California, and finally got to play some Beach Boys in the car. We stopped at a Redwood forest to appreesh some nature and take creepy photos. 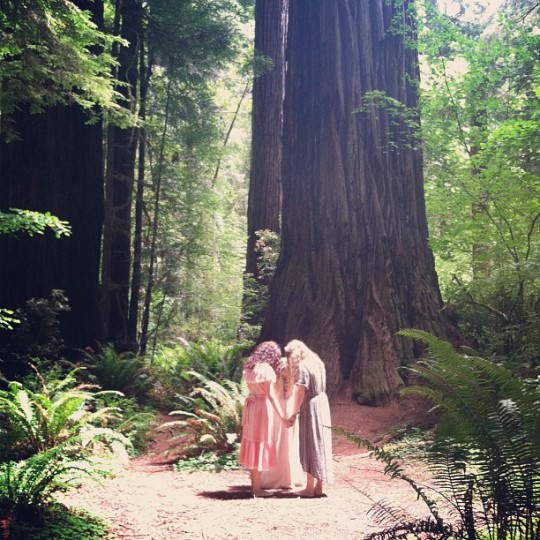 In the middle of the drive, Anaheed saw on her phone that Seventeen magazine now has a feature called “Ask an A-Lister,” in which famous dudes answer questions from readers about love and relationships. Because the feature started in May, after the video Jon Hamm did for our Ask a Grown Man had gotten attention, and because the name is so shamelessly close, I can’t help thinking that they got the idea from us. I’m flattered that they thought a feature from an independent publication that’s been around for less than a year and is edited by a teenager was good enough to copy for their own, more widely read publication. But if they’re going to copy something Rookie does, it would be really nice if it was something like not writing articles about how to improve your body before going back to school, or how to improve your body before going to the beach, or how to improve your personality before talking to a boy, because obviously you are straight and obviously that is an important skill and obviously you’re doing it wrong. I’m glad that petition to ban their use of Photoshop went around, but I don’t think their response really meant anything (though the visual that revealed all the ways Photoshop is used to make beige curtains look like blue curtains was absolutely eye-opening). I’m not saying Rookie is saving the world or that we don’t also have room for improvement. But if Seventeen is already looking to us for ideas on stuff to publish that girls like, I know that people like it when you don’t tell them how to fix themselves, or you don’t make a very public declaration of “body peace” that doesn’t mean much in the same publication that tells you to eat granola when you’re in the mood for a big-ass cookie.

Anyway, after the Redwoods, we drove into the eerie, gray town of Eureka. 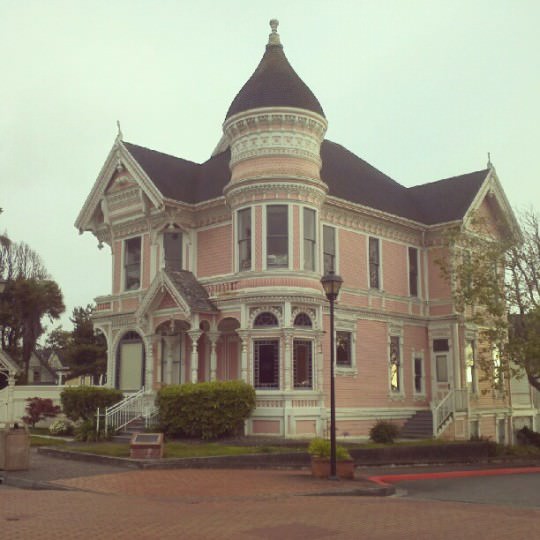 We met readers for ice cream and then did some vintage shopping at Shipwreck! and Little Shop of Hers. It was nice to have a small group in a small town and just talk and shop and eat (and pray and love). We heard all about how small and creepy it is here, which only made it more delightful and intriguing for us! Here we are, shoppin’ and posin’: 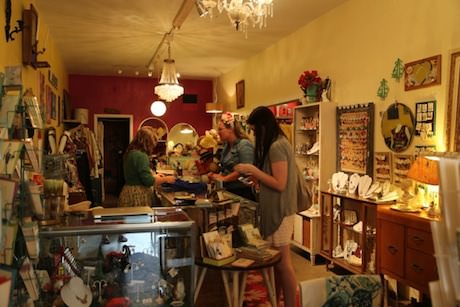 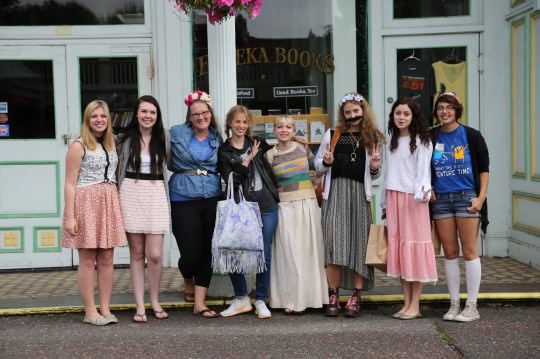 CliffNotes version: our readers continue to be the best, Redwoods are tall, I finally understand how they get those beige curtains in magazines to look so blue, sisters are sweet, so are moms named Jan, and WE LOVE DOUGHNUTS. ♦