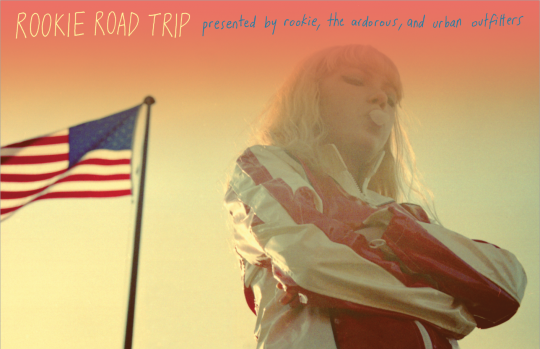 Our poster for the trip, photographed by Petra and designed by Kelly.

Los Angeles was our last stop on the Rookie Road Trip, and we dragged it out as long as we could, holding a whole week of events at the installation Petra and I created at Urban Outfitters’ Space 15 Twenty. Before I get all sappy and sad and reflective, we’ll start with last Saturday’s opening party. 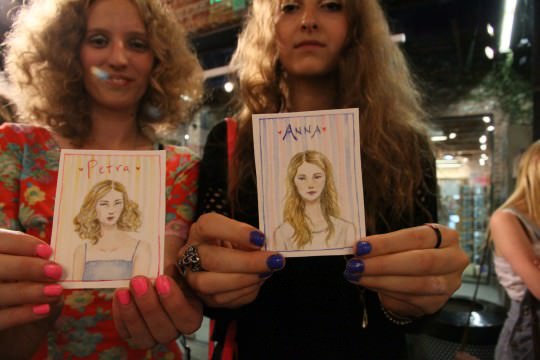 Petra and Anna with amazing portraits from a reader!

Petra, Avery, Anna, and I had been working at the space to set everything up till 4 AM the night before, and came back at 8 AM to finish, working basically till the very last minute. The problem with an installation that is of a messy teenage bedroom is that you could add pieces of crap obsessively and never know when to stop—at some point, we had to decide that EVERY BEDAZZLE WAS PLACED THE WAY IT SHOULD BE, and give it a rest. Once the party started, there were too many good vibes to even worry about whether or not a glow-in-the-dark ceiling star was positioned correctly, and it was just gratifying to see that so many people were noticing all the details we obsessed over and appreciating them. Friendliest, non-snobbiest art show ever. 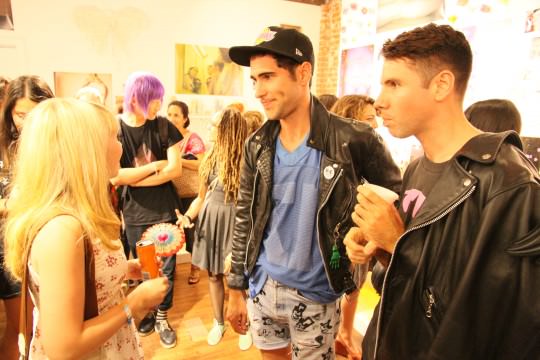 It was pretty packed, and the punch was delicious, and the ladies from Kleur were at a table outside giving discounted manicures, and a bunch of artists from Petra’s site were uniting, and Clara’s Cakes and Babycakes both brought vegan cupcakes. (Should I write CAKES one more time?) So, that was nice of all of them! P.S. Caaaaaaaakes. 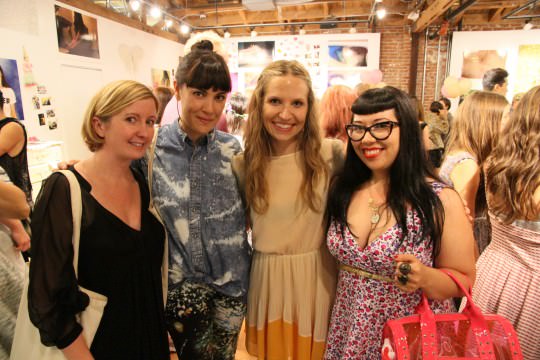 Sunday was the flea market, so people looked through the rack of vintage Urban Renewal sourced based off moodboards we sent and snatched up all the pieces we staffers had been eyeing all week but been too lazy to buy. We also got horchatas and took photo booth pictures, and Clara was back, and I got this INCEPTION cookie, and it was the best thing I have ever experienced. 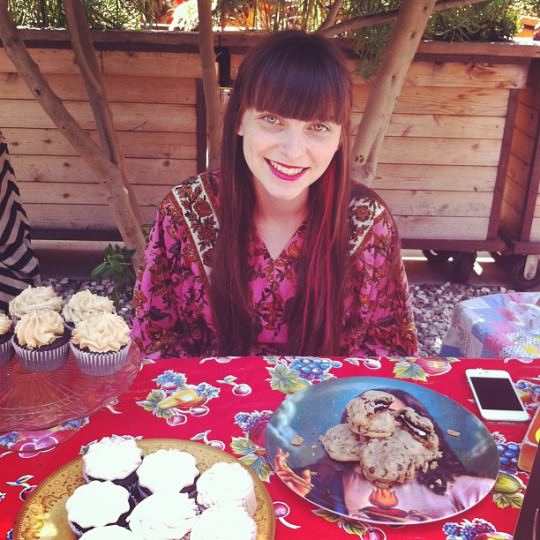 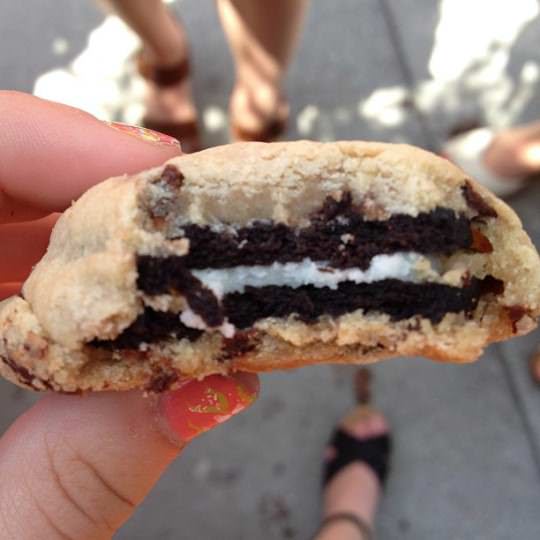 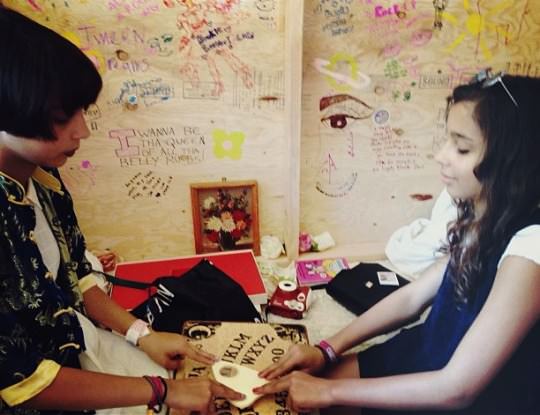 Monday we had a Freaks and Geeks pajama party, screening the first two episodes of the series—classic favorites for fans, and an introduction for newbies. There was a perfect mix of both, and everyone was excited and laughing and mouthing lines together. Plus, friendship bracelets! 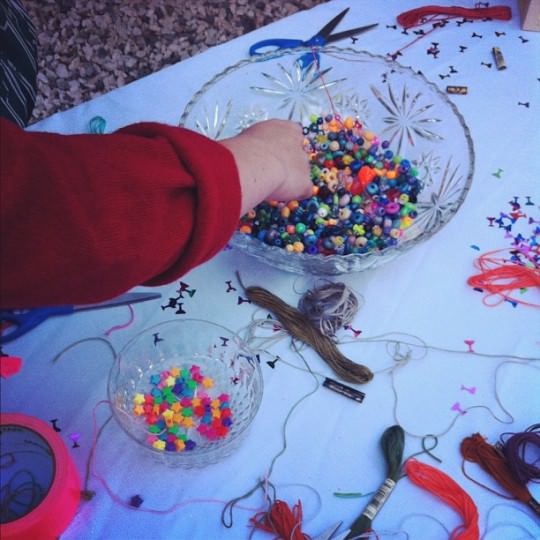 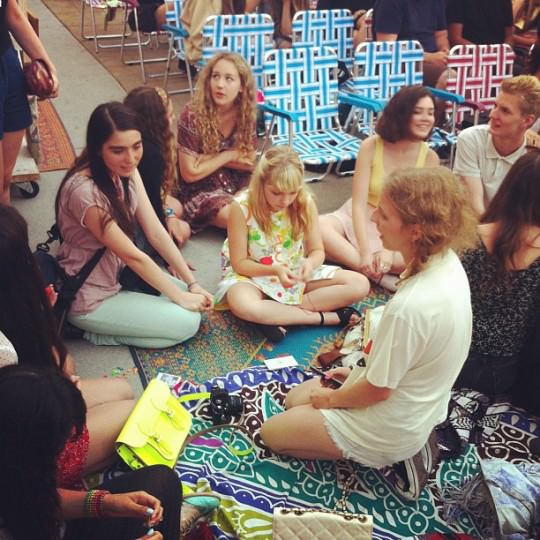 Then, to complete the night of unabashed geeking out, John Francis Daley, aka SAM WEIR ALL GROWN UP, came for a Q&A. Did you know the blue Parisian nightsuit from the episode “Looks and Books” was auctioned off to a middle-aged man JFD found creepy? YOU DO NOW. 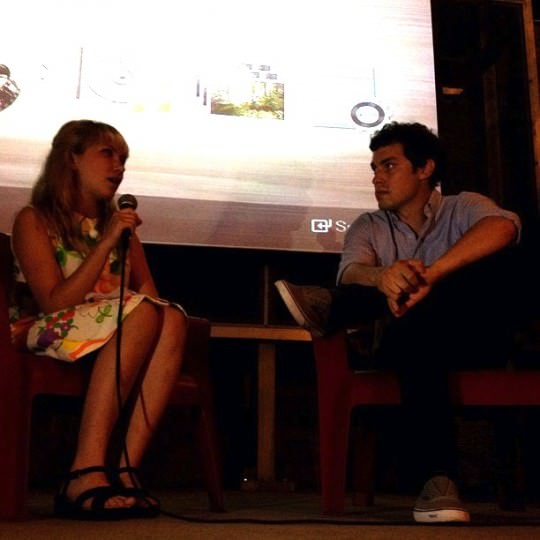 Tuesday was crown-making DIY night. Between the canopy in the installation, floral halos, and general glitterfication of everyone and everything in the room, the night kind of looked like heaven. When we ran out of headbands, some girls got crafty and made corsages instead. I’m honored that we have such a resourceful readership. 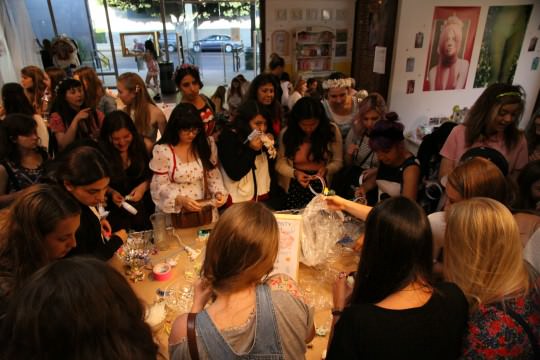 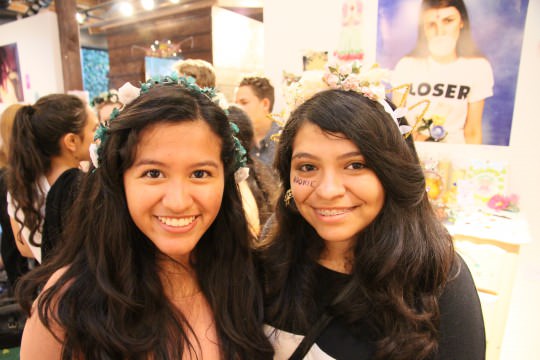 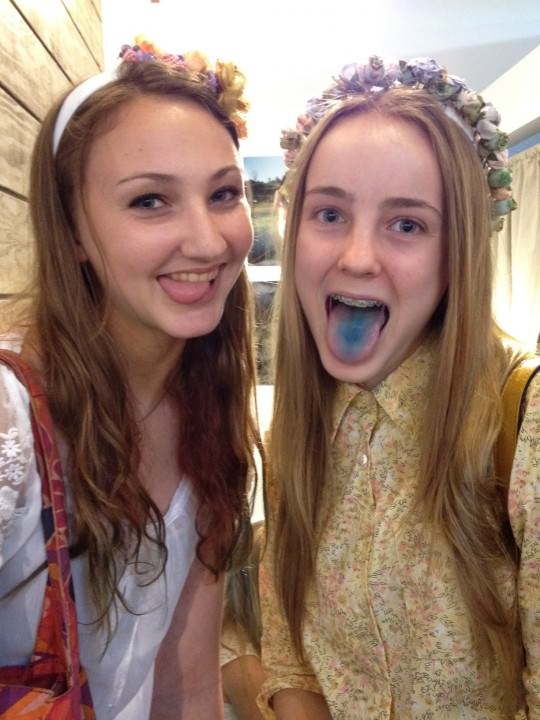 Adorable crowns, plus a blue tongue! 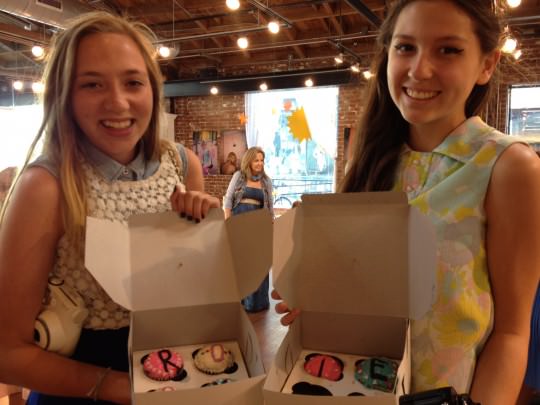 Wednesday was movie night, and we went with the teen-girl classic Clueless. It seemed perfect, as even the most un-girly girls I know love that movie because it’s just smart and funny and pokes a bit of fun at the girliness without totally losing any compassion for its characters. The costume designer Mona May came just to say hi, and said she was so happy with the mix of ages of girls and women coming to watch, so many of us already knowing all the lines. 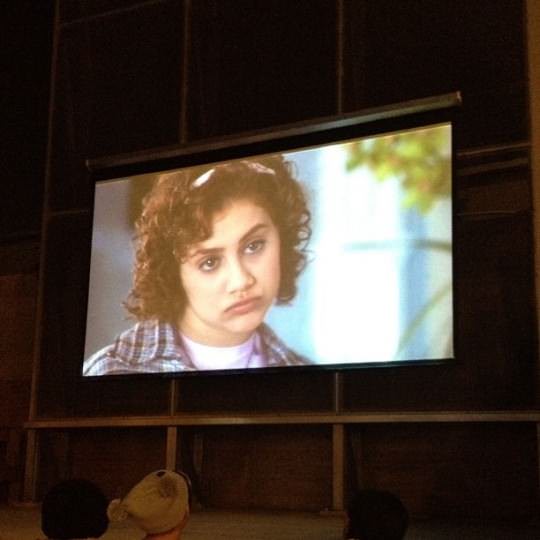 "You're a virgin who can't drive."

In other news, I was knighted into a girl gang with this awesome jacket, and Dylan got to town, so a few of us went to IHOP and got physically sick from their pancakes. I took a picture of the pancakes, but deleted it out of anger. 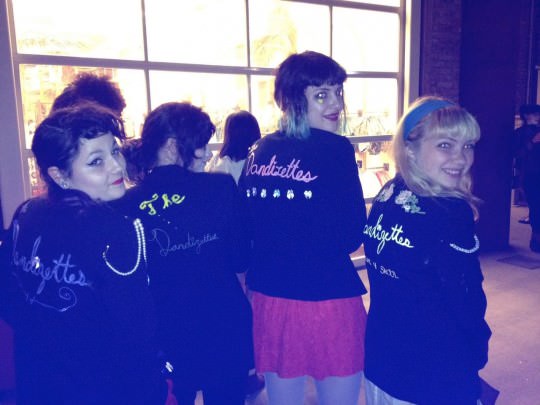 Oh, I don't know, just a perfect embodiment of everything I like, AS A JACKET.

Thursday’s event tied with our closing party for my favorite. Mindy Kaling came for a Q&A, and was so nice and funny and all good things. And I know you’re like, “DUH, she’s Mindy Kaling!” but I just need to emphasize how awesome it is that she stayed so long and answered people’s questions and took pictures with them and talked about her best and worst teen memories and gave advice about getting into comedy. One thing I remember almost word-for-word is her saying that if you want to go into comedy, there will be a lot of cliques, but you don’t need to worry about the social side of whatever industry you want to be in, “you just need to be really good.” Like, good at your job/skill/talent/craft. Then she said it was probably just her justifying to herself why she doesn’t go out, because she’s funny, but proceeded to reassure us all that being a nerd and getting obsessed with stuff and watching movies obsessively is the right way to do research, and trying to join cliques is not. I am SO EXCITED for her show in September. Thank you, Mindy! 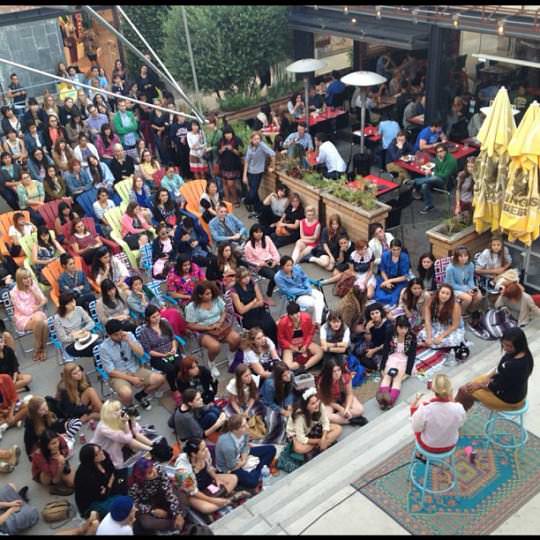 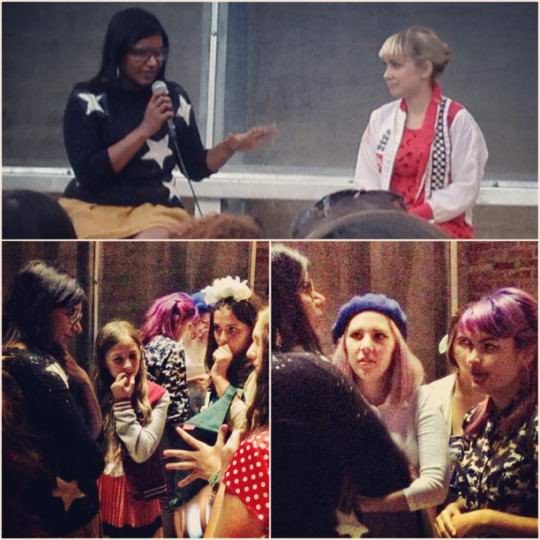 Mindy getting interviewed and saying hi to people with charm and grace. Photo by @waitwhatnow on Instagram

Friday we held story hour, where writers read Rookie articles we’d written out loud, and the people sitting outside next door at Umami Burger seemed very confused. Here we all are—Dylan, Hazel, Katherine, Lesley, Marie, and two of our guest writers, Shannon and Kirsten. I think it went so well because Marie and I went shopping for good-vibes crystals just before. 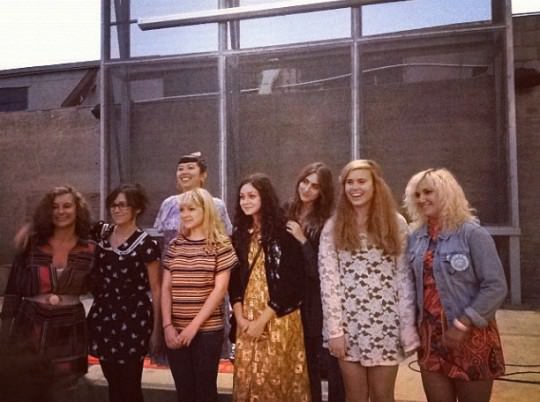 Now, SATURDAY. Saturday was a magical prom of dreams. People actually danced, for one. Most of them wore pastels, and it matched all the cotton candy, for another. (The people who didn’t wear pastels looked awesome too, obviously. Like, I saw more than one tartan suit.) To top it all off, Bleached played! And to top THAT off, balloons fell from the sky (OK, the balcony) when they started their last song! 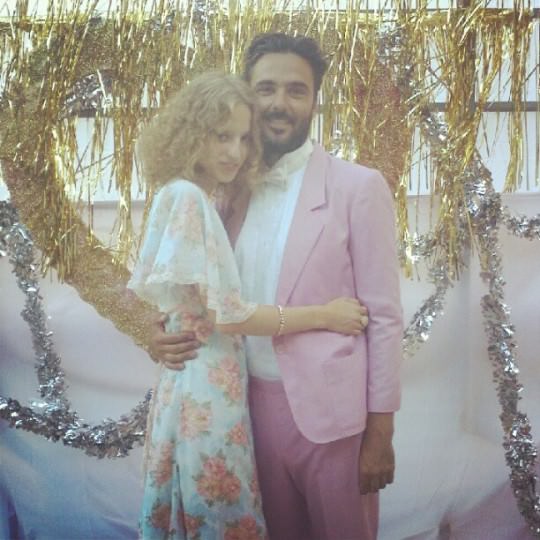 Petra and Avery, who found his suit in the women's section of a thrift store. 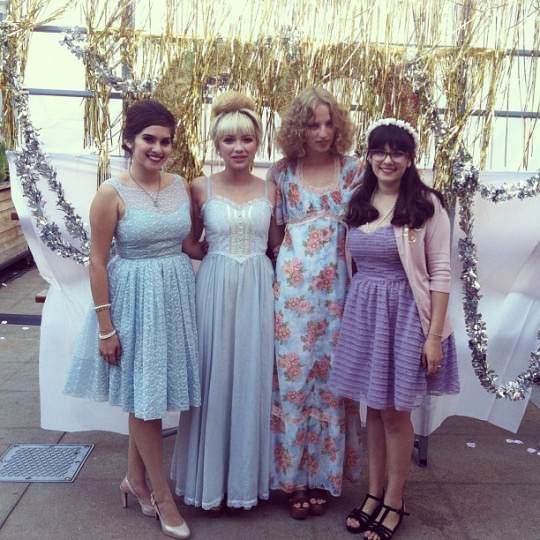 Petra and me with twin sisters who came to EVERY event, Elena and Sarah. Saying bye to them felt like the last day of camp. 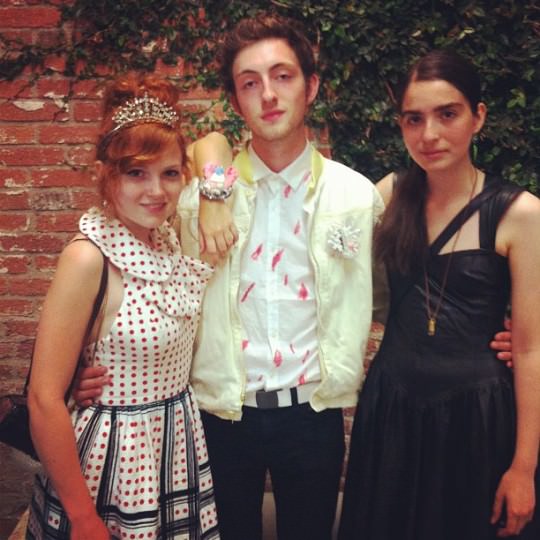 Olivia; her boyfriend, Cooper (who gave us a home in Portland); and Tara. Please note their matching rocket-ship corsages. Photo by @space15twenty on Instagram

I don’t think I can go to a real school dance after this, because none of them will be as fun or as sparkly. Everyone looked great and seemed happy and screamed along to “Cherry Bomb,” started a conga line during “Love Train,” and slow-danced to “Tiny Dancer.” Bleached KILLED IT, and it was the most girls I’ve ever seen in a mosh pit, and a security guy from the space kept trying to break it up, and Jennifer from Bleached was all, “Dude, it’s cool,” and then he finally left after she kept touching his head while she was singing. He let himself smile for a split second. NOT EVEN SECURITY DUDE COULD HELP BUT SUBMIT TO THE BRAINWASHING ABILITIES OF A BLEACHED PROM. 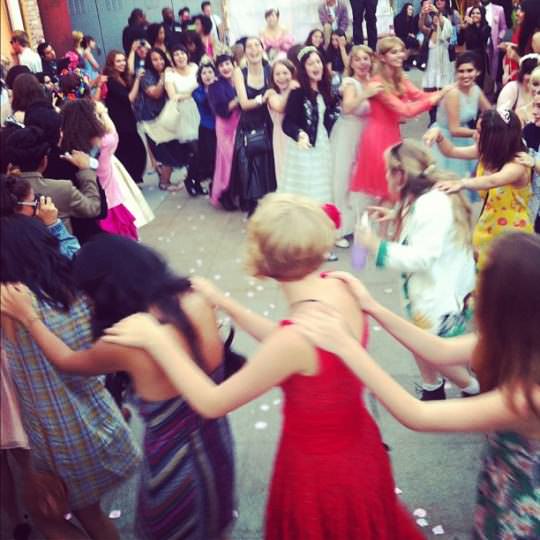 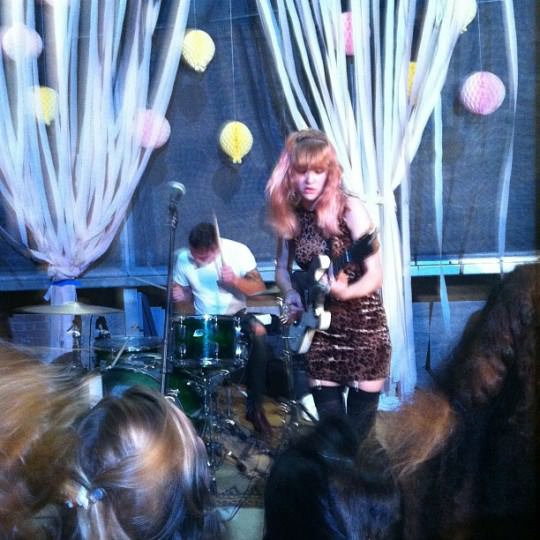 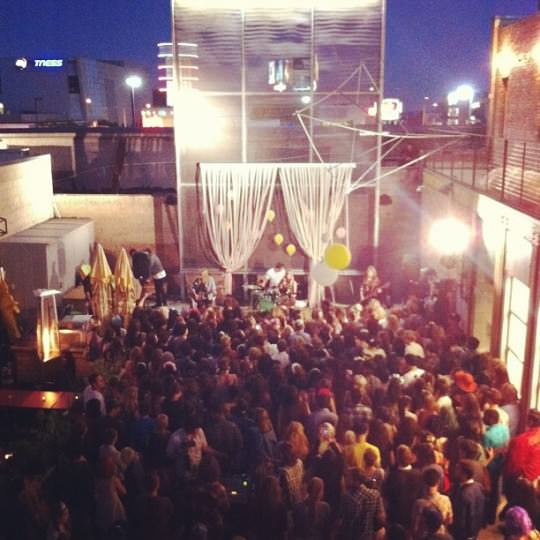 On Sunday, we took down the installation, marking the official end of the Rookie Road Trip. It’s very strange to have worked on this “Rookie” thing from behind a computer for over a year now, to be so used to my own private, hermit memories of the experiences—both pop-cultural and personal—that we write about, and to suddenly experience all of that in the most REAL LIFE, 3D, HD, IMAX way possible. This meant meeting our readers almost every day for a month total, and turning a blank space into our dream world.

Uninstalling the show was emotional, and packing up all the souvenirs girls brought us on the road was completely overwhelming, but writing this now, I’m not sad. I can’t remember any of the expectations for the trip that I had before we started because everything happened the way it should have. Obviously, I’m not the only person who works on Rookie, but not even our staff is wholly responsible for making it what it is. Now that we’re almost a year down the road, it’s taken on a life of its own as a combination of our contributions and the amazing community that our readers have helped to create. Getting to hear in person what this has meant to some of our readers was gratifying, but watching everyone talk to one another and seeing friendships begin with Rookie as just the first thing people had in common was more rewarding than I can say.

Talking about feeling lucky and thanking people are both cheesy and overdone, but seriously: we are SO LUCKY and SO THANKFUL. We got to travel across the country and meet our readers and take over an art space for a week to create a place for girls to meet and craft and dance. HUGE thanks to everyone at Urban Outfitters and Space 15 Twenty, also, for entrusting two teenagers with their space for over a week and helping us bring our ideas of a Rookie/The Ardorous dream world to life. Thanks to everyone who could make it. So much of that dream-come-true relied on the attitude of the readers who joined us, so the biggest, fattest thanks to everyone who came, brought their enthusiasm, and spread it around. We know you’re all smart and cool, so these events could have felt really elitist, but they weren’t.

And now, I encourage you all to organize your own Rookie meetups—we were only the hosts, after all, so you can totally pull it off! I try to never explicitly mention the goals of Rookie because I’m constantly terrified that we’re not meeting them. One, however, is just to attempt to suck out even a fraction of the sadness that exists in the world. I don’t know if you’re sad or not, but you guys are always talking about trying to find other Rookie readers, who are probably likeminded humans, where you live, so you have all of our blessings and encouragement in seeking them out. Then, there will be a little less sadness in one corner of the world, and maybe even a few new friendships, and a few new flower crowns or zines or photos. That sounds pretty good to me. ♦